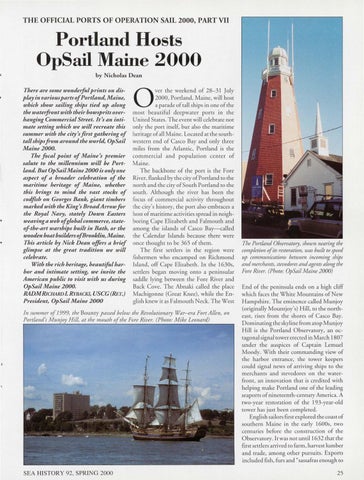 OpSail Maine 2000 by Nicholas Dean There are some wonderful prints on display in various parts ofPortland, M aine, which show sailing ships tied up along the waterfront with their bowsprits overhanging Commercial Street. It&#39;s an intimate setting which we will recreate this summer with the city&#39;s first gathering of tall ships from around the world, OpSail Maine2000. The focal point of Maine&#39;s premier salute to the millennium will be Portland. But OpSailMaine 2000 is only one aspect of a broader celebration of the maritime heritage of Maine, whether this brings to mind the vast stocks of codfish on Georges Bank, giant timbers marked with the King&#39;s Broad Arrow for the Royal Navy, stately Down Easters weaving a web ofglobal commerce, stateof the-art warships built in Bath, or the wooden boat builders ofBrooklin, Maine. This article by Nick Dean offers a brief glimpse at the great tradition we will celebrate. With the rich heritage, beautiful harbor and intimate setting, we invite the American public to visit with us during OpSail Maine 2000. RADMRICHARDL RYBACKI, USCG (RET.) President, OpSail Maine 2000

ver the weekend of 28-3 1 July 2000, Portland, Maine, will host a parade of rail shi ps in one of the mos t beauti fu l deepwater ports in the Uni ted States. T he event will celebrate not only the port itself, but also the maritime he ritage of all Maine. Located at the somhwestern end of Casco Bay and only three miles fro m the Atlanti c, Portland is the co mmercial and popul ati o n center of Maine. T he backbone of th e port is the Fo re Rive r, flanked by the city of Po rtland to the north and the city of South Portland to the somh . Although the river has been the foc us of commercial activity th ro ughout the city&#39;s histo ry, the po rt also embraces a hos t of maritime activities spread in neighbo ring Cape Eliza beth and Falmouth and among the islands of Casco Bay- called the Calendar Islands because there were once thought ro be 365 of them. T he first settlers in the region were fis hermen who encamped on Richmond Island, off Cape Elizabeth. In the 163 0s, settlers began moving onto a peninsular saddle lying between the Fore Rive r and Back Cove. T he Abnaki called the place M achigonne (Great Knee), while the English knew it as Falm outh Neck. T he W est

In summer of 1999, the Bounty passed below the Revolutionary War-era Fort Allen, on Portland&#39;s Munjoy H ill, at the mouth ofthe Fore River. (Photo: Mike Leonard)

The Pordand Observatory, shown nearing the completion ofits restoration, was built to speed up communications between incoming ships and merchants, stevedores and agents along the Fore River. (Photo: OpSail Maine 2 000)

End of the peninsula ends on a high cliff which faces the White M ountains of New H ampshire. T he eminence called Munjoy (originally M ountj oy&#39;s) Hill, to the northeast, rises fro m the shores of Casco Bay. D ominating the skyline fro m atop Mun joy Hill is the Portland O bservato ry, an octagonal signal rower erected in M arch 1807 under the auspices of Captain Lemuel Moody. W ith their commanding view of the harbor entrance, the rower keepers co uld signal news of arriving ships to the merchants and stevedores on the waterfron t, an innovation that is credited with helping make Portland one of the leading seaports of nineteenth-centu ry America. A two-yea r restoration of the 193-year-o ld rowe r has just been completed. English sailors first explored the coas t of southern M aine in the early 1600s, rwo centuries before the construction of the Observatory. Ir was nor until 1632 tharrhe first settlers arrived to farm, harves t lumber and trade, among other pursuits. Exports included fish , furs and &quot;sassafras enough to 25