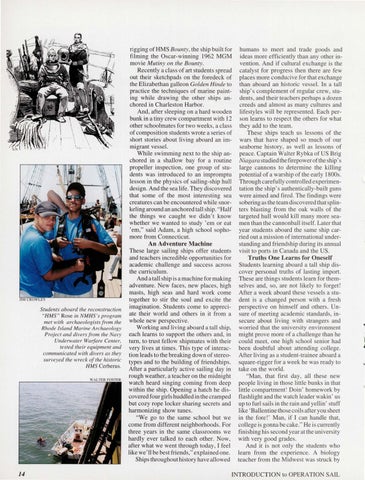 Students aboard the reconstruction &quot;HMS &quot; Rose in NMHS &#39;s program met with archaeologists from the Rhode Island Marine Archaeology Project and divers from the Navy Underwater Warfare Center, tested their equipment and communicated with divers as they surveyed the wreck of the historic HMS Cerberus.

rigging of HMS Bounty, the ship built for humans to meet and trade goods and filming the Oscar-winning 1962 MGM ideas more efficiently than any other inmovie Mutiny on the Bounty. vention. And if cultural exchange is the Recently a class of art students spread catalyst for progress then there are few out their sketchpads on the foredeck of places more conducive for that exchange the Elizabethan galleon Golden Hinde to than aboard an historic vessel. In a tall practice the techniques of marine paint- ship&#39;s complement of regular crew, stuing while drawing the other ships an- dents, and their teachers perhaps a dozen chored in Charleston Harbor. creeds and almost as many cultures and And, after sleeping on a hard wooden lifestyles will be represented. Each perbunk in a tiny crew compartment with 12 son learns to respect the others for what other schoolmates for two weeks, a class they add to the team. of composition students wrote a series of These ships teach us lessons of the short stories about living aboard an im- wars that have shaped so much of our migrant vessel. seaborne history, as well as lessons of While swimming next to the ship an- peace. Captain Walter Rybka of US Brig chored in a shallow bay for a routine Niagara studied the firepower of the ship&#39; s propeller inspection, one group of stu- large cannons to determine the killing dents was introduced to an impromptu potential of a warship of the early 1800s. lesson in the physics of sailing-ship hull Through carefully controlled experimendesign . And the sea life. They di scovered tation the ship&#39;s authentically-built guns that some of the most interesting sea were aimed and fired. The findings were creatures can be encountered while snor- sobering as the team discovered that splinkeling around an anchored tall ship. &quot;Half ters blasting from the oak walls of the the things we caught we didn&#39;t know targeted hull would kill many more seawhether we wanted to study &#39;em or eat men than the cannonball itself. Later that &#39;em,&quot; said Adam, a high school sopho- year students aboard the same ship carmore from Connecticut. ried out a mission of international underAn Adventure Machine standing and friendship during its annual These large sailing ships offer students visit to ports in Canada and the US. Truths One Learns for Oneself and teachers incredible opportunities for academic challenge and success across Students learning aboard a tall ship disthe curriculum. cover personal truths of lasting import. And a tall ship is a machine for making These are things students learn for themadventure. New faces, new places, high selves and, so, are not likely to forget! masts, high seas and hard work come After a week aboard these vessels a stutogether to stir the soul and excite the dent is a changed person with a fresh imagination. Students come to appreci- perspective on himself and others. Unate their world and others in it from a sure of meeting academic standards, inwhole new perspective. secure about living with strangers and Working and living aboard a tall ship, worried that the university environment each learns to support the others and, in might prove more of a challenge than he turn, to trust fellow shipmates with their could meet, one high school senior had very lives at times. This type of interac- been doubtful about attending college. tion leads to the breaking down of stereo- After living as a student-trainee aboard a types and to the building of friendships. square-rigger for a week he was ready to After a particularly active sailing day in take on the world. rough weather, a teacher on the midnight &quot;Man, that first day, all these new watch heard singing coming from deep people living in those little bunks in that within the ship. Opening a hatch he dis- little compartment! Doin &#39; homework by covered four girls huddled in the cramped flashlight and the watch leader wakin &#39; us but cozy rope locker sharing secrets and up to furl sails in the rain and yellin&#39; stuff harmonizing show tunes. like &#39; Ballentine those coils after you sheet &quot;We go to the same school but we in the fore! &#39; Man , if I can handle that, come from different neighborhoods. For college is gonna be cake.&quot; He is currently three years in the same classrooms we finishing his second year at the university hardly ever talked to each other. Now, with very good grades. after what we went through today, I feel And it is not only the students who like we&#39; II be best friends,&quot; explained one. learn from the experience. A biology Ships throughout history have allowed teacher from the Midwest was struck by INTRODUCTION to OPERATION SAIL