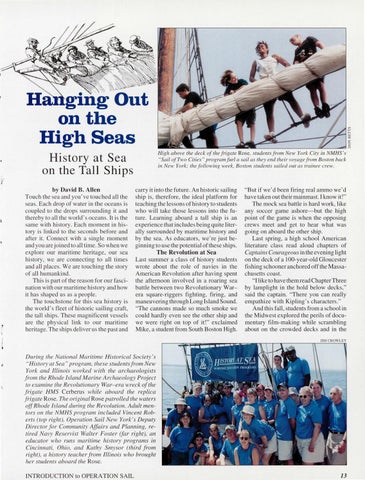 High above the deck of the frigate Rose, students from New York City in NMHS 's "Sail of Two Cities" program fu rl a sail as they end their voyage from Boston back in New York; th e follow ing week, Boston students sailed out as trainee crew.

History at Sea on the Tall Ships by David B. Allen Touch the sea and you've touched all the seas. Each drop of water in the oceans is coupl ed to th e drops surrounding it and thereby to a ll the world's oceans. It is the same with hi story. Each moment in hi story is linked to the seconds before and after it. Connect with a single moment and you are joined to all time. So whe n we explore our maritime heritage, our sea hi story, we are connecti ng to a ll times and all places. We are touchin g the story of all hum ankind. Thi s is part of the reason for our fascinati on with our maritime hi sto ry and how it has shaped us as a people. The touchstone for thi s sea hi story is the world 's fl eet of historic sailing craft, the tall ships. These magnifice nt vessels are the physical link to our maritime heritage. The ships deli ver us the past and

carry it into the future. An hi stori c sailing ship is, therefore, the idea l platform for teachjng the lessons of hi story to students who will take those lessons into the future. Learning aboard a tall ship is an experience that includes being quite literall y surrounded by maritime hi story and by the sea. As educators, we ' re just beginning to use the potenti al of these ships. The Revolution at Sea Last summer a class of hi story students wrote about the role of nav ies in the American Revo lutio n after hav ing spent the afternoon in vo lved in a roaring sea battle between two Revolutionary Warera square-riggers fi ghting, firing , and maneuvering through Long Island Sound. "The cannon s made so much smoke we could hardl y even see the other ship and we were ri ght on top of it!" exclaimed Mike, a student from South Boston High.

"B ut if we' d been firin g real ammo we' d have taken out their mainmast. I know it!" The mock sea battle is hard work, like any soccer game as hore-but the hi gh point of the game is when the opposing crews meet and get to hear what was going on aboard the other ship . Last spring, a hi gh school American literature class read aloud chapters of Captains Courageous in the evening light on the deck of a 100-year-old Gloucester fishing schooner anchored off the Massachu setts coast. "I Iike to have them read Chapter Three by lamplight in the hold below decks," said the captain . "There you can really empathi ze with Kipling 's characters." And this fall , students from a school in the Midwest explored the perils of docume ntary film-making while scrambling about on the crowded decks and in the

During the National Maritime Historical Society's "History at Sea " program, these students from New York and Illinois worked with the archaeologists from the Rhode Island Marine A rchaeology Project to examine the Revolutionary War-era wreck of the frigate HMS Cerberus while aboard the replica frigate Rose. The original Rose patrolled the waters off Rhode Island during the Revolution. Adult mentors on the NMHS program included Vincent Roberts (top right), Operation Sail New York's Deputy Director for Community Affairs and Planning, retired Navy Reservist Walter Foster (jar right), an educator who runs maritime history programs in Cincinnati, Ohio, and Kathy Smysor (third from right), a history teacher from Illinois who brought her students aboard the Rose. INTRODUCTION to OPERATION SAIL