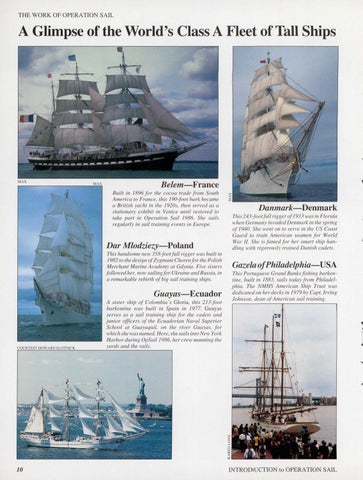 THE WORK OF OPERATION SAIL

A Glimpse of the World&#39;s Class A Fleet of Tall Ships

Belem-France Built in J896 for the cocoa trade from South America to France, this 190-foot bark became a British yacht in the 1920s, then served as a stationary exhibit in Venice until restored to take part in Operation Sail 1986. She sails regularly in sail training events in Europe.

Dar Mlodziezy-Poland This handsome new 358-footfull rigger was built in 1982 to the design ofZygmunt Chorenfor the Polish Merchant Marine Academy at Gdynia. Five sisters followed her, now sailing for Ukraine and Russia, in a remarkable rebirth of big sail training ships.

A sister ship of Colombia &#39;s Gl ori a, this 213-foot barkentine was built in Spain in 1977. Guay as serves as a sail training ship for the cadets and junior officers of the Ecuado rian Naval Superior School at Guayaquil, on the river Guayas, for which she was named. Here, she sails into New York Harbor during OpSail 1986, her crew manning the yards and the rails.

Danmark-Denmark This 243-footfull rigger of 1933 was in Florida when Germany invaded Denmark in the spring of 1940. She went on to serve in the US Coast Guard to train American seamen for World War fl. She is famed for her smart ship handling with rigorously trained Danish cadets.