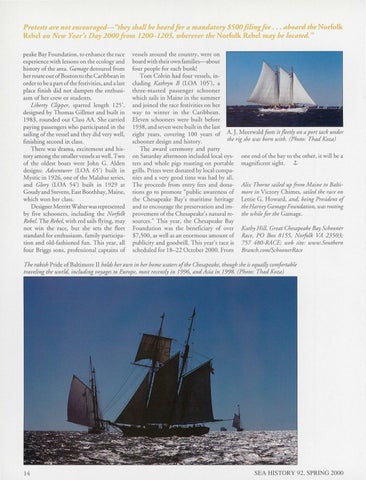 Protests are not encouraged- &quot;they shall be heardfor a mandatory $500 filingfee ... aboard the Norfolk Rebel on New Year&#39;s Day 2000 from 1200-1205, wherever the Norfolk Rebel may be located.&quot; peake Bay Foundation, to enhance the race experience with lessons on the ecology and history of the area. Gamage detoured from her route out of Boston to the Caribbean in order to be a part of the festivities, and a last place finish did not dampen the enthusiasm of her crew or students. Liberty Clipper, sparred length 125&#39;, designed by Thomas Gillmer and built in 1983, rounded out Class AA. She carried paying passengers who participated in the sailing of the vessel and they did very well, finishing second in class. There was drama, excitement and history among the smaller vessels as well. Two of the oldest boats were John G. Alden designs: Adventurer (LOA 65&#39;) built in Mystic in 1926, one of the Malabar series, and Glory (LOA 54&#39;) built in 1929 at Goudy and Stevens, East Boothbay, Maine, which won her class. Designer Merritt Walter was represented by five schooners, including the Norfolk Rebel. The Rebel, with red sails flying, may not win the race, but she sets the fleet standard for enthusiasm, family participation and old-fashioned fun. This year, all four Briggs sons, professional captains of

vessels around the country, were on board with their own families-about four people for each bunk! Tom Colvin had four vessels, including Kathryn B (LOA 105&#39;), a three-masted passenger schooner which sails in Maine in the summer and joined the race festivities on her way to winter in the Caribbean. Eleven schooners were built before 1938, and seven were built in the last eight years, covering 100 years of A. J. Meerwald foots it fleetly on a port tack under the rig she was born with. (Photo: Thad Koza) schooner design and history. The award ceremony and party on Saturday afternoon included local oys- one end of the bay to the other, it will be a ters and whole pigs roasting on portable magnificent sight. 1grills. Prizes were donated by local companies and a very good time was had by all. The proceeds from entry fees and dona- Alix Thorne sailed up from Maine to Baltitions go to promote &quot;public awareness of more in Victory Chimes, sailed the race on the Chesapeake Bay&#39;s maritime heritage Lettie G . Howard, and, being President of and to encourage the preservation and im- the Harvey Gamage Foundation, was rooting provement of the Chesapeake&#39;s natural re- the while far the Gamage. sources.&quot; This year, the Chesapeake Bay Foundation was the beneficiary of over Kathy Hill, Great Chesapeake Bay Schooner $7,500, as well as an enormous amount of Race, PO Box 8155, Norfolk VA 23503; publicity and goodwill. This year&#39;s race is 757 480-RACE; web site: www.Southern scheduled for 18-22 October 2000. From Branch. com/SchoonerRace

The rakish Pride of Baltimore II holds her own in her home waters ofthe Chesapeake, though she is equally comfortable traveling the world, including voyages to Europe, most recently in 1996, and Asia in 1998. (Photo: Thad Koza)