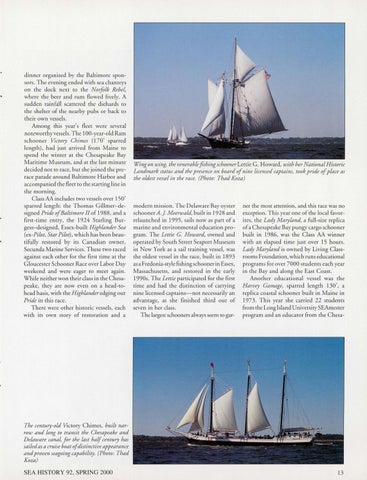 dinner organized by the Baltimore sponsors. The evening ended with sea chanteys on the dock next to the Norfolk Rebel, where the beer and rum flowed freely. A sudden rainfall scattered the diehards to the shelter of the nearby pubs or back to their own vessels. Among this year&#39;s fleet were several noteworthy vessels. The 100-year-old Ram schooner Victory Chimes (l 70&#39; sparred length) , had just arrived from Maine to spend the winter at the Chesapeake Bay Maritime Museum, and at the last minute decided not to race, but she joined the prerace parade around Baltimore Harbor and accompanied the fleet to the starring line in the morning. Class AA includes two vessels over 150&#39; sparred length: the Thomas Gillmer-designed Pride ofBaltimore II of 1988, and a first-time entry, the 1924 Starling Burgess-designed, Essex-built Highlander Sea (ex-Pilot, Star Pilot) , which has been beautifully restored by its Canadian owner, Secunda Marine Services. These two raced against each other for the first rime at the G loucester Schooner Race over Labor Day weekend and were eager to m eet again. While neither won their class in the Chesapeake, they are now even on a head-tohead basis, with the Highlander edging out Pride in this race. There were other historic vessels, each with its own story of restoration and a

Wing on wing, the venerable fishing schooner Lettie G. Howard, with her National Historic Landmark status and the presence on board ofnine Licensed captains, took pride ofplace as the oldest vessel in the race. (Photo: Thad Koza)

modern mission. The Delaware Bay oyster schooner A.}. Meerwald, built in 1928 and relaunched in 199 5, sails now as part of a marine and environmental education program. The Lettie G. Howard, owned and operated by South Street Seaport Museum in New York as a sail training vessel, was the oldest vessel in the race, built in 1893 as a Fredonia-srylefishingschooner in Essex, Massachusetts, and restored in the early 1990s. The Lettie participated for the first time and had the distinction of carrying nine licensed captains-not necessarily an advantage, as she finished third out of seven in her class. The largest schooners always seem to gar-

ner the most attention, and this race was no exception. This year one of the local favorites, the Lady Maryland, a full-size replica of a Chesapeake Bay pungy cargo schooner built in 1986, was the Class AA winner with an elapsed time just over 15 hours. Lady Maryland is owned by Living Classrooms Foundation, which runs educational programs for over 7000 students each year in the Bay and along the East Coast. Another educational vessel was the Harvey Gamage, sparred length 130&#39;, a replica coastal schooner built in Maine in 1973. This year she carried 22 students from the Long Island University SEAmesrer program and an educator from the Chesa-

The century-old Victory Chimes, built narrow and Long to transit the Chesapeake and Delaware canal, for the Last half century has sailed as a cruise boat ofdistinctive appearance and proven seagoing capability. (Photo: Thad Koza) SEA HISTORY 92, SPRING 2000