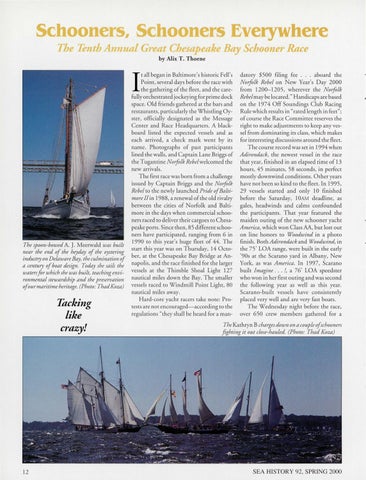 t all began in Baltimore&#39;s historic Fell&#39; s Point, several days before the race with the gathering of the fleet, and the carefully orchestrated jockeying for prime dock space. Old friends gathered at the bars and restaurants, particularly the Whistling O yster, officially designated as the Message Center and Race H eadquarters. A blackboard listed the expected vessels and as each arrived , a check mark went by its name. Photographs of pas t participants lined the walls, and Captain Lane Briggs of the T ugantine Norfolk Rebel welcomed the new arrivals. The first race was born from a challenge issued by Cap tain Briggs and the Norfolk Rebel to the newly launched Pride ofBaltimore !Jin 1988, a renewal of the old rivalry between the cities of Norfolk and Baltimore in the days when commercial schooners raced to deliver their cargoes to C hesapeake ports. Since then, 85 different schooners have participated, ranging from 6 in 1990 to this year&#39;s huge fleet of 44. T he The spoon-bowed A. J. Meerwald was built start this year was on Thursday, 14 Octonear the end of the heyday of the oystering industry on Delaware Bay, the culmination of ber, at the C hesapeake Bay Bridge at Ana century of boat design. Today she sails the napolis, and the race fini shed for the larger waters for which she was built, teaching envi- vessels at the Thimble Shoal Light 127 ronmental stewardship and the preservation nautical miles down the Bay. The smaller ofour maritime heritage. (Photo: Thad Koza) vessels raced to Windmill Point Light, 80 nautical m iles away. H ard-core yacht racers take note: Protests are not encouraged-acco rding to the regulations &quot;they shall be heard for a man-

Norfolk Rebel on New Year&#39;s Day 2000 from 1200-1205 , wherever the Norfolk Rebel may be located.&quot; Handicaps are based on the 1974 Off Soundings Club Racing Rule which results in &quot;rated length in feet&quot;; of course the Race Committee reserves the right to make adjustments to keep any vessel from dominating its class, which makes for interes ting discussions around the fleet. The course reco rd was set in 1994 when Adirondack, the newest vessel in the race that year, finished in an elapsed time of 13 hours, 45 minutes, 58 seconds, in perfect mostly downwind conditions. Other years have not been so kind to the fleet. In 199 5, 29 vessels started and only 10 finished before the Saturday, 1OAM deadline, as gales, headwinds and calms confounded the participants. That year featured the maiden outing of the new schooner yacht America, which won Class AA, but los t out on line honors to Woodwind in a photo fini sh. Both Adirondack and Woodwind, in the 75&#39; LOA range, were built in the early &#39;90s at the Scarano yard in Albany, New York, as was America. In 1997, Scarano built Imagine . .. !, a 76&#39; LOA speedster who won in her first outing and was seco nd the following year as well as this year. Scarano-built vessels have co nsisten tly placed very well and are very fast boats. The Wednesday night before the race, over 650 crew members gathered for a

The Kathryn B charges down on a couple ofschooners fighting it out close-hauled. (Photo: Thad Koza)