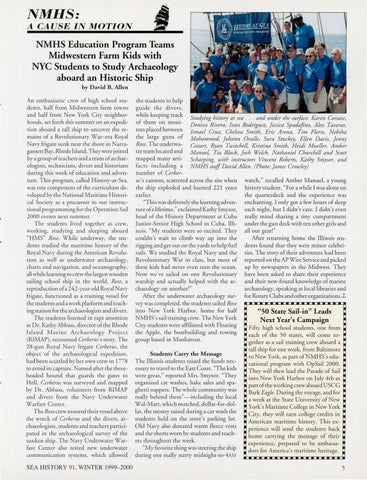 NMHS Education Program Teams Midwestern Farm Kids with NYC Students to Study Archaeology aboard an Historic Ship by David B. Allen An enthusiastic crew of high school students, half from Midwestern farm towns and half from New York City neighborhoods, set forth this summer on an expedition aboard a tall ship to uncover the remains of a Revolutionary War-era Royal Navy frigate sunk near the shore in Narragansett Bay, Rhode Island. They were joined by a group of teachers and a team of archaeologists, technicians, divers and histo rians during this week of education and adventure. T his program, called History-at-Sea, was one component of the curriculum developed by the National Maritime Historical Society as a precursor to our instructional programming for the Operation Sail 2000 events next summer. The students lived together as crew, working, studying and sleeping aboard &quot;HMS &quot; Rose. While underway, the students studied the maritime history of the Royal Navy during the American Revo lution as well as underwater archaeology, charts and navigation, and oceanography, all while learning to crew the largest wooden sailing school ship in the world. Rose, a reproduction of a 242-year-old Royal Navy frigate, functioned as a training vessel for the students and a work platform and teaching station for the archaeologists and divers. The students listened in rapt attention as Dr. Kathy Abbass, director of the Rhode Isl and Marine Archaeology Project (RIMAP), recounted Cerberus&#39;s story. The 28-gun Royal Navy frigate Cerberus, the object of the archaeological expedition, had been scuttled by her own crew in 1778 to avoid its capture. Named afrer the threeheaded hound that guards the gates to Hell, Cerberus was surveyed and mapped by Dr. Abbass, volunteers from RIMAP and divers from the Navy Underwater Warfare Center. The Rose crew moored their vessel above the wreck of Cerberus and the divers, archaeologists, students and teachers participated in the archaeological survey of the sunken ship. The Navy Underwater Warfare Center also tested new underwater communication systems, which allowed

the students to help guide the divers , while keeping track Studying history at sea . .. and under the surface: Karen Corsaw, of them on moniDenisse Rivera, Ivan Rodriguez, Jessica Spadafino, Alex Taveras, tors placed between Ismael Cruz, Chelsea Smith, Eric Arena, Tim Flores, Nebiha the large guns of Mohammed, Johann Ovalle, Sara Stuckey, Ellen Davis, Jenny Rose. The underwa- Cozart, Ryan Twitchell, Kristina Smith, Heidi Mueller, Amber ter team located and Manuel, Tia Black, josh Welch, Nathaniel Churchill and Scott mapped many arti- Scharping, with instructors Vincent Roberts, Kathy Smysor, and facts including a NMHS staff David Allen. {Photo: James Crowley) number of Cerberus&#39;s cannon, scattered across the site when watch, &quot; recalled Amber Manuel, a young the ship exploded and burned 221 years history student. &quot;For a while I was alone on the quarterdeck and the experience was earlier. &quot;This was definitely the learning adven- enchanting. I only got a few hours of sleep ture ofa lifetime,&quot; exclaimed Kathy Smysor, each night, but I didn&#39;t care. I didn&#39;t even head of the History D epartment at C uba really mind sharing a tiny compartment Junior-Senior High School in Cuba, Illi- under the gun deck with ten other girls and nois. &quot;My students were so excited. They all our gear!&quot; After returning home the Illinois stuco uldn&#39;t wait to climb way up into the rigging and get out on the yards to help furl dents found that they were minor celebrisails. We studied the Royal Navy and the ties. The story of their adventure had been Revolutionary War in class, but most of reported on the AP Wire Service and picked these kids had never even seen the ocean. up by newspapers in the Midwest. They Now we&#39;ve sailed on one Revolutionary have been asked to share their experience warship and actually helped with the ar- and their new-found knowledge of marine archaeology, speaking at local libraries and chaeology on another!&quot; After the underwater archaeology sur- for Rotary C lubs and other organizations.-t vey was completed, the students sailed Rose into New York Harbor, home for half &quot;50 State Sail-in&quot; Leads NMHS&#39; s sail training crew. The New York 11 Next Year&#39;s Campaign City students were affiliated with Floating Fifty high school students, one from the Apple, the boatbuilding and row111g 11 each of the 50 states, will come togro up based in Manhattan. : gether as a sail training crew aboard a I tall ship for one week, from Baltimore Students Carry the Message : to New York, as part ofNMHS &#39;s eduThe Illinois students raised the funds nec11 cational program with OpSail 2000. 1 essary to travel to the East Coast. &quot;The kids I They will then lead the Parade of Sail I were great,&quot; reported Mrs. Smysor. &quot;They : into New York Harbor on July 4th as : organized car washes, bake sales and spaII part of the working crew aboard USCG II ghetti suppers. The whole community was I Bark Eagle. During the voyage, and for : really behind them&quot;-including the local a week at the State University of New I Wal-Mart, which matched, dollar-for-dolYork&#39;s Maritime College in New York lar, the money raised during a car wash the City, they will earn college credits in students held on the store&#39;s parki ng lot. American maritime history. This exOld Navy also donated warm fleece ves ts perience will send the students back and the shorts worn by students and teachhome carrying the message of their I ers throughout the week. experience, prepared to be ambassa&quot;My favorite thing was steering the ship dors for America&#39;s maritime heritage. during one really starry midnight-to-4AM