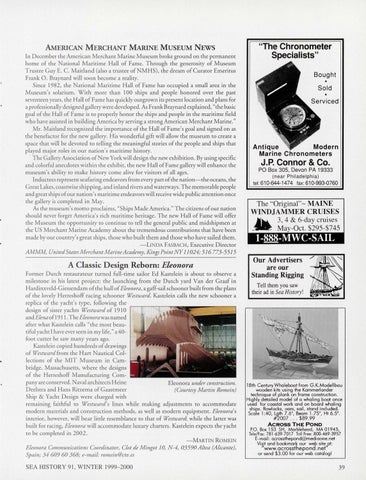 AMERICAN MERCHANT MARINE M USEUM N EWS In December the American Merchant Marine Museum broke gro und on the permanent home of the National Maritime Hall of Fame. T hro ugh the generosity of M useum Trustee Guy E. C. Maitland (also a trustee ofNMHS), the dream of C uraror Emeritus Frank 0. Braynard will soon become a reality. Since 1982, the National Maritime Hall of Fame has occupied a small area in the Museum's solarium. With more than 100 ships and people honored over the pas t seventeen years, the Hall of Fame has quickly outgrown its present location and plans fo r a professionally designed gallery were developed. As Frank Braynard explained, "the basic goal of the Hall of Fame is to properly honor the ships and people in the maritime field who have assisted in building America by serving a strong American Merchan t M arine." Mr. Maitland recognized the importance of the Hall of Fame's goal and signed on as the benefactor for the new gallery. His wonderful gift will allow the m useum to create a space that will be devoted to telling the meaningful stories of the people and ships that played major roles in our nation 's maritime history. The Gallery Association ofN ew York will design the new exhibition . By using specific and colorful anecdotes within the exhibit, the new Hall of Fame gallery will enhance the museum's ability to make hisrory come alive for visitors of all ages . Inductees represent seafaring endeavors from every part of the nation- the oceans, th e Great Lakes, coastwise shipping, and inland rivers and waterways. T he memorable people and great ships of our nation's maritime endeavors will receive wide public attention once the gallery is completed in May. As the museum's motto proclaims, "Ships Made America." T he citizens of our nation should never forget America's rich maritime heritage. T he new Hall of Fame will offer the Museum the opportunity to continue to tell the general public and midshipmen at the US Merchant Marine Academy abo ut the tremendous contri butions that have been made by our country's great ships, those who built th em and those who have sailed them. -LINDA FASBACH, Executive Director AMMM, UnitedStatesMerchantMarineAcademy, Kings Point NY 11024; 5 16773-5515

A Classic Design Reborn: Eleonora Former Dutch restaurateur turned full-time sailor Ed Kastelein is about to observe a milesrone in his latest project: the launching fro m the D utch yard Van de r Graaf in Hardinxveld-Giessendam of the hull of Eleonora, a gaff-sail sch ooner built fro m the plans of the lovely Herreshoff racing schoo ner Westward. Kastelein calls the new schooner a replica of the yacht's type, following the design of sister yachts Westward of 1910 and Elena ofl 911. TheEleonorawas named after what Kastelein calls "the most beautiful yacht I have ever seen in my life," a40foot cutter he saw many years ago . Kastelein copied hundreds of drawings of Westward from the Hart Nautical Collections of the MIT Museum in Cambridge, Massachusetts, where the designs of the Herreshoff Manufacturing Companyare conserved.Naval architects Heine Eleo nora under construction. Deelstra and Hans Ritzema of Gaastmeer (Courtesy Martin Romein) Ship & Yacht Design were charged with remaining faithful to Westward's lines wh ile making adjustments to accom modate modern materials and construction methods, as well as modern equi pment. Eleonora's interior, however, will bear little resemblance to that of Westward; while the latter was built for racing, Eleonora will accommodate luxury charters. Kastelein expects the yacht to be completed in 2002. - MARTIN R OMEIN Eleonora Communications Coordinator, Clot de Mingot 10, N-4, 03590 Altea (Alicante), Spain; 34 609 60 368; e-mail: romein@ctv.es

1-888-MWC-SAIL Our Advertisers are our Standing Rigging Tell them you saw their ad in Sea History!