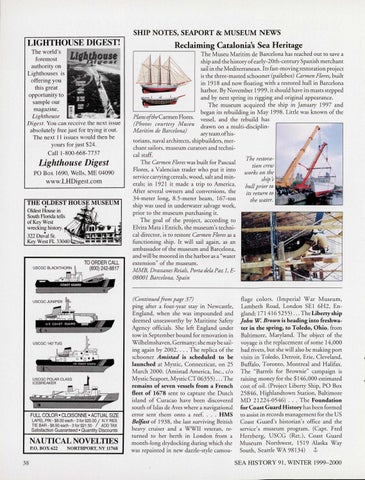 SHIP NOTES, SEAPORT &amp; MUSEUM NEWS The world &#39;s foremost authority on Lighthouses is offeri ng you thi s great opportunity to sample our magazine, lighthouse Digest. You can receive the next issue absolutely free j ust for trying it out. The next 11 issues would then be yours for j ust $24. Call 1-800-668-7737

T he M useu Maritim de Barcelona has reached out to save a ship and the history of early-20th-century Spanish merchant sail in the Mediterranean. Its fast- moving restoration proj ect is the three-masted schooner (pailebot) Carmen Flores, built in 1918 and now floating with a restored hull in Barcelona harbor. By November 1999, it should have its masts stepped and by next spring its rigging and original appearance. The museum acquired the ship in January 1997 and began its reb uilding in May 1998. Little was known of the P/,ans ofthe Carmen Flores. vessel, and the rebuild h as (Photos courtesy Museu drawn on a multi-disciplinMaritim de Barcelona) ary team ofhistorians, naval architects, shipbuilders, merchant sailors, museum curators and technical staff. The restoraThe Carmen Flores was built for Pascual tion crew Flores, a Valencian trader who put it into works on the service carrying cereals, wood, salt and minship&#39;s ~ . erals; in 1921 it made a trip to America. hull prior to After several owners and conversions, the its return to 34-meter long, 8.5-meter beam, 167-ton the water. ship was used in underwater salvage work, prior to the museum purchasing it. The goal of the project, according to Elvira Mata i Enrich, the museum&#39;s technical director, is to restore Carmen Flores as a functioning ship. It will sail again, as an ambassador of the museum and Barcelona, and will be moored in the harbor as a &quot;water extension&quot; of the museum. MME, Drassanes Reials, Porta de/a Paz 1, E08001 Barcelona, Spain

(Continued from page 37) ping after a four-year stay in Newcastle, England, when she was impounded and deemed unseaworthy by Maritime Safety Agency officials. She left England under tow in September bound for renovation in Wilhelmshaven, Germany; she may be sailing again by 2002 .... The replica of the schooner Amistad is scheduled to be launched at Mystic, Connecticut, on 25 March 2000. (Amistad America, Inc., c/o Mystic Seaport, MysticCT06355) .. . The remains of seven vessels from a French fleet of 1678 sent to capture the Dutch island of Curacao have been discovered south oflslas de Aves where a navigational error sent them onto a reef. . . . HMS Belfast of 1938, the last surviving British heavy cruiser and a WWII veteran, returned to her berth in London from a month-long drydocking during which she was repainted in new dazzle-style camou-