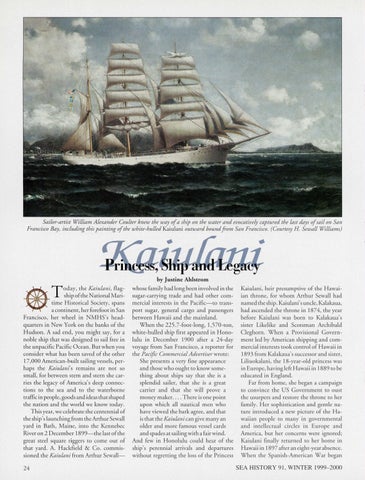 oday, the Kaiulani, flagship of the National Maritime Historical Society, spans a continent, her forefoo t in San Francisco, her wheel in NMHS&#39;s headquarters in New York on the banks of the Hudson. A sad end, you might say, for a noble ship thar was designed to sail free in the unpacific Pacific Ocean. But when you consider whar has been saved of the orher 17,000 American-built sailing vessels, perhaps rhe Kaiulani&#39;s remains are not so small, for between stem and stern she carries the legacy of America&#39;s deep connections to the sea and to the waterborne traffic in people, goods and ideas that shaped the nation and rhe world we know today. This yea r, we celebrate the centennial of the ship&#39;s launching from rheArrhur Sewall yard in Bath, Maine, into the Kennebec River on 2 December 1899-the las t of the great steel square riggers to come out of that yard. A. H ackfield &amp; Co. commissioned the Kaiulani from Arthur Sewall24

whose family had long been involved in the sugar-carrying trade and had other commercial interests in rhe Pacific-to transport sugar, general cargo and passengers between H awaii and the mainland. When the 225.7-foor-long, 1,570-ton, white-hulled ship first appeared in Honolulu in December 1900 after a 24-day voyage from San Francisco, a reporter for rhe Pacific Commercial Advertiser wro te: She presents a very fine appearance and rhose who oughr to know something about ships say rhar she is a splendid sailer, rhar she is a great carrier and rhar she will prove a money maker. ... There is one point upon which all nautical men who have viewed rhe bark agree, and rhar is rhar rhe Kaiulani can give many an older and more famous vessel cards and spades ar sailing with a fair wind. And few in Honolulu co uld hear of rhe ship&#39;s perennial arrivals and departures wirhour regrerring rhe loss of rhe Princess

Kaiulani, heir presumptive of rhe Hawaiian throne, for whom Arthur Sewall had named rhe ship. Kai ulani&#39;s uncle, Kalakaua, had ascended rhe throne in 187 4, rhe year before Kai ulani was born to Kalakaua&#39;s sister Likelike and Scotsman Archibald Cleghorn . W hen a Provisional Government led by American shipping and commercial interests took control of Hawaii in 1893 from Kalakaua&#39;s successor and sisrer, Liliuokalani, rhe 18-year-old princess was in Europe, having left H awaii in 1889 to be educated in England. Far from home, she began a campaign to convince rhe US Government to ousr rhe usurpers and restore rhe throne to her family. Her sophisricarion and genrle nature inrroduced a new picture of rhe Hawaiian people to many in governmental and intellectual circles in Europe and America, bur her concerns were ignored; Kaiulani finally returned to her home in Hawaii in 1897 after an eigh r-year absence. W hen rhe Spanish-American War began