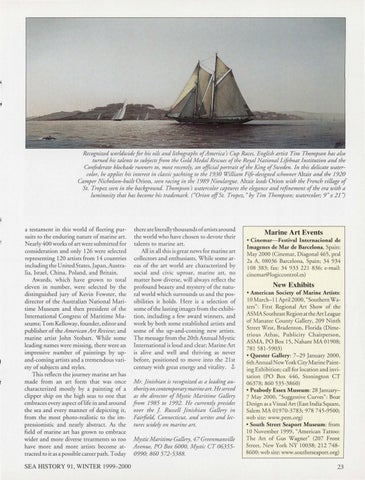 Recognized worldwide for his oils and lithographs ofAmericas Cup Races, English artist Tim Thompson has also turned his talents to subjects from the Gold Medal Rescues ofthe Royal National Lifeboat Institution and the Confederate blockade runners to, most recently, an official portrait ofthe King of Sweden. In this delicate watercolor, he applies his interest in classic yachting to the 1930 William Fife-designed schooner Altair and the 1920 Camper Nicholson-built Orion, seen racing in the 1989 Nioulargue. Altair leads Orion with the French village of St. Tropez seen in the background. Thompsons watercolor captures the elegance and refinement ofthe era with a luminosity that has become his trademark. (&quot;Orion offSt. Tropez,&quot; by Tim Thompson; watercolor; 9&quot; x 21 &#39;&#39;.)

a testament in this world of fleeting pursui ts to the enduring nature of marine art. Nearly 400 works of art were submitted for consideration and only 126 were selected representing 120 artists from 14 countries including rhe United States,Japan,Australia, Israel, C h ina, Poland, and Britain. Awards, which have grown to total eleven in number, were selected by the distinguished jury of Kevin Fewster, the director of th e Australian National Maritime Museum and then president of the International Congress of Maritime Museums; Tom Kellaway, founder, editor and publisher of the American Art Review; and marine artist John Stobart. While some leading names were missing, there were an impressive number of paintings by upand-coming artists and a tremendous variery of subjects and sryles. This reflects the journey marine art has made from an art form that was once characterized mostly by a painting of a clipper ship on the high seas to one that embraces every aspect oflife in and around the sea and every manner of depicting it, from rhe most photo-realistic to rhe impressionistic and nearly abstract. As the field of marine art has grown to embrace wider and more diverse treatments so too have more and more artists become attracted to it as a possible career path. Today

there are literally thousands of artists around the world who have chosen to devote their talents to marine art. All in all this is great news for marine art collectors and enthusiasts. While some areas of the art world are characterized by social and civic uproar, marine art, no matter how diverse, will always reflect the profound beaury and mystery of the natural world which surrounds us and the possibilities it holds. Here is a selection of some of the lasting images from the exhibition, including a few award winners, and work by both some established artists and some of the up-and-coming new artists . The message from the 20th Annual M ysric International is loud and clear; Marine Arr is alive and well and thriving as never before, posi rioned to move into the 21st century with great energy and viraliry. 1. Mr. jinishian is recognized as a leading authority on contemporary marine art. He served as the director of Mystic Maritime Gallery from 1985 to 1992. He currently presides over the ]. Russell jinishian Gallery in Fairfield, Connecticut, and writes and lectures widely on marine art. Mystic Maritime Gallery, 47 Greenmanville Avenue, PO Box 6000, Mystic CT 063550990; 860 572-5388.