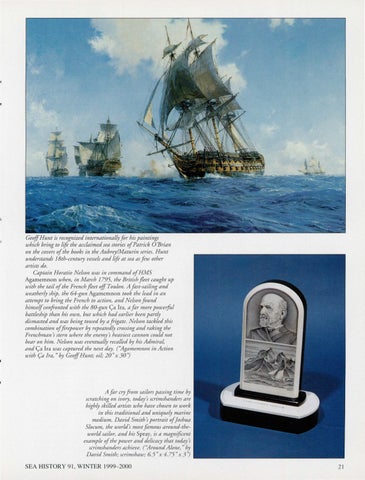 GeoffH unt is recognized internationally for his paintings which bring to life the acclaimed sea stories ofPatrick O'Brian on the covers ofthe books in the Aubrey!Maturin series. Hunt understands 18th-century vessels and life at sea as Jew other artists do. Captain Horatio Nelson was in command ofHMS Agamemnon when, in March 1795, the British fleet caught up with the tail ofthe French fleet off Toulon. A fast-sailing and weatherly ship, the 64-gun Agamemnon took the lead in an attempt to bring the French to action, and Nelson found himself confronted with the 80-gun \:a Ira, a Jar more powerfal battleship than his own, but which had earlier been partly dismasted and was being towed by a frigate. Nelson tackled this combination offirepower by repeatedly crossing and raking the Frenchman s stern where the enemys heaviest cannon could not bear on him. Nelson was eventually recatled by his Admiral and <;a Ira was captured the next day. (''Agamemnon in Action with <;a Ira," by Geoff Hunt; oil; 20" x 30")

A for cry from sailors passing time by scratching on ivory, todays scrimshanders are highly skilled artists who have chosen to work in this traditional and uniquely marine medium. David Smiths portrait ofJoshua Slocum, the worlds most famous around-theworld sailor, and his Spray, is a magnificent example ofthe power and delicacy that todays scrimshanders achieve. (''Around Alone, " by David Smith; scrimshaw; 65" x 4. 75 " x 3 ')