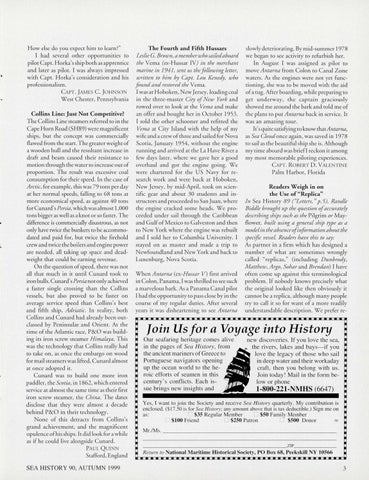 How else do yo u expect him to learn?&quot; I had several other opportunities to pilot Capt. Horka&#39; s ship both as apprentice and later as pilot. I was always impressed with Capt. Horka &#39;s consideration an d his professionalism. CAPT. ]AMES C. J OHNSON West Chester, Pennsylvania

Collins Line: Just Not Competitive? The Collins Line steamers referred to in the Cape Horn Road (SH89) were magnificent ships, but the concept was commercially flawed from the start. The greater weight of a wooden hull and the resultant increase in draft and beam caused their resistance to motion through the water to increase out of proportion . T he result was excessive coal consumption for their speed. In rhe case of Arctic, for example, this was 79 tons per day at her normal speeds, fal ling to 68 tons at more economical speed, as against 40 tons for C unard&#39; sPersia, which was almost 1,000 tons bigge r as well as a knor or so faster. The difference is commercially disastrous, as not only have twice the bunkers to be accommodated and paid for, but twice the firehold crew and twice the boilers and engine power are needed, all taking up space and deadweight rhar could be earning revenue. On rhe question of speed, there was nor all rhar much in ir until Cunard took to iron hulls. C unard&#39; sPersia noronlyachieved a faster single crossing rhan rhe Collins vessels, bur also proved to be faster on average service speed than Collins&#39;s besr and fifth ship, Adriatic. In reali ry, both C ollins and Cunard had already been outclassed by Peninsular and Orient. Ar the time of rhe Atlantic race, P&amp;O was building its iron screw steamer H imalaya. This was the technology rhar Collins really had to rake on, as once rhe embargo on wood for mail steamers was lifted, C unard almost ar once adopted it. C unard was to build one more iron paddler, rhe Scotia, in 1862, which enrered service ar almost rhe same rime as thei r first iron screw steamer, rhe China. The dares disclose rhar rhey were almost a decade behind P&amp;O in their technology. None of this derracrs from Collins&#39;s grand achievement, and rhe magnificenr opulence of his ships. Ir did look for a while as if he could live alongside C unard. PAUL QUI NN

The Fourth and Fifth Hussars Leslie G. Brown, a member who sailed aboard the Verna (ex- Hussar IV) in the merchant marine in 194 1, sent us the Joffowing Letter, written to him by Capt. Lou Kenedy, who found and restored the Verna. I was ar Hoboken, New Jersey, loading coal in rhe three-master City ofNew Yo rk and rowed over to look ar rh e Vema and make an offer and bought her in O ctober 1953. I sold rhe other schooner and refirred rhe Vema ar C iry Island wirh rhe help of my wife and a crew of three and sail ed for Nova Scotia, January 1954, without th e engine running and arrived at the La H ave River a few days later, where we gave her a good overhaul and got the engine go ing. We were chartered for the US Navy for research work and were back at Hoboken, New Jersey, by mid-April, took on scientific gear and about 30 srudents and instructors and proceeded to San Juan, where the engine cracked som e heads. W e proceeded under sail through the Caribbean and Gulf of Mexico to Galves ton and then to New York where the engine was rebuilt and I sold her to Columbia Universiry. I stayed on as m as ter and made a trip to Newfo undland and New York and back to Lunenburg, Nova Scotia. When Antarna (ex-H ussar V) first arrived in C olon, Panama, I was thrilled to see such a marvelous bark. As a Pan ama Canal pilot I had the opportuniry to pass close by in the course of m y regular duties. After several years it was disheartening to see Antarna

slowly deteriorating. By mid-summ er 1978 we began to see acriviry to refurbish her. In August I was assigned as pilot to move Antarna from Colon to Canal Zone waters. As rhe engines were not yet fun ctioning, she was to be moved with the aid of a tug. After boarding, wh ile preparing to ge t underway, the captain graciously showed m e around the bark and told me of the plans to putAntarna back in service. It was an amazing tour. Ir&#39;s quite satisfying to know thatAntarna, as Sea Cloud once again, was saved in 1978 to sail as the beautiful ship she is. Although my time aboard was brief! reckon it among my most memorable piloting experiences. CAPT. R OBERT D . VALENTINE Palm H arbor, Florida

Readers Weigh in on the Use of &quot;Replica&quot; I n Sea Histo ry 89 (&quot;Letters,&quot; p.5), Randle Biddle brought up the question ofaccuratdy describing ships such as the Pilgrim or Mayflower, built using a general ship type as a model in the absence ofinfarmation about the specific vessel. Readers have this to say: As partner in a firm which has designed a number of what are som etimes wrongly called &quot; replicas,&quot; (including D unbrody, Matthew, Argo, Sohar and Brendan) I have often come up against this terminological problem. If nobody knows precisely what the original looked like then obviously it cannot be a replica, although many people try to call it so for want of a more readily understandabl e descri ption . We prefer re-

Join Us for a Voyage into History Our seafaring heritage comes alive in the pages of Sea History, from the ancient mariners of Greece to Portuguese navigators opening up the ocean world to the heroic efforts of seamen in this century&#39;s conflicts. Each issue brings new insights and

new discoveries. If you love the sea, the rivers, lakes and bays -if you love the legacy of those who sail in deep water and their workaday craft, then you belong with us. Join today! Mail in the form below or phone

9 THE CAPE HORN ROAD, XX. The Voyage Is Toward Freedom, by Peter Stanford • 14 The Prize Game, by Donald A. Petrie • 18 THE TALL SHIPS OF OPERATION SAIL 2000: The Sail Training Ship Danmark, by Suzanne McMurray Ko and Capt. O. P. Nielsen • 20 "A Roving Band of Riggers and Shipwrights" Refits the Balclutha and Moves on, by Steven A. Hyman • 24 Writer, Painter, Seafarer: The John J. Bertonccini Collection, by David Hull • 29 Grandfather and the Mystery Ship, by Karl F Stephens, MD • 32 MODELMAKERS' CORNER. Down to the Sea in Shoe Boxes: The Art of Naval Miniatures, by Peter Sorensen • 36 The Ships of the San Francisco Gold Rush, by Shelley Reid • 38 Round the World and Home Again: The Picton Castle Returns to Nova Scotia, by Angelo Cerchione •