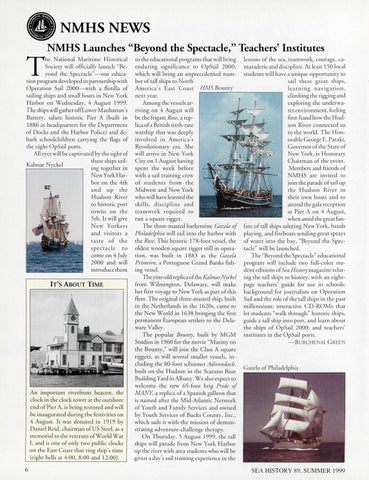 he National Maritime Historical Society will officially launch &quot;Beyo nd the Spectacle&quot;-our education program developed in partnership with Operation Sail 2000-wirh a flotilla of sailing ships and small boars in New York H arbor on Wednesday, 4 August 1999. The ships will gatheroffLower Manhattan&#39;s Battery, salute historic Pier A (built in 1886 as headquarters for the Department of Docks and the Harbor Police) and debark schoolchildren carrying the flags of the eight OpSail ports. Al l eyes wi ll be captivated by the sight of these ships sailKalmar Nyckel ing together in New York Harbor on the 4th and up the Hudson Rive r to hisro ric port rowns on the 5th. It will give New Yorkers and visitors a taste of the spectacle to come on 4 July 2000 and will introduce them

An important riverfront beaco n, the clock in the clock tower at the outshore end of Pier A, is being resto red and wi ll be inaugurated during the festivities on 4 August. Ir was donated in 1919 by Daniel Reid, chairman of US Steel, as a memorial to the veterans ofWorld War I, and is one of on ly two public clocks on th e East Coast that ring ship &#39;s time (eight bells at 4:00, 8:00 and 12: 00).

to the educational programs that will bring lessons of the sea, teamwork, courage, caenduring significance to OpSail 2000, maraderie and di scipl ine. At least 150 local which will bring an unprecedented num- studenrs will have a uniqu e opportunity to ber of tall ships to North sail these great ships, America &#39; s East Coas t HMS Bounty lear ning navigation, ....-------,--------, next year. climbing the rigging and Among the vessels arexploring the underwariving on 4 August will terenvironmenr, feeling be the fri gate Rose, a repfirst-hand how the Hudson River connected us lica of a British sixth-rate to the world. The Honwarship that was deeply involved in America&#39;s orable George E. Pataki, Revolutionary era . She Governor of the State of will arrive in New York New York, is Honorary Chairman of the event. City on 1 August having Members and friends of spent the week befo re with a sail training crew NMHS are invited to of students from th e join th e parade of sail up the Hudson River in Midwest and New York who will have learned the their own boats and to attend the gala reception ski ll s, discipline and teamwork required to at Pier A on 4 August, when amid the great fanrun a square ngger. The three-masted barkentine Gazela of fare of tall ships saluting New York, bands Philadelphia will sail into the harbor with playing, and fireboats sending great sprays the Rose. This historic 178-foot vessel, the of water inro the bay, &quot;Beyond the Specoldest wooden square rigger still in opera- tacle&quot; wi ll be launched. The &quot;Beyond the Spectacle&quot; educational tion, was built in 1883 as the Gazela Primeiro, a Portuguese Grand Banks fish- program will include two fu ll -color stuing vessel. dent editions of Sea History magazine relatThe year-old replica of the Kalmar Nyckel ing the tall ships to history, with an eighrfrom Wilmington, Delaware, will make page teachers&#39; guide for use in schools: her first voyage to New York as pan of this background for journalists on Operation fleet. The original three-masted ship, built Sail and the role of the tall ships in the past in the Netherlands in the 1620s, came to millennium; interactive CD-ROMs that the New World in 1638 bringing the first let students &quot;walk through&quot; historic ships, permanent European settlers to the Dela- guide a rail ship into port, and learn about ware Valley. the ships of OpSail 2000; and teach ers &#39; The popular Bounty, built by MGM institutes in the OpSail ports. Studios in 1960 for the movie &quot;Mutiny on -BURCH ENAL GREEN the Bounty,&quot; will join the Class A square riggers, as will several smaller vessels, including the 80-foot schooner Adirondack, Gazela of Philadelphia built on the Hudso n in the Scarano Boat Building Yard in Albany. We also expect to welcome the new 65-foot brig Pride of MANY, a replica of a Spanish galleon that is named after the Mid-Atlantic Network of Youth and Fami ly Services and owned by Youth Services of Bucks County, Inc., which sails it with the mission of demonstrating adventure-chall enge therapy. On Thursday, 5 August 1999, the tall ships will parade from New York H arbor up the river with area students who wi ll be given a day&#39;s sail training experience in the SEA HISTORY 89, SUMMER 1999