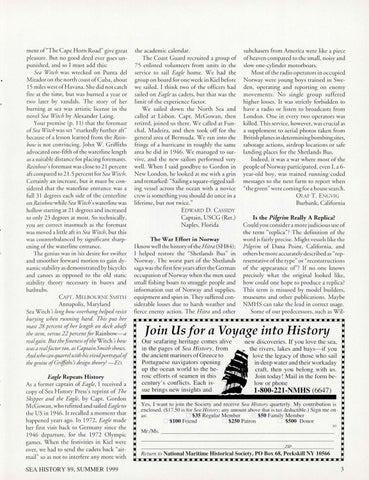 menr of"The Cape Horn Road" give great pleasure. But no good deed ever goes unpunished, and so I must ad d this: Sea Witch was w recked o n Puma de! Mirador on the north coast of C uba, abo ut 15 miles west of H ava na. She did not catch fire at the time, but was burned a year or two late r by vandals. The story of her burning at sea was artistic li ce nse in the novel Sea Witch by Alexander Laing. Your premise (p. 11 ) that the foremast of Sea Witch was set "markedly further aft" because of a lesso n learned from rhe Rainbow is not co nvi ncing. John W. Griffiths advocated one-fifth of the waterline length as a suitab le distance for placing foremasts. Rainbow's foremast was close to 2 1 percent aft compared to 21.5 percent for Sea Witch. Certai nly an in crease, but it must be considered that the wa terline entrance was a full 3 1 degrees each side of the centerline on Rainbow whil e Sea Witch's waterline was hollow starting at 2 1 degrees and increased to o nly 23 degrees at most. So technically, you are co rrect inasm uch as the foremast was moved a little aft in Sea Witch, but this was counterbalanced by significant sharpening of the waterline entrance. T he ge nius was in his desire for swifter and smoother forward morion to gain dynamic stability as demonstrated by bicycles and canoes as opposed to th e old static stabili ty theory necessary in buoys and bathtubs . CAPT. MELBOURNE SMITH Annapolis, Maryland Sea W itch s long bow overhang helped resist

burying when running hard. This put her mast 28 percent ofher length on deck abaft the stem, versus 22 percent for Rainbow-a real gain. But the fineness ofthe Witch s bow was a realfactor too, as Captain Smith shows. And who can quarrel with his vividportrayal of the genius ofGri/Jithss design theory?-ED. Eagle Repeats History As a former captain of Eagle, I received a copy of Sea History Press' s reprint of The Skipper and the Eagle, by Capt. Gordon McGowan, who refined and sailed Eagle to the US in 1946. It recalled a moment that happened years ago. In 1972, Eagle made her first visit back to Germany since the 1946 departure, for the 1972 Olympic games. When the festivities in Kiel we re over, we had to send the cadets back "airmail" so as not to interfere any more with SEA HISTORY 89 , SUMMER 1999

the academic calendar. The Coast Guard recruited a gro up of 75 enlisted volunteers from units in the service to sail Eagle home. We had the gro up on board for o ne week in Kiel before we sailed. I think two of the officers had sailed on Eagle as cadets, but that was the limit of the experience factor. We sailed down the North Sea and called at Lisbon. Capt. McGowan, th en retired, joined us there. We called at F unchal, Madeira, and then took off for the general area of Bermuda. We ran into th e fringe of a hurrica ne in roughly the same area he did in 1946. We managed to survive, and th e new sai lo rs performed very well. When I sa id goodbye to Go rdon in New London, he looked at m e with a grin and remarked: "Sailing a square-rigged sailing vessel across the ocean with a novice crew is so mething yo u should do once in a lifetime, bur nor twice. " EDWARD D. CASSIDY Captain , USCG (Ret. ) Napl es, Florida The War Effort in Norway I know well the historyofrheHitra(S H84); I helped restore the "Shetlands Bus" in Norway. The worst part of the Shetlands saga was the first few years after the German occupation of Norway when the men used small fishing boars to smuggle people and inform ation out of No1way and supplies, equipment and spies in . T hey suffered considerab le losses due to harsh weather and fierce enemy action. T he Hitra and other

subchasers from America were like a piece of heaven compared to the small, noisy and slow one-cylinder motorboats. Most of the radio operators in occupied No rway were yo ung boys trained in Sweden, operating and reportin g on enemy movements. No single group suffered higher losses. It was strictl y forb idden to have a radio or listen to broadcasts from London. One in every two o perato rs was killed. This service, howeve r, was crucial as a supplement to aerial photos taken from British planes in determining bombing sites, sabotage actions, aird rop locations or safe landing places for the Shetlands Bus. Indeed, it was a war where most of the people ofNorway parti cipated , even I, a 6year-old boy, was trained runnin g coded messages to the next farm to report when "rhe green" were com ing fora house search. OLAF T. ENGVIG Burbank, California

Is the Pilgrim Really A Replica? Could yo u consider a more judicious use of rhe term " repli ca"? The defi nitio n of the wo rd is fairly precise. Might vessels like rh e Pilgrim of D ana Po im, California, and others be more accurately described as " representative of rhe type" or " reconstructions of the appeara nce of'? If no one knows precisely what the original looked like, how co uld one hope to produce a replica? This term is misused by model builders, museum s and other publi cations. Maybe NM HS can rake th e lead in correct usage. Some of our predecessors, such as Wi l-

Join Us for a Voyage into History Our seafaring heritage comes alive in the pages of Sea History, from the ancient mariners of Greece to Portuguese navi gators opening up the ocean world to the heroic efforts of seamen in this century' s conflicts. Each issue brings new insights and

new di scoveries. If you love the sea, the rivers, lakes and bays-if you love the legacy of those who sail in deep water and their workaday craft, then you belong with us. Join today! Mail in the form below or phone