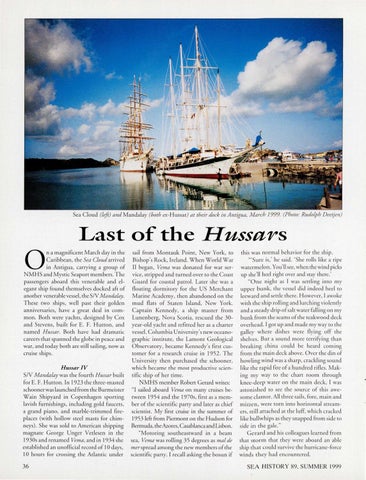 Sea Cloud (left) and Mandalay (both ex-Hussar) at their dock in Antigua, March 1999. (Photo: Rudolph Deetjen)

Last of the Hussars

n a magnificent March day in the Caribbean, the Sea Cloud arri ved in Antigua, carryin g a gro up of NM H S and Mys tic Seaport m embers. The passe ngers aboard this ve nerable and elegant ship fo und themselves docked aft of another ve nerable vessel, the S/V Mandalay. These two ships, well past their go lden anniversa ries, have a great deal in co mmon. Both we re yachts, des igned by C ox and Stevens, built for E. F. Hutton , and nam ed H ussar. Both have had dramatic careers that spann ed the globe in peace and wa r, and today both are still sailing, now as cruise ships.

Hussar IV S/V M andalay was the fourth Hussar built for E. F. Hutton. In 1923 the three- mas ted schooner was launched from the Burmeister W ain Shipya rd in Copenhage n sporting lavish furnishings, including go ld faucets, a grand piano, and m arble- rrimmed fireplaces (with hollow steel masts for chimneys). She was sold to Am erican shipping magnate Geo rge Unger Verlesen in the 1930s and renamed Verna, and in 1934 she establi shed an unofficial reco rd of 10 days, l 0 hours for crossing rhe Atlantic under

sail from Montauk Point, New York, to Bishop's Rock, Ireland. When World War II began, Verna was donated for war service, stripped and turned over to the Coast Guard for coastal patrol. Later she was a flo ating dormito ry for the US M erchant Marine Academy, then abandoned on the mud flats of Staten Island, New York. Captain Kennedy, a ship mas ter from Lunenberg, Nova Scotia, rescued rhe 30year-old yacht and refined her as a charter vessel. Columbi a U niversi ry' s new oceanogra phic insrirure, the Lamont Geological Observatory, became Kennedy's fi rst customer for a research cruise in 1952. The Universiry then purchased rhe schooner, whi ch beca me th e most producti ve scientific ship of her rime. NMHS member Robert Gerard writes: "I sailed aboard Verna on many cruises between 1954 and the 1970s, first as a member of rhe scientific parry and later as chief scientist. My first cruise in the swnmer of 1953 lefr from Piermont on the Hudson for Bermuda, the Azores, Casablanca and Lisbon. "Motoring southeastward in a beam sea, Verna was rolling 3 5 degrees as mal de mer spread among the new members of rhe scientific parry. I recal l asking the bosun if

this was normal behavio r for the ship. '"Sure is,' he said. 'She rolls like a ripe waterm elon. Yo u'll see, when the wi nd picks up she' ll heel right over and stay there.' "On e night as I was settling into my upper bunk, rhe vessel did indeed heel to leeward and senle there. However, I awo ke with the ship ro llin g and lurching violently and a stead y drip of salt wa ter falling on my bunk from the seams of the teakwood deck overh ead . I go t up and made my way to rhe gall ey where dishes were fl ying off th e shel ves. Bur a sou nd more terri fy ing than breaking china could be heard co ming from the main deck above. O ve r the din of howling wind was a sharp , crackling so und li ke rhe rapid fi re of a hundred rifles . Making my way to the chart room through knee-deep water on the main deck, I was astonished to see rhe source of this awesom e clamo r. Al l three sails, fore, m ain and mizzen , were torn into horizonta l strea mers, sti ll a ttached at the luff, which cracked li ke bullwhips as rhey snapped fro m side to side in rh e gale." Gera rd and his colleagues learn ed from that srorm rhar they were aboard an able ship th at cou ld survive rhe hurricane-fo rce winds they had enco untered .