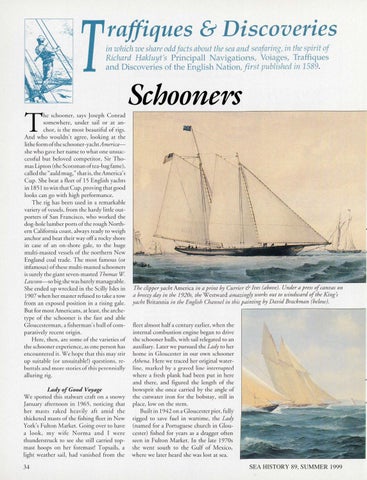 raffiques &amp; Discoveries in which we share odd facts about the sea a!ld seafaring, in the spirit of Richard Hakluyt&#39;s Principall Navigations, Voiages, Traffiques and Discoveries of the English Nation, first published in 1589.

Lady of Good Voyage We spa rred rhis stalwart crafr o n a snowy January afternoon in 1965, noticing rhat her m as ts raked heavily aft amid the thicketed masrs of rhe fishing fleet in New York&#39;s Fulton Market. Going over to have a look, m y w ife No rm a and I we re thunderstruck to see she srill carried topmast hoops on her foremast! Topsails, a light weather sail , had vanished from rhe

The clipper yacht Ame rica in a print by Currier &amp; Ives (above). Under a press ofcanvas on a breezy day in the 1920s, the Wesrward amazingly works out to windward ofthe King&#39;s yacht Britannia in the English Channel in this painting by David Brackman (below).

fleer almost half a centu ry earlier, when rhe internal combustion engine began to drive rhe schooner hulls, wirh sail relegared to an auxiliary. Later we pursued the Lady to her home in G lo ucester in our own schooner Athena. H ere we traced her original waterline, marked by a graved line inrerrupred where a fresh plank had been pur in here and rhere, and figured rhe lengrh of rhe bowsprit she once carried by rhe angle of rhe curwarer iron for rhe bobstay, still in place, low on the stem . Bui lr in 1942 on a G loucester pier, fully rigged to save fuel in wa rtime, rhe Lady (nam ed for a Portuguese church in Glouces ter) fished for years as a dragger ofren seen in Fulton Market. In rhe lare 1970s she went sourh to rhe Gulf of Mexico, where we larer heard she was losr ar sea.