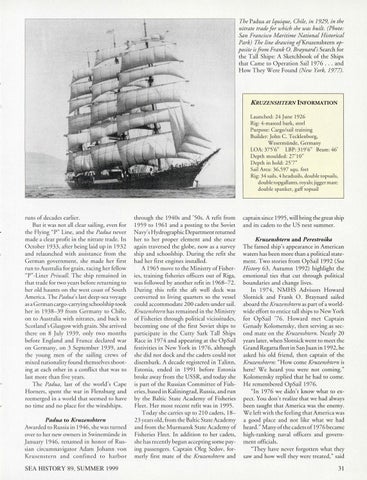 The Padua at l quique, Chile, in 1929, in the nitrate trade fo r which she was built. (Photo: San Francisco M aritime National Historical Park) The line drawing o/Kruzenshtern op posite is .from Frank 0. Braynard's Search for the Tall Ships: A Sketchbook of the Ships that Came to Operation Sail 1976 . .. and H ow They W ere Found (New York, 1977).

runs of decades earli er. Bu t it was not all clear sailing, even fo r the Flying "P" Line, and the Padua never made a clear profit in the nitrate trade. In October 1933, after being laid up in 1932 and relaunched with assistan ce from th e German government, she made her fi rst run to Australia fo r grain , racing her fellow "P"-Liner Priwall. T he ship remained in that trade fo r two yea rs befo re returnin g to her old hau nts on the wes t coast of So u th Ameri ca. T he Padua' s last deep-sea voyage as a Germ an cargo-carryingschoolship too k her in 1938-3 9 from Germany to C hil e, on to Australia with nitrates, and back to Scotland's G lasgow with grain . She arrived there on 8 July 1939, only two months befo re England and France declared wa r on Germany, on 3 Sep tember 1939, and the yo ung men of the sailing crews of mixed nationali ty fo und themselves shoo ting at each other in a conflict that was to las t mo re than five years. T he Padua, las t of the wo rld's Cap e H om ers, spent the war in Flensburg and reemerged in a wo rld that seem ed to have no tim e and no p lace fo r the windships.

Padua to Kruzenshtern Awa rded to Russia in 1946, she was turned over to her new owners in Swinemunde in January 1946, renamed in ho nor of Russian circumnavigator Adam Johan n vo n K ruse nstern and co nfin ed to h arb o r

thro ugh the 1940s and ' 50s. A refit from 1959 to 196 1 and a posting to the Soviet Navy's H ydrographic D epartment returned h er to her proper element and she once again traversed the globe, now as a survey ship and schoolship. During the refit sh e had her first engin es installed . A 1965 move to the M inistry of Fisheries, training fis heries officers out of Riga, was followed by ano ther refit in 1968-72. D urin g this refit th e aft well deck was converted to living quarters so the vessel co uld accommodate 200 cadets under sail. Kruzenshtern has remained in the Ministry of Fisheries thro ugh political vicissitudes, beco ming one of the first Soviet ships to participate in the C utty Sark Tall Ships Race in 1974 and appearing at the OpSail fes ti vities in New York in 1976, although she did not dock and the cadets could not disembark. A decade registered in Talinn, Esto nia, ended in 1991 before Estonia broke away fro m the US SR, and today she is part of the Russian Committee of Fisheries, based in Kaliningrad, Russia, and run by the Baltic State Academy of Fisheries Fleet. H er mos t recent refit was in 1995. T oday she carries up to 2 10 cadets, 1823 years old, fro m the Baltic State Academy and fro m the M urmansk State Academy of Fisheries Fl eet. In addition to her cadets, she has recently begun acce pting some paying passengers. Captain O leg Sedov, formerly first mate of the Kruzenshtern and

captain since 199 5, will bring the great ship and its cadets to the US next summer.

Kruzenshtern and Perestroika T he famed ship's appearan ce in American waters has been more than a political statement. T wo stories from O pSail 1992 (Sea History 63, Autumn 1992) highlight the emotional ties that cut through political boundaries and change lives. In 197 4, NMHS Advisors H oward Slotnick and Frank 0. Braynard sailed aboard the Kruzenshtern as part of a wo rldwide effo rt to entice tall ships to New Yo rk fo r OpSail '76 . H oward met Cap tain Genady Kolomensky, then serving as second mate on the Kruzenshtern. Nearly 20 years later, when Slotnick went to meet the G rand Regatta fleet in San] uan in 1992, he asked his old friend, then captain of the Kruzenshtern: "How come Kruzenshtern is here? We heard you were not coming." Kolomensky replied that he had to come. H e remembered OpSail 1976. "In 1976 we didn 't know what to expect. Yo u don't realize that we had always been taught that America was the enemy. W e left with the feeling that America was a good place and not like wh at we had heard. " M any of the cadets ofl9 76 became high -ranking naval offi cers and government offi cials. "They have never fo rgotten what they saw and how well they we re treated ," said