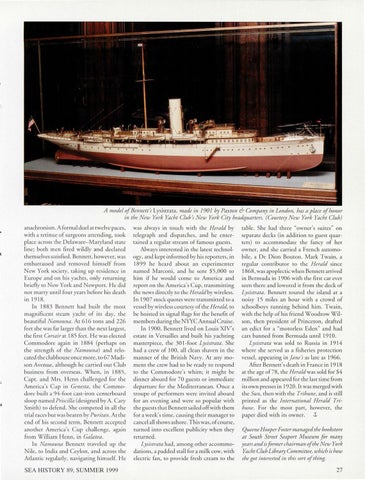 A model ofBennett's Lysistrata, made in 1901 by Paxton & Company in London, has a place ofhonor in the New York Yacht Club's New Yo rk City headquarters. (Courtesy New Yo rk Yacht Club) anachronism. A formal duel at twelve paces, with a retinue of surgeo ns atte nding, took place across the Delaware-Maryland stare line; bo th men fired wildly and decla red themselves satisfi ed. Bennett, however, was embarrassed and removed himself from New Yo rk society, raking up residence in Europe and o n his yachts, only returnin g brieAy to New York and Newport. H e did nor marry until four years before his death in 191 8. In 1883 Bennett had built the most m agnifi cent stea m yacht of its day, the beautiful Namouna. Ar 616 rans and 226 feet she was far larger th an the next largest, the first Corsair at 185 feet. H e was elected Co mmodore again in 1884 (perhaps on the strength of the Namouna) and relocated the clubhouse once more, to 67 Madison Avenue, although he ca rried out C lub business from overseas. W hen , in 1885, Capt. and Mrs. H enn challenged for the America's C up in Genesta, the Co mmodore built a 94-foot cast-iron centerboard sloop named Priscilla (des igned by A. Cary Sm ith) to defend. She co mpeted in all the trial races but was beaten by Puritan. At the end of his second term , Bennett accep ted ano ther America's C up challenge, aga in from Wi lliam H enn, in Galatea. In Namouna Bennett traveled up the Ni le, ro India and Ceylo n, and across th e Atlantic regularl y, navigating himself. He SEA HISTORY 89, SUMMER 1999

was always in touch w ith the H erald by telegraph and dispatches, and he entertain ed a regular stream of famous gues ts. Always interested in the lates t technology, and kept informed by his reporters, in 1899 he heard about an ex perim enter named Marconi, and he sent $5, 000 to him if he wo uld come to Ameri ca and report on the America's C up, rransm itting th e news directl y to th e H erald by w ireless. In 1907 stock quotes were transmitted to a vessel by wireless co urtesy of the H erald, to be hoisted in signal Aags for the benefit of members durin g the NYYCAnnual C ruise. In 1900, Bennett li ved o n Louis XIV's es tate in Versai lles and built his yachting masterpi ece, rhe 301-foot Lysistrata. She had a crew of 100, all clean shaven in the manner of the British Navy. Ar any moment the crew had to be ready to res pond to the Commodore's whim; it mi ght be dinner aboard for 70 guests or immediate departure for the Mediterranean. Once a troupe of perfo rmers we re invited aboard for an evening and we re so popul ar with the guests that Bennett sa il ed off with them for a week's rim e, caus ing their manage r to ca ncel all shows as hore. This was, of co urse, turned into excellent publicity when they returned. Lysistrata had, among other accommodations, a padded stall for a milk cow, with electric fan, to provide fresh cream to the

table. Sh e had three "owner's su ites" on separate decks (in addition to guest quarters) to acco mmodate the fancy of her owner, and she carried a French automobile, a D e Dion Bouton. Mark Twain , a regular contributor to the H erald since 1868, was apoplectic when Bennett arrived in Bermuda in 1906 with the first car ever seen there and lowered it from th e deck of Lysistrata. Bennett toured the island at a noisy 15 miles an hour with a crowd of schoolboys runnin g behind him. Twain , with the help of his fri end Woodrow Wilso n, then pres ident of Princeto n, drafted an edict for a "motorless Eden " and had cars banned from Bermuda until 1910 . Lysistrata was sold to Russ ia in 1914 where she served as a fi sheri es protection vessel, appearing in Jane's as late as 1966. After Bennett's death in France in 191 8 at the age of78, the H erald was so ld for $4 million and appeared for the last time from its own presses in 1920. Ir was merged w ith the Sun, then with the Tribune, and is still printed as the I nternational H erald Tribune. Fo r the most part, however, the paper died with its owner. ,t Queene Hooper Foster managed the bookstore at South Street Seaport Museum for many years and is former chairman ofthe New York Yacht Club Library Committee, which is how she got interested in this sort ofthing. 27