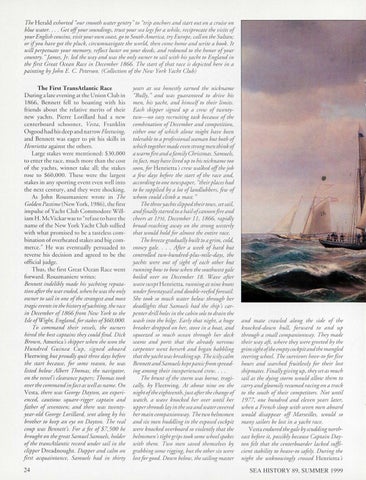 The H erald exhorted "our smooth water gentry" to "trip anchors and start out on a cruise on blue water. ... Get offyour soundings, trust your sea legs for a while, reciprocate the visits of your English cousins, visit your own coast, go to South America, try Europe, call on the Sultan; or ifyou have got the pluck, circumnavigate the world, then come home and write a book. It will perpetuate y our memory, reflect luster on your deeds, and redound to the honor ofyour country. "fa mes, f r. led the way and was the only owner to sail with his yacht to England in the first Great Ocean Race in December 1866 The start of that race is depicted here in a painting by john E. C. Peterson. (Collection ofthe New York Yacht Club)

The First TransAtlantic Race During a late evening at the Union C lu b in 1866, Bennett fell to boasting with his fri ends about the relati ve merits of their new yachts. Pierre Lori ll ard had a new centerboard schoon er, Vesta, Franklin Osgood had his deep and narrow Fleetwing, and Bennett was eager to pit hi s skills in H enrietta against the others. Large stakes were menti oned: $3 0,000 to enter the race, much more than the cost of the yachts, w inn er rake all ; the stakes rose to $60 ,000. These were the largest stakes in any sporting evem even well into the next cenwry, and they we re shockin g. As John Rousmaniere wro te in The Golden Pastime (New York, 1986), the first impu lse ofYachr C lub Commodore William H . M cVickar was to " refuse to have the name of the New York Yacht C lub sullied with what promised to be a casteless co mbination of overheated stakes and big commerce." He was eve ntuall y persuaded to reverse his decision and agreed to be the official judge. Thus, the first Great Ocean Race we nt forward. Rousmani ere writes: Bennett indelibly made his yachting reputation after the war ended, when he was the only owner to sail in one ofthe strangest and most tragic events in the history ofyachting, the race in December of 1 866 from New York to the Isle of Wight, England, for stakes of$60, 000. To command their vessels, the owners hired the best captains they could find. D ick Brown, Americas skipper when she won the Hu ndred Guinea Cup, signed aboard Fl eetwing but proudly quit three days before the start because, for some reason, he was listed below Albert Thomas, the navigator, on the vessels clearance papers; Thomas took over the command in fact as well as name. On Vesta, there was George Dayton, an experienced, cautious square-rigger captain and father of seventeen; and there was twentyyear-old George Lorillard, sent along by his brother to keep an eye on Dayton. The real coup was Bennetts. For a fee of $7,500 he brought on the great Samuel Samuels, holder ofthe transAtlantic record under sail in the clipper Dreadnought. D apper and calm on first acquaintance, Samuels had in thirty

years at sea honestly earned the nickname "Bully, " and was guaranteed to drive his men, his yacht, and himself to their limits. Each skipper signed up a crew of twentytwo-no easy recruiting task because of the combination of December and competition, either one of which alone might have been tolerable to a professional seaman but both of which together made even strong men think of a warm fire and afamily Christmas. Samuels, in fact, may have lived up to his nickname too soon, for H enrietta s crew walked offthe job a few days before the start of the race and, according to one newspaper, "their places had to be supplied by a lot oflandlubbers, few of whom could climb a mast. " The threeyachts slipped their tows, set sail, andfinally started to a hail ofcannon fire and cheers at }PM, December 11, 1866, rapidly broad-reaching away on the strong westerly that would hold for almost the entire race. The breeze gradually built to a grim, cold, snowy gale. . . . After a week of hard but controlled two-hundred-plus-mile-days, the yachts were out of sight of each other but running bow to bow when the southwest gale boiled over on December 18. Wave after wave swept H enrietta, running at nine knots under forestaysail and double-reefedforesail. She took so much water below through her deadlights that Samuels had the ships carpenter drill holes in the cabin sole to drain the wash into the bilge. Early that night, a huge breaker dropped on her, stove in a boat, and squeezed so much ocean through her deck seams and ports that the already nervous carpenter went berserk and began babbling that theyachtwas breaking up. The icily calm Bennett and Samuels keptpanicfrom spreading among their inexperienced crew . ... The brunt ofthe storm was borne, tragically, by Fleetwing. At about nine on the night ofthe eighteenth, just after the change of watch, a wave knocked her over until her upper shrouds lay in the sea and water covered her main companionway. The two helmsmen and six men huddling in the exposed cockpit were knocked overboard so violently that the helmsmen s tight grips took some wheel spokes with them. Two men saved themselves by grabbing some rigging, but the other six were Lost for good. Down below, the sailing master

and mate crawled along the side of the knocked-down hull, forward to and up through a small companionway. They made their way aft, where they were greeted by the grim sightofthe empty cockpit and the mangled steering wheel. The survivors hove-to for five hours and searched fruitlessly for their Lost shipmates. Finally giving up, they set as much sail as the dying storm would allow them to carry and gloomily resumed racing on a track to the south of their competitors. Not until 1377, one hundred and eleven years Later, when a French sloop with seven men aboard would disappear off Marseilles, would so many sailors be lost in a yacht race. Vesta endured the gale by scudding northeast before it, possibly because Captain Dayton felt that the centerboarder lacked sufficient stability to heave-to safely. During the night she unknowingly crossed H enrietta s