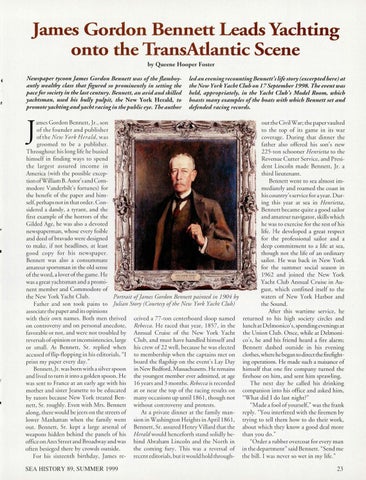 Newspaper tycoon James Gordon Bennett was ofthe flamboyantly wealthy class that figu,red so prominently in setting the pace for society in the last century. Bennett, an avid and skilled yachtsman, used his bully pulpit, the New York Herald, to promote yachting andyacht racing in thepublic rye. The author

ames Gordon Bennett, Jr., so n of th e fo under and p ublisher of th e New York H erald, was groo med to be a publisher. T h ro ughout h is lo ng life he bus ied himself in fi nding ways to spend th e la rgest ass ured inco m e in Ameri ca (with the possible exception ofWilliam B. Astor's and Commodore Vand erbilt's fo rtun es) fo r the benefi t of the paper and himself, perhaps no t in thatord er. Considered a dandy, a ryrant, and the first exa mple of the horrors of the Gilded Age, he was also a devo ted newspaperman, whose evety fo ible and deed of bravado were designed to make, if not headlines, at least goo d co py for hi s n ews pape r. Bennett was also a consummate amateur sportsman in th e old sense of the word, a lover of the gam e. H e was a great yachtsm an and a pro minent member and Commodore of the New Yo rk Yacht C lub . Portrait off ames Gordon Bennett painted in 19 04 by Father and so n took pains to Julian Story (Courtesy of the New York Yacht Club) associate the paper and its opinions with their own nam es . Both men thrived ceived a 77-to n centerboard sloop named on controversy and o n personal anecdo te, Rebecca. He raced that year, 1857, in the favorab le or not, and we re not tro ubled by Annual C ruise of the N ew Yo rk Yacht reve rsals of opinion o r inconsistencies, large C lub, and must have handl ed him self and or small. As Bennett, Sr. replied when his crew of22 well, because he was elected accused offlip-fl opping in his edi to rials, "I to m embershi p when the captains met o n pri nt my paper every day. " board the fl agship on the event's Lay Day Bennett, Jr. was bo rn with a silver spoon in New Bedford, Massachusetts. H e remai ns and lived to turn it in to a golden spoon. H e the yo ungest member ever admi tted, at age was se nt to France at an earl y age with his 16 years and 3 m onths. Rebecca is recorded m other and sister Jeanette to be educated at or near the top of the racing res ul ts o n by tuto rs because New Yo rk treated Ben- m any occasions up until 186 1, tho ugh not nett, Sr. ro ughly. Even with Mrs. Bennett witho ut controversy and p ro tests. alo ng, there wo uld be jeers o n the streets of At a priva te dinn er at th e fa mil y manlower Manhattan when the family went sio n in Was hington H eights in Ap ril 1861, out. Bennett, Sr. ke pt a large arsenal of Benne tt, Sr. ass ured H enry Villard that the weapons hidden behind the panels of his Herald wo uld henceforth stand solidly beoffice on Ann Street and Broadway and was hind Abraham Lincoln and the No rth in often besieged there by cro wds o utside. th e co ming fu ry. T his was a reve rsal of For his sixteenth birthday, Jam es re- recent editorials, but it would hold through-

" out th e C ivil War; the paper va ulted to the top of its gam e in its war coverage. During that dinner the fa ther also offered his so n's new 225-ton schooner Henrietta to the Revenue C utter Service, and Pres ident Lincoln m ade Bennett, Jr. a thi rd lieutenant. Bennett we nt to sea almost imm ediately and roa med the coast in his country's se rvice fo r a year. During this year at sea in Henrietta, Bennett becam e quite a good sailor and am ateur naviga to r, skills which he was to exercise fo r the rest of his â&#x20AC;˘ life. He developed a great respect for th e p ro fessional sailo r and a deep commitment to a life at sea, though not the li fe of an ordinary sailor. H e was back in New York for the summ er social season in 1962 and joined the N ew York Yacht C lub Annual C ruise in August, whi ch co nfined itself to the waters of New Yo rk H arbor and the So und. After this wartime service, he returned to his hi gh sociery circles and lunch at D elmoni co' s, spending evenings at the Union Club. O nce, while at D elmonico's , he and his fri end heard a fire alarm ; Benn ett das hed outside in his evening clothes, where he began to direct the firefighting operatio ns. H e made such a nuisance of himself that one fire company turned the firehose o n him , and sent him sprawling. The next day h e called his drinking companio n in to hi s office and asked him, "What did I do las t nigh t?" "M ade a foo l of yo urself," was the frank reply. "You interfered with the firemen by trying to tell them how to do their work, abo ut which they know a good deal more than yo u do." "Order a rubber overcoat for every m an in the department" said Bennett. "Send me the bill. I was never so wet in my life."