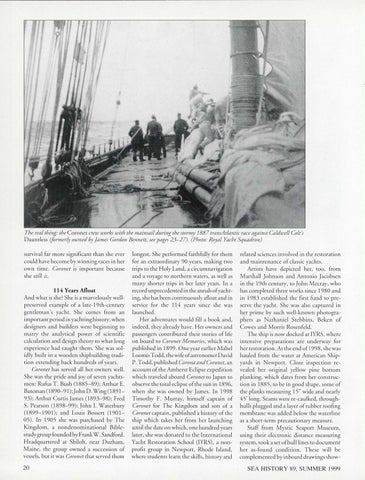 survival fa r mo re significant than she ever co uld have beco me by winnin g races in her own time. Coronet is important because she still is.

114 Years Afloat And what is she? She is a marvelously well preserved example of a late-19 th-ce ntury ge ntl eman&#39;s yacht. She co mes from an important peri od in yachting history, when des igners and builders we re beginning to marry the analytical power of scientifi c calcul atio n and design theory to what lo ng experi ence had taught th em. She was solidly built in a wooden shipbuilding tradition extending back hundreds of yea rs. Coronet has served all her owners well. She was the pride and joy of seven yachtsmen: Rufus T. Bush (188 5-89); Art hur E. Bateman (1890-9 1); John D . W ing (189 193); Arthur C urtis James (1893- 98); Fred S. Pearson (1898-99); John I. Waterbu ry (1899- 1901 ); and Louis Bossert (190 105) . In 1905 she was purchased by Th e Kingdom, a nondeno min ati o nal Bib lestudy group founded by Frank W . Sandford. H eadquartered at Shiloh, near Durham, M aine, the gro up owned a success io n of vessels, bur it was Coronet that served them

longest. She performed fa ithfully for them for an extraordinary 90 yea rs, makin g rwo trips to the Holy Land, a circumn avigation and a voyage to northern waters, as well as many shorter trips in her later years. In a reco rd un precede med in th e annals of yacht ing, she has been continuously afloat and in service for the 11 4 yea rs since she was launched. H er adve ntures wo uld fill a book and, indeed, they already have. H er owners and passe ngers co mributed their stories of life on board to Coronet Memories, which was published in 1899 . O ne yea r earlier Mabel Loomis Todd, the wife ofas tronomer D avid P. Todd, published Corona and Coronet, an acco unt of the Am herst Eclipse expedition which traveled aboard Coronet to Japan to observe the total ecl ipse of the sun in 1896, when she was owned by James. In 1998 Timothy F. Murray, himself captain of Coronet for T he Kingdom and son of a Coronet captain , pub lished a history of th e ship which rakes her from her launching umil the dare o n whi ch , one hundred years later, sh e was donated to the International Yacht Res toration Schoo l (IYRS), a nonprofit gro up in New port, Rhode Island , where smdem s learn the skills, history and

related sciences involved in the restoratio n and maimenance of classic yachts. Artists have depicted her, too , from M arshall Johnson and Antonio Jaco bsen in the 19th ce ntury, to John Mecray, who has co mpleted three wo rks sin ce 1980 and in 1983 established the first fund to preserve th e yacht. She was also captured in her prime by such well -known photographers as Nathaniel Stebbins, Beken of Cowes and Mo rris Rosenfeld . T he ship is now docked at IYRS, where imensive preparations are und e1way for her resto ratio n. Ar the end of 1998, she was hauled from the wa ter at American Shipya rds in Newport. C lose in spection revealed her origin al ye ll ow pin e bottom planking, which dates from her co nstruction in 1885, to be in good shape, so me of the pl anks measuring 15&quot; wide and nearly 45 &#39; long. Seam s were re-caulked, throughhulls plugged and a layer of rubber roo fin g membrane was added below the waterline as a short-term precautionary measure. Staff from Mystic Seaport Museum, using their electroni c di stance measuring system , took a set of hull lines to document her as- found conditi o n. Th ese wi ll be co mplemem ed by inboard drawings show-