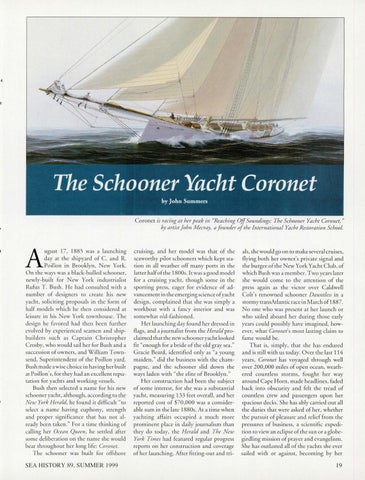 Coronet is racing at her peak in "Reaching OffSoundings: The Schooner Yacht Coronet," by artist john Mecray, a founder ofthe I nternational Yacht Restoration School.

ugust 17, 1885 was a launching day at the shipya rd of C. and R. Poillon in Brooklyn, New York. On the ways was a black-hulled schooner, newly- built for New York industrialist Rufus T. Bush. H e had consulted with a number of designers to create his new yacht, soliciting proposals in the form of half models whi ch he then co nsidered at leisure in his New Yo rk townhouse. The design he favored had then been further evolved by experienced seamen and shipbuilders such as Captain C hristopher Crosby, who wo uld sail her for Bush and a successio n of owners, and William Townsend, Superintendent of the Poillon yard . Bush made a w ise choice in having her built at Poillon 's, for th ey had an excellent reputation for yachts and working vessels. Bush th en selected a name for his new schooner yacht, alth ough, according to the New York H erald, he found it difficult "to select a name having euphony, strength and proper significance that has not already been taken. " For a time thinking of cal lin g her Ocean Queen, he settled after some deliberation o n the name she wo uld bear throughout her long life: Coronet. T he schooner was built for offshore

cru1s1ng, and her model was that of th e seaworthy pilot schooners which kept station in all weather off many ports in the latter half of the l 800s. lt was a good model for a crui sin g yacht, though som e in the sporting press, eager for evidence of advancement in the em erging science ofyacht design, complained that she was simply a workboat with a fancy interior and was somewhat old-fashioned. Her laun ching day found her dressed in fl ags, and a journalist from the H erald proclaimed that the new schoo ner yacht looked fir "enough for a bride of the old gray sea." Gracie Beard, identified on ly as "a yo ung maiden," did the business with the champagne, and the schooner slid down the ways laden with "th e elite of Brooklyn. " Her construction had been the subj ect of som e interest, for she was a substantial yacht, m easuring 133 feet overall, and her reported cost of $70,000 was a cons iderable sum in the late 1880s. At a time when yachting affairs occupied a much more promin ent place in daily journalism than they do today, the Herald and The New York Times had fea rnred regular progress reports on her co nstruction and coverage of her laun ching. After firrin g-o ur and tri-

als, she wo uld go on to make several cruises, flying both her owner's private signal and rhe burgee of the New York Yacht C lub, of whi ch Bush was a member. Two years later she wo uld come to the attention of rhe press again as the victo r over Caldwell C olt's renowned schooner Dauntless in a stormy transAdantic race in March of 1887. No one who was presenr at her launch or who sailed aboard her during those early years could possibly have imagined, however, wha t Coronet's most lasting claim to fame would be. That is, simply, that sh e has endured and is sti ll with us today. O ve r the last 11 4 years, Coronet has voyaged through well over 200,000 miles of open ocean , weathered counrless storms, fought her way aro und Cape Horn , made headlines, faded back into obscurity and felt the tread of countless crew and passengers upon her spacious decks. She has ably carried o ut all the duties that were asked of her, whether the pursuit of pleasure and relief from the pressures of business, a scienrific expedition to view an eclipse of the sun or a glo begirdling mission of prayer and eva ngelism. She has outl as ted all of the yachts she ever sailed with or against, beco ming by her