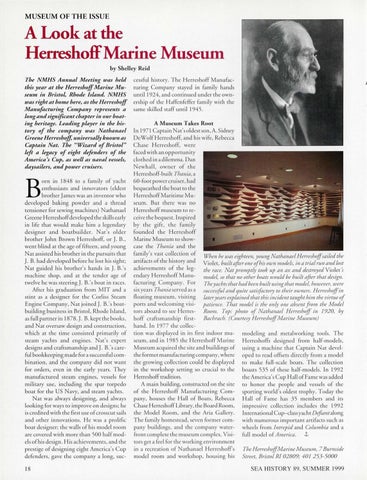 MUSEUM OF THE ISSUE

A Look at the Herreshoff Marine Museum by Shelley Reid

The NMHS Annual Meeting was held this year at the Herreshojf Marine Museum in Bristol, Rhode Island. NMHS was right at home here, as the Herreshojf Manufacturing Company represents a long and significant chapter in our boating heritage. Leading player in the history of the company was Nathanael Greene Herreshoff, universally known as Captain Nat. The "Wizard of Bristol" left a legacy of eight defenders of the America 's Cup, as well as naval vessels, daysailers, and power cruisers. o rn in 1848 to a fam il y ofyachr enthusias rs and innovators (eld esr bro rher James was an inve ntor who develo ped bakin g powder and a rhread tensio ner for sewing m achines) Nathanael G reene H erreshoff developed the skills earl y in life that would make him a legendary des igner and boatbuilder. Nat's o lder brother John Brown H erreshoff, or]. B., we nt blind at rhe age of fifteen, and yo ung Nat assisted his brother in the pursuits that J . B. had developed before he los t his sight; Na t guided his brother's hands in ]. B.'s machin e shop, and at th e render age of rwe lve he was steering ] . B. 's boat in races . After hi s graduarion from MIT and a stint as a des igner for rhe Co rliss Steam E ngine Co mpany, Na t jo in ed J . B.'s boarbuilding busin ess in Bristo l, Rhode Island , as full partner in 1878. ]. B. kept the boo ks, and Na t oversaw design and constructio n, which at the time consisted primarily of steam yachrs and engines. Nar's expert des igns and craftsmanship andJ . B.'s careful bookkeeping m ade for a successful combination , and the company did not wa nt for o rders, even in the earl y years. T hey manufactured steam engines, vessels for mili tary use, including the spar torpedo boat for the US Navy, and steam yachts. Nat was always des igning, and always lookin g fo r ways to improve on des igns; he is credited with the first use of crosscu r sa ils and other innovarions. H e was a prolific boat designer; the wall s of his mod el roo m are covered with more than 500 half models of his des ign . His achievem ents, and the presti ge of des igning eight America's C up defenders, gave the company a lo ng, sue-

A Museum Takes Root In 1971 Captain Nat's oldest son,A. Sidney D eWolfHerreshoff, and hi s wife, Rebecca C hase H erreshoff, we re faced with an opportuni ry clo thed in a dilemma. Dan Newhall, owner of the H erreshoff-built Thania, a 60-foot power cruiser, had bequeathed the boat to the H erreshoffMaririme M useum . Bur there was no H erreshoff museum to receive the bequest. Inspired by the gift , the fa mil y fo unded the H erres hoff Mari ne Museum to showcase the Thania and the fa mily's vast collectio n of When he was eighteen, young Nathanael H erreshojfsailed the artifacts of the histo ry and Violet, built after one ofhis own models, in a trial run and Lost achievements of the leg- the race. Nat promptly took up an ax and destroyed Violet s endary H erreshoff Man u- model, so that no other boats would be built after that design. fact uring Company. For The yachts that had been built using that model, however, were six yea rs Thania served as a successful and quite satisfactory to their owners. H erreshojfin flo ating museum , visiting Later years explained that this incident taught him the virtue of ports and welco ming vis i- patience. That model is the only one absent from the Model tors aboard to see H erres- Room. Top : photo of Nathanael Herreshojf in 1920, by hoff craftsmanship fi rst- Bachrach. (Courtesy H erreshojfMarine Museum) hand. In 1977 the co llecrion was displayed in its first indoor mu- modeling and metalwo rkin g too ls. T he seum , and in 1985 the Herreshoff Marine H erreshoffs designed from half-models, M useum acquired rh e site and bui ld ings of using a machin e that Captain Nat develthe for mer manufacturing company, where oped to read offsets directly from a model the growing co llectio n co uld be displayed to make fu ll -scale boars. The collection in the wo rkshop setting so crucial to the boas ts 535 of these half- models. In 1992 H erreshoff tradition . the.America's C up H all ofFame was added A main building, constructed on the site to ho nor th e people and vessels of the of the H erreshoff Manufacturing Com- spo rting wo rld's o ldes t troph y. Today the pany, houses the Hall of Boats , Rebecca H all of Fame has 35 members and its C hase H erreshoffLibrary, the Board Room , impressive coll ectio n includes the 1992 th e Model Room, and the Aria Gallery. Internatio nal C up-class yacht Defiantalon g T he fa mily ho mes tead, seve n former com - with numerous important artifac ts such as pany buildings, and the company water- wheels from I ntrepid and Columbia an d a front complete the museum comp lex. Visi- full model of America. .t to rs get a feel for the working environment in a recreation of Natha nael H erreshoffs The H erreshojfMarine Museum, 7 Burnside model room and wo rkshop, housing his Street, Bristol RI 02809; 401 253-5000