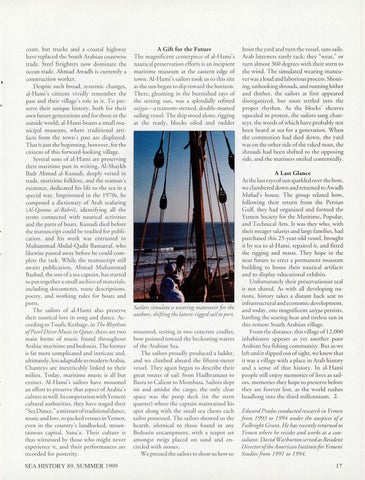 coast, but trucks and a coastal highway have rep laced the South Arabian coastwise trade. Steel freighters now dominate the ocean trade. Ahmad Awadh is currently a construction worker. Desp ite such broad, systemic changes, al-Hami &#39;s citizens vividly remember th e past and their village&#39;s role in it. To preserve their unique history, both for their own future generations and for those in the outside world, al-Hami boasts a small muni cipal museum, where traditional artifacts from the town&#39;s past are di splayed. That is just the beginning, however, for the citizens of this forward- looking vi llage. Several sons of al-Hami are preserving their maritime past in writing. Al-Shaykh Badr Ahmad al-Kassadi, deeply versed in trade, maritime folklore, and the sea man &#39;s existence, dedicated his life to the sea in a special way. Imprisoned in the 1970s, he co mposed a dictionary of Arab seafaring (Al-Qamus al-Bahri), identifying all the terms connected with nautical activities and the parts of boats. Kassadi died before the manuscript could be readied for publication, and his work was entrusted to Muhammad Abdul-Qadir Bamatraf, who likewise passed away before he could complete the task. While the manuscript still awaits publication, Ahmad Muhammad Baabad, th e so n of a sea captain, has starred to pm together a small archive of materials, including documents, route descriptions, poetry, and working rules for boats and ports. The sa ilors of al-Hami also preserve their nautical lore in song and dance. According to Toufic Kerbage, in The Rhythms ofPearl Diver Music in Qatar, th ere are two main forms of music found throughout Arabia: maritime and bedouin. The former is far more co mplicated and intricate and , ultimately, less adaptable to modern Arabia. Chameys are inextricably linked to their milieu. Today, maritime music is all but extinct. Al-Ham i&#39;s sai lors have moumed an effort to preserve that aspect of Arabia&#39;s culture as well. In cooperation with Yemeni cultural authorities, they have staged their &quot;Sea Dance,&quot; a mixmreof traditional dance, music and lore, to packed venues in Yemen, even in the coumry&#39;s landlocked, mountainous ca pi ta! , Sana&#39; a. Their culture is thus witnessed by those who might never experience it, and their performances are recorded for posterity. SEA HISTORY 89, SUMMER 1999

A Gift for the Future The magnificent ce merpi ece of al-Ham i&#39;s nautical preservation efforts is an incip ient maritime museum at the eastern edge of town. AJ-Hami &#39;s sailors took us to th is site as the sun began to dip toward the horizon. There, gleaming in the burnished rays of the setting sun, was a splendidly refitted saiyya-a transo m-sterned, doub le-masted sailing vessel. The sh ip stood alone, rigging at the ready, blocks o iled and rudder

ho ist the ya rd and turn the vessel, sa ns sails. Arab laree ners rarely tack; they &quot;wear,&quot; or mm almost 360 degrees with their stern to the wind. T he simulated wea rin g maneuverwas a lo ud and laborio us process. Sho uting, unhooking sh ro uds, and runnin g hither and thither, the sailors at fi rst ap peared disorgan ized, but soo n settl ed in to th e proper rhyth m. As the blocks&#39; sheaves squealed in pro test, the sailo rs sang chanteys, the words of which have pro bably no t been hea rd at sea fo r a gen eratio n. W hen rhe commotion had died down , the yard was on the other side of the raked mas t, the shrouds had been shi fre d to the opposing side, and the mari ners smiled co ntentedly.

As the last rays of sun sparkled over the bow,

Sailors simulate a wearing maneuver for the authors, shifting the lateen-rigged sail to port. mounted, resting in two co ncrete cradles, bow pointed toward the becko ning waters of the Arabian Sea. The sailors proudly produced a ladder, and we climbed aboard the fifteen-meter vessel. They again began to describe their great routes of sail: from Hadhramam to Basra to Calicut to Mombasa. Sailors slept on and amidst the cargo; the only clear space was the poop deck (in the stern quarter) where the captain maintained his spo t along with the small sea chests each sai lor possessed. The sa ilors showed us the hearth, identical to those found in any Bedouin encampment, with a teapot set amongst twigs placed on sand and encircled with stones. We pressed the sai lors to show us how to

we clambered down and remrned toAwadh Mafud&#39;s ho use. T he group related how, fo llowing their return from the Persian G ulf, they had o rga ni zed and fo rm ed the Yemen Society for the Maritime, Popular, and Tech nical Ans. It was they who, with their meager salaries and large families, had purchased this 25-year-old vessel, bro ught it by sea to al- H ami, repaired it, and fi ned the rigging and masts. T hey hope in the near future to erect a permanent m useum bui ldi ng to house their nautical arti facts and to display educati onal exhibits. Unfort un ately their preservationist zeal is not shared. As with all developing nations, history rakes a d istant back seat to infrastructural and eco no mi c development, and today, o ne mag nificent saiyya persists, barding the sea ring heat and ti re less sun in this remote South Arabian village. From the dista nce, th is village ofl 2,000 inhabitants appears as yet another poo r Arabian Sea fish ing comm un ity. But as we left and it sli pped out of sight, we knew that it was a village with a place in A rab histo ry and a sense of that hi story. In al-H ami people sti ll enjoy memo ries oflives as sail ors, memories they hope to p reserve befo re they are forever lost, as the wo rld rushes head long into the thi rd m illennium . .t Edward Prados conducted research in Yemen ftom 1993 to 1994 under the auspices of a Fulbright Grant. He has recently returned to Yemen where he resides and works as a consultant. David Warburton served as Resident D irectorofthe American Institutefor Yemeni Studiesftom 1991to1994 .