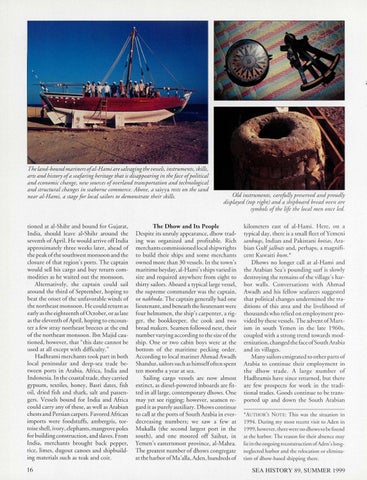 The land-bound mariners ofal-Hami are salvaging the vessels, instruments, skills, arts and history ofa seafaring heritage that is disappearing in the face ofpolitical and economic change, new sources ofoverland transportation and technological and structural changes in seaborne commerce. Above, a saiyya rests on the sand near al-Hami, a stage for local sailors to demonstrate their skills.

tioned at al-Shihr and bound for G ujarat, India, should leave al-Shihr aro und the seventh of April. He wo uld arrive off India ap proxim ately three weeks late r, ahead of the peak of the southwest monsoon and the closure of that region's ports. T he captain wo uld sell his cargo and buy return commodities as he waited out the monsoon . Alternatively, the cap tain co uld sail aro und the third of September, hoping to beat the onset of the unfavora ble winds of the northeast monsoon . He co uld return as early as th e eighteenth of October, or as late as the eleventh of April , hoping to enco unter a few stray northeast breezes at the end of the northeast monsoo n. Ibn Majid cautioned, however, that "this date cannot be used at all except with difficulty." Hadhrami m erchants took part in both local peninsular and deep-sea trade between ports in Arabia, Africa, India and Indonesia. In the coastal trade, they carried gyps um, textiles, honey, Basri dates, fish oil, dried fish and shark, salt and passengers. Vessels bound for India and Africa could carry any of these, as well as Arabian chests and Persian carpets. Favored African imports were foodstuffs, ambergris, tortoise shell, ivory, elephants, mangrove poles for building construction , and slaves . From Indi a, m erchants brought back pepper, rice, limes, dugo ut canoes and shipbuilding materials such as teak and coir.

The Dhow and Its People Despite its unruly appearance, dhow trading was organized and profitable. Rich merchants commissioned local shipwrights to build their ships and some merchants owned more than 30 vessels. In the town 's m ari time heyday, al-Hami'sshipsvaried in size and required anywhere from eight to thirty sailo rs. Aboard a typical large vessel, the supreme co mm ander was the captain, or nakhoda. The captain generally had one lieutenant, and beneath the lieutenant we re four helmsmen, the ship's carpenter, a rigger, the bookkeeper, the cook and two bread m akers. Seamen followed next, their number varying acco rding to the size of the ship. One o r two cabin boys were at the bottom of the maritime pecking order. According to local mariner Ahmad Awadh Shandur, sailors such as himself often spent ten months a year at sea. Sailing cargo vessels are now almost extinct, as diesel-powered inboards are fitted in all large, co ntemporary dhows. One may yet see rigging; however, seam en regard it as purely auxiliary. Dhows continue to call at the ports of South Arabia in everdecreasing numb ers; we saw a few at Mukalla (the second largest port in the south), and one moored off Saihut, in Yemen's easternmost province, al-Mahra. The greatest number of dhows congregate at the harbor of Ma' all a, Aden, hundreds of

kilometers east of al-H ami . H ere, on a typical day, there is a small fleet ofYemen i sanbuqs, Indian and Pakistani kotias, Arabian G ulf jalbuts and, perhaps, a magnificent Kuwaiti bum.* Dhows no longer call at al-Hami and the Arabian Sea's pounding surf is slowly destroying the remains of the village's harbor walls. Conversations with Ahmad Awadh and his fe llow seafarers suggested that political changes undermined the traditions of this area and the livelihood of thousands who reli ed o n employment provided by these vessels. The advent ofMa rxism in so uth Yemen in the late 1960s, coupled with a strong trend towards modernization, changed the face ofSo uth Arabia and its villages. Many sailors emigrated to other parts of Arabia to conti nue their employment in the dho w trade . A large number of H adhramis have since returned, but there are few prospects for work in the traditional trades . Goods continue to be transported up and down the South Arab ian *AUTHOR'S NOTE: Th is was the si tuation in 1994. During my most recent visit to Aden in 1999, however, there were no dhows to be found at the harbor. Th e reaso n fo r their absence may lie in the ongo ing reconstruction ofAden's longneglecred harbor and the relocation or elimination of dhow-based shipping there.