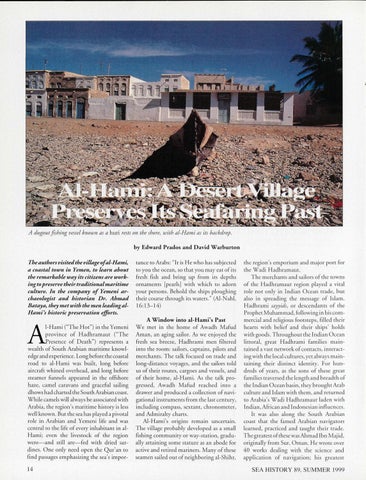 A dugout fishing vessel known as a huri rests on the shore, with al-Hami as its backdrop. by Edward Prados and David Warburton The authors visited the village ofal-Hami, a coastal town in Yemen, to learn about the remarkable way its citizens are working to preserve their traditional maritime culture. In the company of Yemeni archaeologist and historian Dr. Ahmad Bataya, they met with the men leading alHami&#39;s historic preservation efforts. -Hami (&#39;The Hor&quot;) in the Yemeni rovince of Hadhramaut (&quot;The resence of D eath &quot;) represents a wealth of South Arabian maritime knowledge and experience. Long before the coas tal road to al-Hami was built, long before aircraft whined overhead, and long before steamer funnels appeared in the offshore haze, camel caravans and graceful sailing dhows had charted the SouthArabian coas t. While camels will always be associated with Arabia, the region &#39;s maritime history is less well known. But the sea has played a pivotal role in Arabian and Yemeni life and was central to the life of every inhabitant in alH ami; even the lives tock of the region were-and still are- fed with dried sardines . One only need open the Qur&#39;an to find passages emphasizing the sea&#39;s impor-

ranee to Arabs: &quot;It is H e who has subj ected to you the ocean, so that you may eat of its fresh fish and bring up from its depths ornaments [pearls) with whi ch to adorn your persons . Behold the ships ploughing their course through its waters.&quot; (Al-Nahl, 16:1 3-14)

A Window into al-Hami&#39;s Past W e met in the home of Awadh Mafud Aman, an aging sailor. As we enj oyed the fresh sea breeze, H adhrami men filtered into the room: sailors, captains, pilots and merchants. The talk focused on trade and long-distance voyages, and the sailors told us of their routes, cargoes and vessels, and of their home, al-H ami. As the talk progressed, Awadh M afud reached into a drawe r and produced a collection of navigational instruments from the las t century, including compass, sextant, chronometer, and Admiralty charts . Al-Hami &#39;s ori gins remain uncertain. The village probably developed as a small fishing community or way-station, gradually attaining some stature as an abode for active and retired mariners. M any of these seamen sailed out of neighboring al-Shihr,

the region &#39;s emporium and major port for the W adi H adh ramaut. T he merchants and sailors of the towns of the H adhramaut region played a vital role not only in Indian O cean trade, but also in spreading the message of Islam. H adhrami sayyids, or descendants of th e Prophet Muhammad, fo llowing in his commercial and religious footsteps, filled their hearts with belief and their ships&#39; holds with goods. Throughout the Indian O cean littoral, great H adhrami famili es maintain ed a vas t network of co ntacts, interactin g with th e local cultures, yet always maintaining their distinct identity. For hundreds of years, as the sons of th ese great families trave rsed the length and breadth of the Indian O cean basin, they brought Arab culture and Islam with them , and returned to Arabia&#39;s W adi Hadhramaut lad en with Indian, African and Indonesian influences. It was also along the So uth Arabian coas t that the fam ed Arabian navigators learned, practiced and taught their trade. The greatest ofrhesewas Ahmad Ibn Majid, originally from Sur, Oman. H e wro te over 40 works dealing with the science and applica tion of naviga tion; his greates t