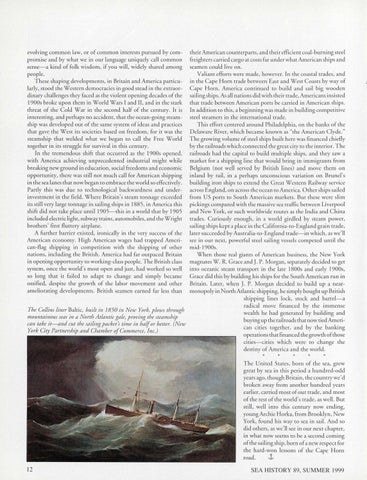 evolving common law, or of common interests pursued by compromise and by what we in our language uniquely call common sense-a kind of folk wisdom , if yo u will , widely shared amon g peop le. These shapin g developments, in Britain and America particularl y, stood the Western democracies in good stead in the extraordinary challenges they faced as the violent opening decades of the 1900s broke upon them in World Wars I and II , and in the stark threat of the Cold War in the second half of the century. It is interesting, and perhaps no accident, that the ocean-going steamship was developed out of the same system of ideas and practices that gave the West its societies based on freedom, for it was the steamship that welded what we began to call the Free World together in its struggle for survival in this century. In the tremendous shift that occurred as the 1900s opened, with America achieving unprecedented industrial might while breaking new ground in education, social freedoms and econo mic opportunity, there was still not much call for American shipping in the sea lanes that now began to embrace the wo rld so effectively. Partly this was due to technological backwa rdness and und erin ves tment in the field. W here Britain &#39;s steam tonnage exceeded its still very large tonnage in sailing ships in 1885, in America this shift did nor rake place until 1905-this in a wo rld that by 1905 included electriclighr, subway trains, automobiles, and the W right brothers&#39; first fluttery airplane. A further barrier existed, ironically in the ve ry success of the American economy. High Ameri can wages had trapped American -flag shipping in competition with the shipping of other nations, including rhe British. Ameri ca had fa r outpaced Britain in opening opportunity to working-class people. T he British class system , once the wo rld&#39;s most open and just, had worked so well so long that it failed to adap t to change and simply became oss ified, despite the growth of the labor movement and other ameliorating developments. British seamen earned far less than

their American counterparts, and their effic ient coal-burning steel freighters carried ca rgo at costs far under what Am eri ca n ships and seamen could live on. Valiant efforts we re made, however. In the coastal trades, and in the Cape Horn trade between East and West Coasts by way of Cape Horn, America continued to build and sail big wooden sailing ships. As all nati ons did with their trade, Americans in sisted that trade between Ame rican ports be carried in Am erican ships. In additi on to this, a beginning was made in building competitive steel steam ers in the internati onal trade. This effort centered around Philadelphia, on the banks of the Delaware River, which became known as &quot;the American C lyde.&quot; T he growing volume of steel ships built here was fin anced chiefly by the railroads which co nn ected the grea t city to the interior. T he railroads had the capital to build mul tiple ships, and they saw a market fo r a shipping line that would bring in immigrants from Belgium (not well served by British lines) and move them on inl and by rail, in a perhaps un conscious variation on Brunel&#39;s building iron ships to extend th e G rea t W estern Railway service across England, on ac ross the ocean to America. Other ships sailed from US ports to So uth American markets. But these were slim pi ckin gs co mpared with th e mass ive sea traffi c betwee n Liverpool and New York, or such wo rldwide routes as the India and C hina trades . C uriously enough, in a wo rld girdled by steam power, sailin g ships kept a place in the Californ ia-to-England grain trade, later succeeded by Australia-to-England trade-in which, as we&#39;ll see in our next, powerful steel sailing vessels competed until the mid-1900s. W hen those real giants of American business, the New York magnates W.R. G race and J.P. Morgan, separately decided to get into oceanic steam transport in the late 1800s and early 1900s, G race did this by building his ships for the Sou th American run in Britain. Later, when ] . P. Morgan decided to build up a nearmonopoly in No rth Atlantic shipping, he simply bought up British shipping lines lock, stock and barrel-a radical move financed by the immense The Collins liner Baltic, built in 1850 in New Yo rk, plows through wealth he had generated by building and mountainous seas in a North Atlantic gale, proving the steamship buying up the railroads that now tied American take it-and cut the sailing packet&#39;s time in half or better. (New can citi es toge ther, and by the banking York City Partnership and Chamber of Commerce, I nc.) operations that financed the growth ofrhose cities-cities which were to change the destin y of America and the wo rld. * * * * * T he U nited States, born of the sea, grew great by sea in this period a hundred-odd years ago, though Britain, the country we&#39;d broken away from anothe r hundred years earlier, carried most of our trade, and most of the rest of the wo rld&#39;s trade, as well. Bur still, well into this century now ending, yo ung Archie Horka, from Brooklyn, New York, found his way to sea in sail. And so did others, as we&#39;ll see in our next chapter, in what now seems to be a second coming of the sailing ship , born of a new respect for the hard-won lessons of the Cape Horn road. 1,