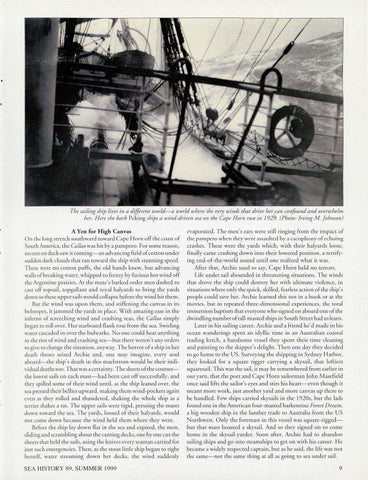 The sailing ship lives in a different world-a world where the very winds that drive her can confound and overwhelm her. H ere the bark Peking ships a wind-driven sea on the Cape Horn run in 1929. (Photo: I rving M. Joh nson)

A Yen for High Canvas O n th e long stretch southward towa rd Cape Horn off rhe coast of So uth America, the Callao was hit by a pampero. For some reason, no one on deck saw it coming-an advancing field of cotton under sudden dark clouds thar ran toward th e ship with stunning speed . These we re no co rron puffs, rhe old hands knew, but adva ncing walls ofbreaki ng wate r, whipped to frenzy by furious hot wind off the Argentine prairies. At the mate's barked order men das hed to cast off topsail , topgallant an d royal halya rds to bring rhe yards down so these upper sails wo uld co ll apse before rhewind hit them. Bu r the wind was upon them , and stiffening the canvas in irs bolrropes, it jammed the yards in place. With amazing ease in the in ferno of screeching wind and cras hing seas, the Callao simply began to roll over. Her starboard fl ank rose from the sea. Swirl in g water cascaded in over the bulwa rks. No one could hear anythin g in the riot of wind and crashing sea-bur there weren 't any orders to give to change the situation, anyway. T he horror of a ship in her death throes seized Archi e and , o ne may imagine, every soul aboard- the ship's death in thi s maelstrom would be their individual deaths too. T hat was a certainty. The sheers of rhe co ursesthe lowest sails on each mas t- had been cast off successfully, and they spill ed som e of their wind until, as the ship leaned over, the sea pressed their belli es upwa rd , making them wind-pockets again even as they rolled and thundered, shaking the whole ship as a terrier shakes a rat. The upper sails we re rigid, pressing the masts down toward the sea. T he ya rds, loosed of their halyards, wo uld not co me down because the w ind held them where they were. Before the ship lay down flat in the sea and expired, the men, sliding and scrambling abo ut the can ting decks, one by one cut the sheers that held the sails, using th e knives every seaman carried for just such emergencies . T hen, as the stout little ship began to right herself, water streaming down her decks, the wind suddenl y SEA HISTORY 89, SUMMER 1999

evapo rated. The men 's ears were still rin gin g from the impact of th e pampero when rhey were assa ulted by a cacophony of echoing crashes. T hese were the yards which, with their halyards loose, fin ally cam e crashing down into th eir lowered position, a terrifyin g end-of-the-world so und until one realized what it was. Afrer that, Archie used to say, Cape Horn held no terrors. Life under sail abounded in threatening situations. The winds th at drove the ship could destroy her with ultimate violence, in situations where only the qui ck, skilled, fearless action of th e ship's people co uld save her. Archie learned this nor in a book or at the mo vies, but in repeated three-dim ensional experiences, the total immersion baptism that everyone who signed on aboard one of th e dwindling numberof tall-masted ships in South Street had to learn . Later in his sailing career, Archie and a friend he'd m ade in his ocean wanderings spent an idyllic time in an Australian coastal trading ketch, a handso me vessel they spent their rime cleaning and painting to the skipper's delight. Then one day they decid ed to go home to the US. Surveying the shipping in Sydney H arbor, they looked for a square ri gger ca rrying a skysai l, th at lofti est squaresail. This was the sail, it may be remembered from earl ier in our yarn, that the poet and Cape Horn sailorman John Masefield once said lifts the sailor's eyes and stirs his heart-even though it meant more work, just another ya rd and more ca nvas up th ere to be handled . Few ships carried skysai ls in the 1920s, bur the lads found one in the America n four-masted barkentine Forest Dream, a big wooden ship in the lumber trade to Australia from the US No rthwest. Only the foremast in this vessel was square-riggedbur that mast boas ted a skysail. And so they signed on to come home in the skysai l-yarder. Soo n after, Archie had to abandon sailing ships and go into steam ships to get on with his career. H e became a widely respected captain, but as he said, th e li fe was not the same- not the sam e thing at al l as going to sea under sail.