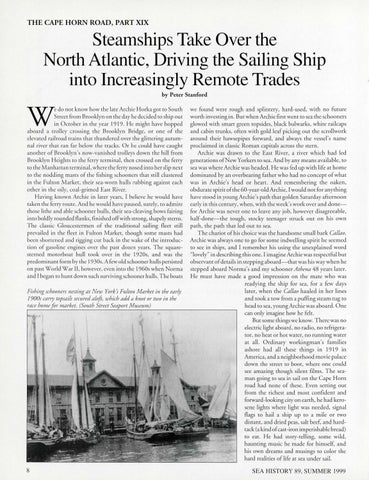 Steamships Take Over the North Atlantic, Driving the Sailing Ship into Increasingly Remote Trades by Peter Stanford e do not know how the late Archie Horka got to South Street from Brooklyn on the day he decided to ship out 111 October in the year 1919. He might have hopped aboard a trolley cross in g the Brooklyn Bridge, or one of the elevated railroad trains that thundered over the glittering autumnal river that ran fa r below the tracks . Or he could have caught another of Brooklyn&#39;s now-vanished trolleys down the hill from Brooklyn Heights to the ferry terminal, then crossed on the ferry to the Manhattan terminal, where the ferry nosed into her slip next to the nodding masts of the fishing schooners that still clustered in the Fu lton Marker, their sea-worn hulls rubbing against each other in the oily, coal-grimed East River. Having known Archie in later years, I believe he would have taken the ferry route. And he would have paused, surely, to admire those lithe and able schooner hulls, their sea-cleaving bows fairing into boldly rounded flanks, finished offwith strong, shapely sterns. T he classic G loucestermen of the traditional sai ling fleet still prevailed in the fleer in Fulton Marker, though some m asts had been shortened and ri gging cur back in the wake of the introduction of gasoline engin es over the past dozen years. The sq uaresterned motorboat hull took over in the 1920s, and was the predominant form by the 1930s. A few old schooner hulls persisted on past World War II, however, even into the 1960s when No rma and I began to hunt down such surviving schooner hulls. T he boars

we found were rough and splintery, hard-used, with no future worth inves ting in. But when Archie first went to sea the schooners glowed with sm art green topsides, black bulwarks, white railcaps and cabin trunks, often with gold leaf picking out the scrollwork aro und their hawsepipes forward, and always the vessel&#39;s name proclai med in classic Roman capitals across the stern . Archie was drawn to the East River, a river which had led generations of New Yorkers to sea. And by any means available, to sea was where Archie was headed. H e was fed up with life at home do minated by an overbearing father who had no co ncept of what was in Archie&#39;s head or heart. And remembering the oaken, obdurate spirit of the 60-year-oldArchie, I wo uld not for anything have stood in young Archie&#39;s path that gold en Saturday afre rnoon early in this century, when, with the week&#39;s wo rk over and donefor Archie was never one to leave any job, however disagreeable, half-done-the rough, stocky teenager struck out on his own path, the path that led out to sea. The chariot of his choice was the handsom e small bark Callao . Archie was always one to go for some indwelling sp irit he seemed to see in ships, and I remember h is using the unexplained word &quot;lovely&quot; in describing this one. I imagine Archie was respectful but observant of derails in stepping aboard- that was his way when he stepped aboard No rma&#39;s and my schooner Athena 48 yea rs later. H e must have made a good impression on the mare who was readying th e ship for sea, for a few days later, when the Callao hauled in her lines and rook a tow from a puffing steam tug to head to sea, yo ung Archie was aboard. One can only imagine how he felt. But som e things we know. T here was no electric light aboard, no radio, no refrigerator, no heat or hot water, no running water at all. Ordinary workingman&#39;s families ashore had all these things in 1919 in America, and a neighborhood movie palace down the street to boot, where one could see amazing though silent films. The seaman go ing to sea in sail on the Cape Horn road had none of these. Even setting out from the richest and most co nfident and forward- looking city on earth, he had kerosene lights where light was needed, signal flags to hail a ship up to a mile or two distant, and dried peas, salt beef, and hardtack (a kind of cast-iron imperishable bread) to eat. He had story-telling, som e wild, haunting music he made for himself, and his own dreams and musings to color the hard realities of life at sea under sail.