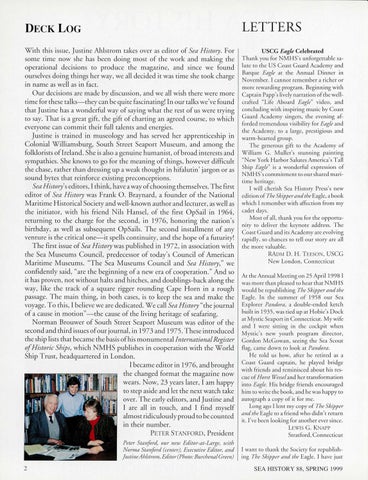 With this issue, Justine Ahlstrom takes over as editor of Sea History. For some time now she has been doing most of the work and making the operational decisions to produce the magazine, and since we found ourselves doing things her way, we all decided it was time she took charge in name as well as in fact. Our decisions are made by discussion, and we all wish there were more time for these talks-they can be quite fascinating! In our talks we&#39;ve found that Justine has a wonderful way of saying what the rest of us were trying to say. That is a great gift, the gift of charting an agreed course, to which everyone can commit their full talents and energies. Justine is trained in museology and has served her apprenticeship in Colonial Williamsburg, South Street Seaport Museum, and among the folklorists oflreland. She is also a genuine humanist, of broad interests and sympathies. She knows to go for the meaning of things, however difficult the chase, rather than dressing up a weak thought in hifalutin&#39; jargon or as sound bytes that reinforce existing preconceptions. Sea History&#39;s editors, I think, have a way of choosing themselves. The first editor of Sea History was Frank 0. Braynard, a founder of the National Maritime Historical Society and well-known author and lecturer, as well as the initiator, with his friend Nils Hansel, of the first OpSail in 1964, returning to the charge for the second, in 1976, honoring the nation &#39;s birthday, as well as subsequent OpSails. The second installment of any venture is the critical one-it spells continuity, and the hope of a futurity! The first issue of Sea History was published in 1972, in association with the Sea Museums Council, predecessor of today&#39;s Council of American Maritime Museums. &quot;The Sea Museums Council and Sea History,&quot; we confidently said, &quot;are the beginning of a new era of cooperation.&quot; And so it has proven, not without halts and hitches, and doublings-back along the way, like the track of a square rigger rounding Cape Horn in a rough passage. The main thing, in both cases, is to keep the sea and make the voyage. To this, I believe we are dedicated. We call Sea History &quot;the journal of a cause in motion&quot;-the cause of the living heritage of seafaring. Norman Brouwer of South Street Seaport Museum was editor of the second and third issues of our journal, in 1973 and 1975. These introduced the ship lists that became the basis of his monumental International Register ofHistoric Ships, which NMHS publishes in cooperation with the World Ship Trust, headquartered in London. I became editor in 1976, and brought the changed format the magazine now ,. wears. Now, 23 years later, I am happy to step aside and let the next watch take over. The early editors, and Justine and I are all in touch, and I find myself almost ridiculously proud to be counted in their number. PETER STANFORD, President

USCG Eagle Celebrated Thank you for NMHS&#39;s unforgettable salute to the US Coast Guard Academy and Barque Eagle at the Annual Dinner in November. I cannot remember a richer or more rewarding program . Beginning with Captain Papp&#39; s lively narration of the wellcrafted &quot;Life Aboard Eagle&quot; video, and concluding with inspiring music by Coast Guard Academy singers, the evening afforded tremendous visibility for Eagle and the Academy, to a large, prestigious and warm-hearted group. The generous gift to the Academy of William G. Muller&#39;s stunning painting &quot;New York Harbor Salutes America&#39;s Tall Ship Eagle&quot; is a wonderful expression of NMHS&#39; s commitment to our shared maritime heritage. I will cherish Sea History Press&#39;s new edition of The Skipper and the Eagle, a book which I remember with affection from my cadet days. Most of all, thank you for the opportunity to deliver the keynote address. The Coast Guard and its Academy are evolving rapidly, so chances to tell our story are all the more valuable. RADM D. H . TEESON, USCG New London, Connecticut

At the Annual Meeting on 25 April 1998 I was more than pleased to hear that NMHS would be republishing The Skipper and the Eagle. In the summer of 1958 our Sea Explorer Pandora, a double-ended ketch built in 1935, was tied up at Hobie&#39;s Dock at Mystic Seaport in Connecticut. My wife and I were sitting in the cockpit when Mystic&#39;s new youth program director, Gordon McGowan, seeing the Sea Scout flag, came down to look at Pandora. He told us how, afrer he retired as a Coast Guard captain, he played bridge with friends and reminisced about his rescue of Horst Wessel and her transformation into Eagle. His bridge friends encouraged him to write the book, and he was happy to autograph a copy of it for me. Long ago I lent my copy of The Skipper and the Eagle to a fri end who didn&#39;t return it. I&#39;ve been lookin g for another ever since. LEWJS G. KNAPP

Stratford, Connecticut I want to thank the Society for republishin g The Skipper and the Eagle. I have just SEA HISTORY 88, SPRING 1999