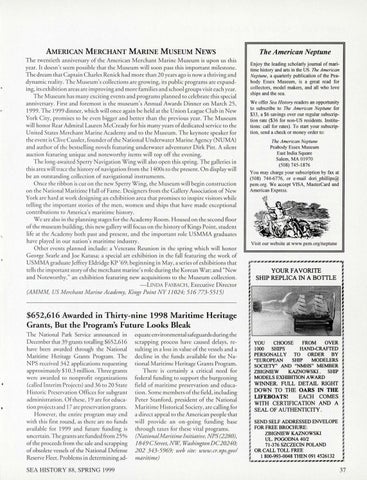 AMERICAN M ERCHANT MARINE MUSEUM N EWS The twentieth annive rsary of the American M erchant Marine Museum is upon us this year. It doesn&#39;t seem possible that the Museum will soo n pass this important milestone. The dream that Captain C harles Renick had more than 20 years ago is now a thriving and dynamic reali ty. The Museum&#39;s collections are growing, its public programs are expanding, its exhibition areas are improving and more families and school groups visit each year. The Museum has many exciting events and programs planned ro celebrate this special anniversary. First and foremost is the museum&#39;s Annual Awards Dinner on March 25 , 1999 . The 1999 dinner, which will once again be held at the Union League Club in New York City, promises to be even bigger and better than the previous year. The Museum will honor Rear Admiral Lauren McC ready for his many years of dedicated service to the United States Merchant Marine Academy and to the Museum. The keynote speaker for the event is C live C ussler, founder of the National Underwater Marine Agency (NUMA) and author of the bestselling novels featuring underwater adventurer Dirk Pitt. A silent auction featuring unique and notewo rthy items wi ll top off the evening. The long-awaited Sperry Navigation Wing will also open this spring. The gall eries in this area will trace the history of nav igation from the 1400s to the present. On display will be an outstan ding collection of navigational instruments. Once the ribbon is cut on the new Sperry Wing, the Museum will begin construction on the National Maritime Hall of Fame. Design ers from the Gal lery Association of New York are hard at wo rk designing an exhibition area that promises to inspire visitors whi le telling the important sto ries of the men, women and ships that have made exceptional co ntributions to America&#39;s maritime history. We are also in the planning stages for the Academy Room. Housed on the second Ao or of the museum buildin g, this new gallery will focus on the history of Kings Point, student life at the Academy both past and present, and the important ro le USMMA graduates have played in our nation &#39;s maritime industry. Other events planned include: a Veterans Reunion in the spring which will honor Geo rge Searle and Joe Katusa; a special art exhibition in the fall featuring the work of USMMA graduate Jeffrey Eldridge KP &#39;69; beginning in May, a series of exhibitions that tells the important story of the merchant marine&#39;s role during the Korean War; and &quot;New and Notewo rthy,&quot; an exhibition featuring new acquisitions to the Museum collection. -LINDA FASBACH, Executive Director (AMMM, US Merchant Marine Academy, Kings Point NY 11024; 516 773-5515)

The American Neptune Enj oy the leading scholarly journal of maritime history and arts in the US. The American Neptune , a quarterly publi cation of the Peabody Essex Museum, is a great read for coll ectors, model makers, and all who love sh ips and the sea. We offer Sea History readers an opportunity to subscribe to The American Neptune for $33, a $6 savings over our regul ar subscription rate ($36 for non-US residents. Institutions: call for rates) . To start your subscription, send a check or money order to:

$652,616 Awarded in Thirty-nine 1998 Maritime Heritage Grants, But the Program&#39;s Future Looks Bleak The National Park Service announced in December that 39 grants totalling $652,616 have been awarded through the National Maritime Heritage G rants Program. The NPS received 342 ap plications requesting approximately $10.3 million . Three grants were awa rded to nonprofit organizations (call ed Interim Projects) and 36 to 20 State Historic Preservation Offices for subgrant administration. Of these, 19 are for education projects and 17 are preservation grants. However, the entire program may end with th is first round, as there are no funds available for 1999 and future funding is uncertain. T he grants are funded from 25% of the proceeds from the sale and scrapping of obsolete vessels of the National Defense Reserve Fleet. Problems in determining ad-

equate environmental safeguards during the scrapping process have caused delays, resulting in a loss in value of the vessels and a decline in the funds ava ilable for the National Maritime H eritage Grants Program . There is certain ly a critical need for fed eral fundin g to support the burgeoning field of maritime preservation and education. Some members of the field, including Peter Stanford, president of the National Mari ti me Histo rical Sociery, are calling for a direct appeal to the Am eri ca n people that w ill provide an on-going funding base through taxes for these vital programs. (NationaLMaritime Initiative, NPS (2280), 1849 C Street, NW, Washington DC 20240; 202 343-5969; web site: www.cr.nps.gov/ maritime)