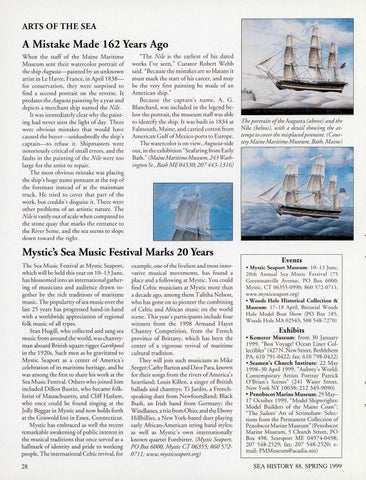 ARTS OF THE SEA

A Mistake Made 162 Years Ago When the staff of the M aine M aritime Museum sent their watercolor portrait of the ship Augusta-painted by an unknown artist in Le Havre, France, in April 1838for conservation , th ey were surprised to find a seco nd portrait on the reverse. It predates the Augusta painting by a year and depicts a merchant ship named the Nile. It was imm ediately clear why the painting had never seen the light of day. There were obvious mistakes that wo uld have caused the buye r- undoubtedly the ship&#39;s captain-to refuse it. Shipmas ters were notoriously critical of small errors, and the fau lts in the painting of the Nile were too large for the artist to repair. The most obvious mistake was placing the ship &#39;s huge name pennant at the top of the foremast instead of at the mainmast truck. H e tried to cover that part of the wo rk, but co uldn &#39;t disguise it. There were other problems of an artistic nature. The Nile is vastly out of scale when co mpared to the stone quay that marks the entrance to the River Seine, and the sea seems to slope down toward the right.

&quot;The Nile is the earliest of his dated works I&#39;ve seen,&quot; C urator Robert Webb said. &quot;Because the mistakes are so blatant it must mark the start of his career, and may be the ve ry first painting he made of an American ship. &quot; Because the cap tain &#39;s name, A. G . Blanchard, was included in the legend below the portrait, the museum staff was able to identify the ship . It was built in 1834 at Falmouth, Maine, and carried cotton from American Gulf of Mexico ports to Europe. T he watercolor is on view, Augusta-side out, in the exhibition &quot;Seafaring from Early Bath. &quot; (Maine Maritime Museum, 243 Washington St., BathME 04530; 207443-1316)

The portraits ofthe Augusta (above) and the Nile (below), with a detail showing the attempt to cover the misplacedpennant. (Courtesy Maine Maritime Museum, Bath, Maine)

Mystic&#39;s Sea Music Festival Marks 20 Years The Sea Music Festival at M ys tic Seaport, which will be held this year on 10-13 J une, has blossomed into an international gathering of musicians and audience drawn together by the rich traditions of maritime music. The popularity of sea music over the last 25 years has progressed hand-in-hand with a worldwide appreciation of regional folk music of all types. Stan Hugill, who collected and sang sea music from aro und the world, was chanteyman aboard British square rigger Garthpool in the 1920s. Such men as he gravitated to Mystic Seaport as a center of America&#39;s celebration of its maritime heritage, and he was among the first to share his work at the Sea Music Festival. Others who joined him included Dillon Bustin, who became folklorist of Massachusetts, and Cliff Haslam, who once could be found singing at the Jolly Beggar in Mystic and now holds forth at the Griswold Inn in Essex, Connecticut. M ys tic has embraced as well the recent remarkable awakening of public interest in the musical traditions that once served as a hallmark of identity and pride to working people. The international Celtic revival, for

example, one of the liveliest and most innovative musical movements, has found a place and a following at Mystic. You could find C eltic musicians at Mystic more than a decade ago, among them Talitha Nelson, who has gone on to pioneer the combining of C eltic and African music on the world scene. T his year&#39;s participants include four winners from the 1998 Armand Hayer Chantey Competition, from the French province of Brittany, which has been the center of a vigorous revival of maritime cultural tradition. They will join such musicians as Mike Seeger; Cathy Barton and Dave Para, known for their songs from the rivers of America&#39;s heartland; Louis Killen, a singer of British ballads and chanteys; Ti Jardin, a Frenchspeaking duet from Newfoundland; Black Bush, an Irish band from Germany; the W indlasses, a trio from Ohio; and the Ebony Hillbillies, a New York-based duet playing early African-American string band styles; as well as Mystic&#39;s own internationally known quartet Forebitter. (Mystic Seaport, PO Box 6000, Mystic CT 06355; 860 57207 11; www.mysticseaport.org)