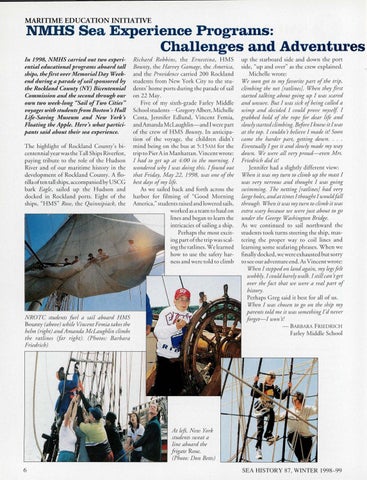 NMHS Sea Experience Programs: Challenges and Adventures In 1998, NMHS carried out two experiential educational programs aboard tall ships, the first over Memorial Day Weekend during a parade ofsail sponsored by the Rockland County (NY) Bicentennial Commission and the second through our own two week-long &quot;Sail of Two Cities&quot; voyages with students from Boston&#39;s Hull Life-Saving Museum and New York&#39;s Floating the Apple. Here &#39;s what participants said about their sea experience. T he hi ghlight of Rockland Coun ty&#39;s bicen tennial year was the Tall Ships Riverfes t, paying tribute to the role of the Hudso n Ri ve r and of our m aritime histo ry in the development of Rockland Coun ty. A flotilla of ten tall ships, acco mpanied by USCG bark Eagle, sailed up the Hudso n and docked in Rockland ports. Eight of the ships, &quot;H MS&quot; Rose, the Quinnipiack, the

Richard Robbins, the Ernestina, HMS Bounty, th e Harvey Gamage, the America, and the Providence carried 200 Rockland students from New Yor k City to the students&#39; hom e pons d uring the parade of sail o n 22 May. Five of my sixth-grade Fa rl ey M iddle School students- G regory Al bert, M ichelle Costa, Jennifer Edlun d, Vince nt Femia, and Amanda McLaughli n-a nd I we re part of the crew of H MS Bounty. In anti cipati o n of the voyage, the children didn &#39;t mind being on the bus at 5:1 5AM fo r the trip to Pier A in Manhattan. V incent wrote: I had to get up at 4:00 in the morning. I wondered why I was doing this. I found out that Friday, May 22, 1998, was one of the best days of my life. As we sailed back and fo rth across the harbo r fo r filming of &quot;Good M o rning Am erica,&quot; students raised and lowered sails, wo rked as a team co haul o n lines and began to learn the intricacies of sa iling a ship. Perhaps rhe mosr exciting part of the trip was scaling the ratlin es . We lea rn ed how co use the safety harness and were cold co climb

up the starboa rd side and down the po rt side, &quot;up and over&quot; as the crew explain ed . Mi chell e w ro te: We soon got to my favorite part of the trip, climbing the net [ratlines}. When they first started talking about going up I was scared and unsure. But I was sick of being called a wimp and decided I could prove myself I grabbed hold of the rope for dear life and slowly started climbing. Before I knew it I was at the top. I couldn&#39;t believe I made it! Soon came the harder part, getting down. . . . Eventually I got it and slowly made my way down. We were all very proud-even Mrs. Friedrich did it! Jennifer had a slightly different view: When it was my turn to climb up the mast I was very nervous and thought I was going swimming. The netting [ratlines} had very large holes, and at times I thought I wouldfall through. When it was my turn to climb it was extra scary because we were just about to go under the George Washington Bridge. As we co ntinued co sail north wa rd th e students roo k turns steering the ship, mastering th e p ro per way co coil lines and learnin g so me seafa rin g phrases. When we fin ally docked, we we re exhausted but sorry co see o ur adve nture end. As Vincent wro te: When J stepped on land again, my legs felt wobbly. I could barely walk. I still can&#39;t get over the fact that we were a real part of history. Perh aps G reg said it best for all of us. When I was chosen to go on the ship my parents told me it was something I &#39;d never forget-! won&#39;t! -

6 NMHS MARITIME EDUCATION INITIATIVE. NMHS Sea Experience Programs: Challenges and Adventures on the Water Life at Sea Is the Teacher, by Alix T Thorne • 11 THE CAPE HORN ROAD, XVII. America Begins to Change the Atlantic World, by Peter Stanford • 18 SHIP OF THE ISSUE. The Brig Pilgrim: The Old and the New, by Capt. Raymond Wallace • 22 "In thy map securely saile," by Alice Hudson • 28 MARINE ART. The Sloop Experiment Leads the Hudson out into the Wider World, by L. F Tantillo • 34 USS Kearny and USS Reuben James: Early Casualties of the Undeclared Naval War, by William H. Langenberg •