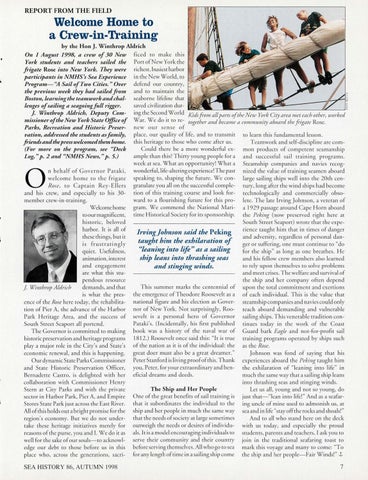 REPORT FROM THE FIELD

Welcome Home to a Crew-in-Training by the Hon J. Winthrop Aldrich On 1 August 1998, a crew of 30 New ficed to make this York students and teachers sailed the Port ofN ew York the frigate Rose into New York. They were richest, busiest harbor participants in NMHS&#39;s Sea Experience in the New World, to Program- &quot;A Sail of Two Cities.&quot; Over defend our country, the previous week they had sailed from and to maintain the Boston, learning the teamwork and chal- seaborn e lifeline char lenges ofsailing a seagoing full rigger. saved civilization durJ Winthrop Aldrich, Deputy Com- ing the Second World Kids from allparts ofthe New York City area met each other, wor/ud missioner ofthe New York State Office of War. We do it to re- together and became a community aboard the frigate Rose. Parks, Recreation and Historic Preser- new o ur se n se of vation, addressedthestudentsasfamily, pl ace, our qualiry of life, and to transmit to learn rhis fundamental lesso n. friendsandthepresswelcomedthemhome. this heritage to those who co me after us. Teamwo rk and self-disciplin e are com(For more on the program, see &quot;Deck Co uld there be a more wo nderful ex- mon products of competent seamanship Log, &quot;p. 2 and &quot;NMHS News,&quot; p. 5.) ample rhan rhis? Thirryyoung peop le for a and successful sail trainin g programs.

n be half of Governor Pataki, welcome home to th e frig ate Rose, to Captain Rey-E ll e rs and his crew, and especially to his 30member crew- in-training. Welcome home to our magnificent, histori c, beloved harbor. Ir is all of rhese things, but it is frustrati n g ly quiet. Usefulness, animation, imerest and engagem e n r are what rhis stupendous reso urce demands, and that j. Winthrop Aldrich is what the presence of th e Rose here today, the rehabil itation of Pier A, the advance of the H arbor Park H eritage Area, and the success of So uth Street Seaport all portend. T he Governor is committed to making historic preservation and heritage programs play a major role in the Ciry&#39;s and State&#39;s eco nomic renewal, and this is happe nin g. Our dynamic State Parks Commissioner and State Histo ric Preservation Officer, Bern adette Castro, is delighted with her co llaboration with Commissioner H enry Stern at Ciry Parks and with the private sector in Harbor Park, Pier A, and E mpire Stores State Park just across rhe East River. All of this holds out a bright promise for the region&#39;s economy. Bur we do not undertake these heritage initiatives merely for reasons of the purse, yo u and I. We do ir as well for the sake of our so uls-to acknowledge our debt ro those before us in rhis place who, across the generations, sacri-

week at sea. What an opportuniry! What a wonderful, life-alteringexperience!The past speaking to, shaping the future. We co ngratulate yo u all on the successful co mpletion of this training course and look forward to a fl ourishing future for this program. We commend the National Maritime Historical Sociery for its sponsorship .

Irving Johnson said the Peking taught him the exhilaration of &quot;leaning into life&quot; as a sailing ship leans into thrashing seas and stinging winds. This summer marks the centenni al of rhe em ergence ofTheodore Roosevel t as a national figure and his election as Governor of New York. Not surprisingly, Roosevelt is a person al h ero of Gove rnor Paraki&#39;s. (Incidentally, hi s first published book was a history of the naval war of 1812.) Roosevelt once sa id this: &quot;It is true of the nation as it is of th e individual: the great doer must also be a great dream er.&quot; Peter Stanford is living proofof this. Thank yo u, Peter, for yo ur extraordinary and beneficial dream s and deeds.

The Ship and Her People One of the great benefits of sail training is that it subordinates the individual to the ship and her people in much the same way that the needs of sociery at large sometimes o utweigh the needs or desi res of individuals. It is a model enco uraging individuals ro serve their communiry and their country before serving themselves. Al l who go ro sea for any length of time in a sa iling ship come

Steamship companies an d nav ies recognized the value of training seamen aboard large sailing ships well into the 20th century, long after the wind ships had become technological ly and commercially obsolete. The late Irving Johnson, a veteran of a 1929 passage around Cape Horn aboard the Peking (now preserved ri ght here at South Street Seaport) wrote that the experi ence taught him that in times of dan ger and adversiry, regard less of personal danger or suffering, one must continue to &quot;do for the ship &quot; as long as on e breathes. He and his fellow crew members also learned to rely upon themselves to solve prob lems and meet crises. The welfare and survival of th e ship and her co mpany often depend upon the total commitment and exertions of each individual. This is the value that steamship co mpanies and navies could on ly teach aboard dem anding and vulnerable sailing ships. This ve nerable tradition continues roday in the wo rk of the Coast Guard bark Eagle and not-for-profit sail training programs operated by ships such as the Rose. John so n was fond of saying that his experiences aboard the Peking taught him the exhilaration of &quot;lea nin g into life&quot; in much the same way that a sai lin g ship leans into thrashing seas and stinging winds. Let us all , yo ung and not so young, do just that-&quot; lean imo life! &quot; And as a seafaring uncle of min e used to admonish us, at sea and in life &quot;stay off the rocks and shoals!&quot; And to all who stand here on the deck with us today, and especially the proud students, parents and teachers, I ask you to join in rhe trad itional seafaring toas t to mar k this voyage and many ro come: &quot;To the ship and her peop le-Fair Winds!&quot;,!,