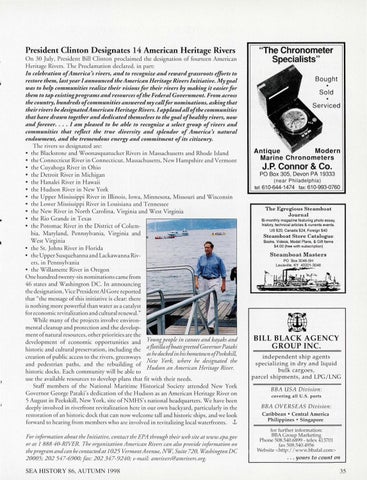 President Clinton Designates 14 American Heritage Rivers On 30 July, President Bill Clinton proclaimed the designation of fourteen American Heritage Rivers. The Proclamation declared, in part: In celebration ofAmerica's rivers, and to recognize and reward grassroots efforts to restore them, last year I announced the American Heritage Rivers Initiative. My goal was to help communities realize their visions for their rivers by making it easier for them to tap existingprograms and resources ofthe Federal Government. From across the country, hundreds ofcommunities answered my callfor nominations, asking that their rivers be designatedAmerican Heritage Rivers. I applaud all ofthe communities that have drawn together and dedicated themselves to the goal ofhealthy rivers, now and forever . ... I am pleased to be able to recognize a select group of rivers and communities that reflect the true diversity and splendor of America's natural endowment, and the tremendous energy and commitment of its citizenry. The rivers so designated are: • the Blackstone and Woonasquatucket Rivers in Massachusetts and Rhode Island • the Co nnecticut River in Co nnecticut, Massachusetts, New Hampshire and Vermont • the C uyahoga River in Ohio • the Detroit River in Michigan • the Han alei River in Hawaii • the Hudson River in New York • the Upper Mississippi River in Illinois, Iowa, Minneso ta, Missouri and Wisco nsin • the Lower Mississippi River in Louisiana and T ennessee • the New River in North Carolin a, Virginia and West V irgin ia • the Rio Grande in Texas • the Potomac River in the District of Columbi a, Maryland, Pennsylvania, Virginia and ~G. ~ West Virginia • the St. Jo hns River in Florida • the Upper Susquehanna and Lackawanna Rivers, in Pennsylvania the Wi llamette River in Oregon One hundred rwenry-six nominatio ns came from 46 states and Washington DC. In announcing the designation, Vice Pres ident Al Gore reported that "the message of this initiative is clear: there is nothing more powerful than water as a catalyst for economic revitalization and cultural renewal. " Wh il e many of th e proj ects involve environmental cl eanup and protection and the development of natural resources, other priori ti es are the development of economi c opportunities and Young people in canoes and kayaks and historic and cultural preservatio n, includin g th e aflotilla ofboatsgreeted Governor Pataki as he docked in his hometown ofPeekskill, creation of public access to the ri ve rs, gree nways New York, where he designated the and pedestrian paths, and the rebuilding of Hudson an American Heritage River. hi storic docks. Each co mmuniry will be able to use th e availab le resources to develop plans that fir with their needs. Staff members of the National Maritime H isto rical Sociery attended New York Governor George Pataki 's dedication of the Hudson as an American Heritage River on 5 August in Peekskill, New York, site ofNMHS's national headquarters. W e have been deeply involved in riverfront revitalization here in our own bac kyard, particularly in the restoration of an histo ric dock that ca n now welco me ra il and histo ric ships, and we look forward to hearin g from members who are involved in revitalizing local waterfronts. ,t

7 REPORT FROM THE FIELD. Welcoming Home a Crew-in-Training, by the Hon. J. Winthrop Aldrich • 8 THE CAPE HORN ROAD, XVI. Columbia, the Gem o...

7 REPORT FROM THE FIELD. Welcoming Home a Crew-in-Training, by the Hon. J. Winthrop Aldrich • 8 THE CAPE HORN ROAD, XVI. Columbia, the Gem o...