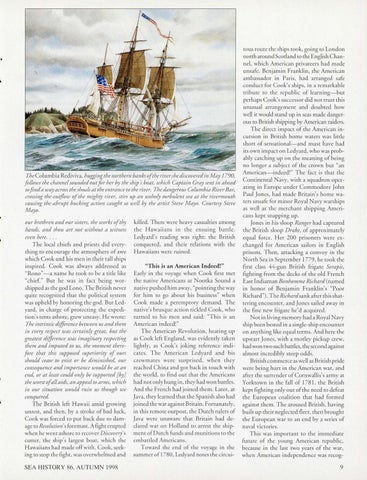 The Columbi a Redi viva, hugging the northern banks ofthe river she discovered in May 1790, follows the channel sounded out for her by the ships boat, which Captain Gray sent in ahead to find a way across the shoals at the entrance to the river. The dangerous Columbia River Bar, crossing the outflow of the mighty river, stirs up an unho!J turbulent sea at the rivermouth causing the abrupt bucking action caught so well by the artist Steve May o. Courtesy Steve Mayo. our brethren and our sisters, the works ofthy hands, and thou art not without a witness even here. .. . The local chiefs and priests did eve rything to encourage the atmosphere of awe whi ch Cook and his men in their tall ships inspired. Cook was always addressed as &quot;Rono&quot;-a name he too k to be a tide li ke &quot;chief. &quot; But he was in fac t being wo rshipped as the god Lon o. T he British never quite recognized that the political system was upheld by honoring the god. But Ledyard, in charge of protecting the expedition &#39;s tents ashore, grew uneasy. H e wro te: The intrinsic difference between us and them in every respect was certain!J great, but the greatest difference was imaginary respecting them and imputed to us, the moment therefo re that this supp osed superiority of ours should cease to exist or be diminished, our consequence and importance would be at an end, or at least could on!J be supported [by] the worst ofall aids, an appeal to arms, which in our situation would ruin us though we conquered. The British left H awaii amid growing unrest, and then, by a stro ke of bad luck, Cook was forced to put back due to damage to Resolution&#39;s fo remas t. A fi ght erup ted when he went asho re to recover D iscovery&#39;s cutter, the ship &#39;s largest boat, which the H awaiians had m ade off with. Cook, seeking to stop the fight, was overwhelmed and

&quot;This is an American Indeed!&quot; Early in the voyage when C ook first met the nati ve Americans at Noo tka Sound a native pushed him away, &quot;pointing the way for him to go about his business&quot; when C ook made a peremp tory dem and. T he native&#39;s brusque actio n tickled Cook, who turned to his men and said : &quot;This is an Ameri can indeed !&quot; The American Revolutio n, heating up as Cook left England, was evidently taken lightly, as Cook&#39;s joking reference indicates. Th e Am eri ca n Ledyard and his crewm ates we re sur pri sed , wh en they reached C hina and got back in touch with the wo rld, to fi nd ou t that the Americans had not o nl y hung in , they had won battles. And the F rench had joined them . Later, at Java, th ey learned that the Spanish also had joined th e wa r aga inst Bri rain . Fortunately, in this rem ote o utpost, the Dutch rulers of Java we re unawa re that Britain had declared wa r on H olland to arrest the shipment of Du rch funds and munitions to the embattled Ame ri cans. Toward the end of the voyage in the summ er of 1780 , Ledyard notes th e circui -

mus route the ships cook, going to London no rth around Scotland to the English Channel, which Am erica n pri va teers had made unsafe. Benj amin Fra nklin, the Ameri can ambassado r in Paris, had arranged safe conduct fo r Cook&#39;s ships, in a remarkable tribute to the re public of learning- but perhaps Cook&#39;s successo r did not trust this unusual arrangement and doubted ho w well it would stand up in seas made dangerous to British shipping by American raiders. T he direct impact of the American incursion in British home waters was littl e short of sensatio nal-and must have had its own impact o n Ledya rd, who was probably catchin g up on the meaning of being no longe r a subject of the crown but &quot;an A meri ca n- indeed! &quot; The fact is that the Continental Navy, with a squadron operating in Europe under C ommodore John Paul Jon es , had made Britain&#39;s home waters un safe for minor Royal Navy warships as well as the merchant shipping Am erica ns kept snapping up . Jones in hi s sloop Ranger had captured the British sloop D rake, of approxim ately equal fo rce. H er 200 prisoners we re exchanged fo r American sailors in English priso ns. Then, attacking a convoy in the No rth Sea in September 1779, he took th e first cl ass 44-gun British fri gate Serapis, fightin g from the decks of the old French East Indiaman Bonhomme Richard (named in honor of Benjamin Franklin &#39;s &quot;Poor Richard&quot;). The Richardsank after this shatterin g encounter, and Jones sailed away in the fin e new fri gate he&#39;d acquired . No t in li ving m emory had a Royal Navy ship been bested in a single-ship encoumer o n anything like equal terms. And here the upstart Jo nes, with a motley pickup crew, had wo n two such battles, the seco nd against almost incredibly steep odds. British commerce as well as British pride we re being hurt in the American war, and afte r the surrender of C ornwallis&#39;s arm y at Yo rktow n in the fall of 178 1, the British kept fighting only out of the need to defeat th e European coalition that had fo rmed aga inst them. T he aroused British, having built up their neglected fl eet, th en brought the European war to an end by a series of naval victories. T his was important to th e immediate future of the young Ameri can repub lic, because in the las t rwo yea rs of the war, when American independence was recog-