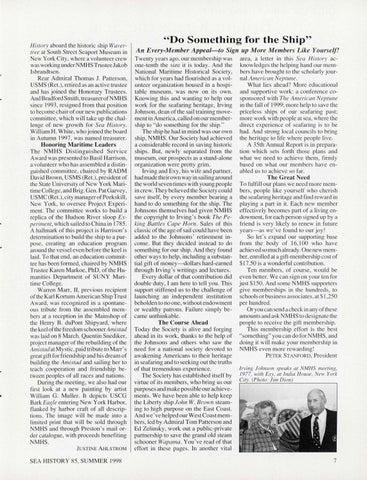 History aboard the hi storic ship Wavertree at South Street Seaport Museum in New York City, where a volunteer crew was working under NMHS Trustee Jakob Isbrandtsen. Rear Admiral Thomas J. Patterson, USMS (Ret.), retired as an active trustee and has joined the Honorary Trustees. And Bradford Smith, treasurerofNMHS since 1993, res igned from that position to become chair of our new publications comm ittee, which will take up the challenge of new growth for Sea History. William H. White, who joined the board in Autumn 1997, was named treasurer. Honoring Maritime Leaders The NM HS Di stin g uished Service Award was presented to Basil Harrison, a vol unteer who has assem bled a distingui shed committee, chaired by RADM David Brown, USMS (Ret.), president of the State Un iversity of New York Maritime College, and Brig. Gen. Pat Garvey, USMC (Ret.), city managerof Peekskill , New York , to oversee Project Experiment. The committee works to build a replica of the Hudson Ri ver sloop Experiment, whi ch sa iled to China in 1785. A hallmark of this project is Harrison &#39;s determination to build the ship to a purpose, creating an ed ucation program arou nd the vessel even before the keel is laid. To that end, an education committee has been fo rmed, chaired by NMHS Trustee Karen Markoe, PhD, of the Humanities Department of SUNY Maritime College. Warren Man, II, previous recipient of the Karl Kortum American Ship Trust Award , was recognized in a spontaneous tribute from the assembled members at a reception in the Mainshop of the Henry B. duPont Shipyard, where the keel of the freedom schooner Amistad was laid on 8 March. Quentin Snediker, project manager of the rebuilding of the AmistadatMystic, paid tribute toMarr&#39;s great gift for fri endship and hi s dream of bui lding the Amistad and sailing her to teach cooperation and friends hip between peoples of all races and nati ons. During the meeting, we also had our first look at a new painting by artist William G. Muller. It depicts USCG Bark Eagle entering New York Harbor, flanked by harbor craft of all descriptions. The image will be made into a limited print that will be sold through NMHS and thro ugh Preston &#39; s mail order catalogue, with proceeds benefiting NMHS . JUSTINE AHLSTROM SEA HISTORY 85 , SUMMER 1998

&quot;Do Something for the Ship&quot; An Every-Member Appeal-to Sign up More Members Like Yourself! Twenty years ago, our membership was one-tenth the size it is today. And the National Maritime Historical Society, which for years had flourished as a volunteer organization hou sed in a hospitable mu seum , was now on its own. Knowing thi s and wanting to help our work for the seafaring heritage, Irving Johnson , dean of the sai l training movement in America, called on our membership to &quot;do something fo r the ship .&quot; The ship he had in mind was our own ship, NMHS. Our Society had achieved a cons iderable record in saving hi storic ships. But, newly separated from the museum , our prospects as a stand-alone organization were pretty grim . Irving and Exy, his wife and partner, had made their own way in sailing around the world seven times with yo ung people in crew. They believed the Society could save itself, by every member bearing a hand to do something for the ship. The Johnsons themselves had given NMHS the copyright to Irving&#39;s book The Peking Battles Cape Horn. Sales of this cl ass ic of the age of sail could have been added to the Johnsons &#39; retirement income. But they decided instead to do something for our ship . And they fo und other ways to help, including a substantial gift of money-doll ars hard-earned through Irving &#39; s writings and lectures. Every dollar of that contributi on did double duty, I am here to tell yo u. This support stiffened us to the challenge of launching an independent institution beholden to no one, without endowment or wealthy patrons. Failure simply became unthinkable. The Course Ahead Today the Society is ali ve and forging ahead in its work, thanks to the help of the Johnsons and others who saw the need fo r a national soc iety devoted to awakening Americans to their heritage in seafaring and to seeking out the truths of that tremendous ex perience. The Society has establi shed itself by virtue of its members, who bring us our purposes and make possible our achievements. We have been able to help keep the Liberty ship John W. Brown steaming to high purpose on the East Coast. And we&#39;ve helped our West Coast members, led by Admiral Tom Patterson and Ed Zelinsky, work out a public-private partnership to save the grand old steam schooner Wapama. You &#39;ve read of that effort in these pages. In another vital

area, a letter in this Sea History acknowledges the helping hand our members have brought to the scholarly journal American Neptune. What lies ahead? More ed ucational and supportive work : a conference cosponsored with The American Neptune in the fall of 1999; more help to save the priceless sh ips of our seafaring past; more work with people at sea, where the direct experience of seafaring is to be had. And strong local counci ls to bring the heritage to life where people live. A 35th Ann ual Report is in preparation whi ch sets forth those plans and what we need to achieve them, firm ly based on what our members have enabled us to achieve so far. The Great Need To fulfill our plans we need more members, people like yourself who cherish the seafaring heritage and find reward in playing a part in it. Each new member effectively becomes part of a living endowment, for each person signed up by a friend is very li kely to renew in future years-as we &#39; ve fo und to our joy! So let&#39;s expand our suppo1ting base from the body of 16,100 who have achieved so much already. One new member, enrolled at a gift-membership cost of $ 17.50 is a wonderful contribution. Ten members, of course, would be even better. We can sign on your ten for just $150. And some NMHS supporters give memberships in the hundreds, to schoo ls or business associates , at $1 ,250 per hundred. Or you can send a check in any of these amo unts and ask NMHS to designate the people to receive the gift membership. This membership effort is the best &quot;something&quot; you can do for NMHS , and doing it wi ll make your membership in NMHS even more rewarding! PETER STANFORD, President Irving Johnson speaks at NMHS meeting, 1977, with Exy, at India House, New York City. (Photo: Jim Dion)