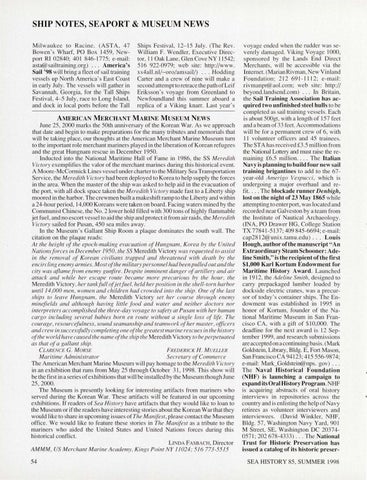 AMERICAN MER CHANT MARINE MUSEUM NEWS June 25, 2000 marks the 50th anni versary of the Korean War. As we approach that date and begin to make preparations for the many tributes and memorials that will be taking place, our thoughts at the American Merchant Marine Mu seum turn to the important role merchant mariners played in the liberation of Korean refugees and the great Hungnam rescue in December 1950. Inducted into the National Maritime Hall of Fame in 1986, the SS Meredith Victory exemplifies the valor of the merchant marines during thi s hi storical event. A Moore-McC01mick Lines vessel under charter to the Military Sea Transportation Service, the Meredith Victory had been deployed to Korea to help suppl y the forces in the area. When the master of the ship was asked to help aid in the evacuation of the port, with all dock space taken the Meredith Victory made fas t to a Liberty shi p moored in the harbor. The crewmen built a makeshift ramp to the Liberty and within a 24-hour period, 14,000 Koreans were taken on board . Facing waters mined by the Comm unist Chinese, the No. 2 lower hold filled with 300 tons of hi ghly flammable jet fuel , and no escort vessel to aid the ship and protect it from air raids, the Meredith Victory sailed for Pusan, 450 sea miles away. In the Museum &#39;s Gallant Ship Room a plaque dominates the south wall. The citation on the plaque reads: At the height of the epoch-making evacuation of Hu ngnam , Korea by the United Nations forces in December 1950, the SS Meredith Victory was requested to assist in the removal of Korean civilians trapped and threatened with death by the encircling enemy armies . Most ofthe militwy personnel had been pu Iled out and the city was aflame from enemy gunfire. Despite imminent dan ger of artillery and air attack and while her escape route became more precarious by the hour, the Meredith Victory, her tankful/ ofjet fuel , held her position in the shell-torn harbor until 14,000 men, women and children had crowded into the ship . One of the last ships to leave Hungnam, the Meredith Victory set her course through enemy minefields and although having little food and water and neither doctors nor interpreters accomplished the three-day voyage to safety at Pusan with her human cargo including several babies born en route without a single loss of life. The courage, resourcefulness , sound seamanship and teamwork of her master, officers and crew in successfully completing one ofthe greatest marine rescues in the history ofthe world have caused the name ofthe ship the Meredith Victory to be pe1petuated as that of a gallant ship. CLARENCE G. MORSE FREDERICK H . M UELLER Maritime Administrator Secretary of Commerce The American Merchant Marine Museum will pay homage to the Meredith Victory in an ex hibition that runs from May 25 through October 3 1, 1998. Thi s show will be the first in a series of exhibitions that will be installed by the Museum though June 25, 2000. The Museum is presentl y looking for interesting artifacts from mariners who served during the Korean War. These artifac ts will be featured in our upcoming exhibiti ons. If readers of Sea History have artifacts that they wou ld like to loan to the Mu seum or ifthe readers have interesti ng stories about the Korean War that they would like to share in upcom ing issues of The Manifest , please contact the Museum office. We would like to feature these stories in The Manifest as a tribute to the mariners who aided the United States and United Nations forces during this historical confl ict. LINDA f ASBACH, Director AMMM, US Merchant Marine Academy, Kings Point NY 11024; 516 773-5515 54

voyage ended when the rudder was severely damaged. Viking Voyage 1000, spon sored by the Lands End Direct Merchants, will be access ibl e via the Internet. (Marian Rivman, New Vinland Found ation ; 2 12 691 -1 11 2; e-mai l: rivmanpr@aol. com ; web site: http :// beyond.landsend .com) ... In Britain , the Sail Training Association has acquired two unfinished steel hulls to be completed as sail training vessels. Each is about 500gt, with a length of 157 feet and a beam of33 fee t. Accommodations will be for a permanent crew of 6, with 11 volunteer officers and 45 trainees. The STA has receivedÂŁ3 .5 million from the National Lottery and must raise the remai ning ÂŁ6.5 million .... The Italian Navy is planning to build four new sail training brigantines to add to the 67year-old Amerigo Vespucci, which is undergoing a major overhaul and refit. ... The blockade runner Denbigh, lost on the night of 23 May I865 while attempting to enter port, was located and recorded near Ga lveston by a team from the Institute of Nautical Archaeo logy. (I A, PO Drawer HG , College Station TX 7784 1-5 137; 409 845-6694; e-mai l: cap2812@unix.tamu.edu) ... Louis Hough , author of the manuscript &quot;An Extraordinary Steam Schooner: Adeline Smith,&quot; is the recipient of the first $I,OOO Karl Kortum Endowment for Maritime History Award . Launched in 1912, the Adeline Smith, designed to carry prepackaged lumber loaded by dockside electric cranes, was a precursor of today &#39;s container ships. The Endowment was established in 1995 in honor of Kortum , founder of the National Maritime Museum in San Francisco CA, with a gift of $ 10,000. The deadl ine for the next award is 12 September 1999, and research submi ssions are accepted on a continuing basis. (Mark Goldstein , Library, Bldg. E, Fort Mason , San Francisco CA 94123; 415 556-9874; e-ma il : Mark_Goldstein@nps. gov) ... The Naval Historical Foundation (NHF) is launching a campaign to expand its Oral History Program. NHF is acqu iri ng abstracts of oral hi story interviews in repositories across the country and is enli sting the help of Navy retirees as vol unteer interviewers and interviewees. (David Winkler, NHF, Bldg. 57, Washington avy Yard, 901 M Street, SE, Washington DC 203740571 ; 202 678-4333) ... The National Trust for Historic Preservation has issued a catalog of its historic preserSEA HISTORY 85 , SUMMER 1998