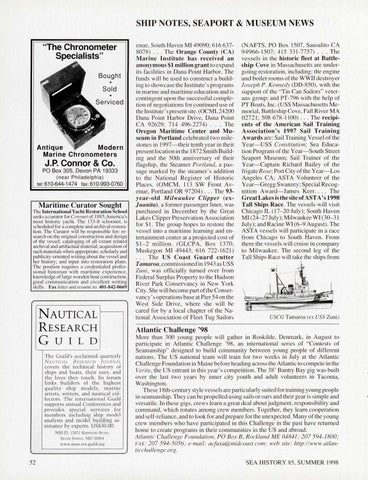 (NAFTS , PO Box 1507, Sausalito CA 94966-1507; 415 331-7757) .. . The vessels in the historic fleet at Battlesh ip Cove in Massachusetts are undergoing restoration , including: the engine and boiler rooms of the WWII destroyer Joseph P. Kennedy (DD-850), with the support of the &quot;Tin Can Sailors&quot; veterans group; and PT-796 with the help of PT Boats, Inc. (USS Massachusetts Memorial, Battleship Cove, Fall River MA 02721; 508 678-1100) ... The recipients of the American Sail Training Association &#39;s 1997 Sail Training Awards are: Sail Training Vessel of the Year-USS Constitution ; Sea Education Program of the Year-South Street Seaport Museum; Sail Trainer of the Year-Captain Richard Bailey of the frigate Rose; Port City of the Year- Los Angeles CA; ASTA Volunteer of the Year-Gregg Swanzey; Special Recognition Award-James Kerr. ... The Great Lakes is the site of AST A&#39;s 1998 Tall Ships Race. The vessels wi ll visit Chicago IL ( 17- 20 July); South Haven Ml(24-27 July); Milwaukee WI (30- 3 J July); and Racine WI (6-9 August). The AST A vessels wi ll participate in a race from Chicago to South Haven. From there the vessels will cruise in company to Milwaukee. The second leg of the Tall Ships Race will take the ships from

enue, South Haven MI 49090; 616 6378078) ... The Orange County (CA) Marine Institute has received an anonymous $1 million grant to ex pand its facilities in Dana Point Harbor. The funds will be used to construct a building to showcase the Institute &#39; s program s in marine and maritime education and is contingent upon the successful comp letion of negotiations for continued use of the Institute &#39;s present site. (OCMI, 24200 Dana Point Harbor Drive, Dana Point CA 92629; 714 496-2274) .. . The Oregon Maritime Center and Museum in Portland celebrated two mil estones in 1997- theiT tenth year in their present location in the 1872SmithBuilding and the 50th anniversary of their flagship, the Steamer Portland, a passage marked by the steamer &#39;s addition to the National Regi ster of Hi storic Places. (OMCM, 113 SW Front Avenue, Portland OR 97204) .. . The 93year-old Milwaukee Clipper (exJuanita) , a former passenger liner, was purchased in December by the Great Lakes Clipper Preservation Associat ion for $ 1. The group hopes to restore the vessel into a maritime learning and entertainment center at a projected cost of $ 1-2 million. (GLCPA , Box 1370, Muskegon MI 49443; 616 722-1621) ... The US Coast Guard cutter Tamaroa , commissioned in 1943 as USS Zuni , was officially turned over from Federal Surplus Property to the Hudson River Park Conservancy in New York City. She will become part of the Conservancy &#39; s operations base at Pier 54 on the West Side Drive, where she will be cared for by a local chapter of the National Association of Fleet Tug Sailors

More than 300 young people will gather in Roskilde, Denmark, in August to participate in Atlantic Cha ll enge &#39;98, an international series of &quot;Contests of Seamanship&quot; designed to build comm unity between young people of different nations. The US national team will train for two weeks in July at the Atlantic Chailenge Foundation in Maine before heading across the Atlantic to compete in the Verite, the US entrant in thi s year&#39;s competition. The 38 &#39; Bantry Bay gig was built over the last two years by inner city youth and adult volunteers in Tacoma, Washington. These 18th-century styl e vessels are particul arl y suited fortraining young people in seamanship. They can be propelled using sails oroars and their gear is simpl e and versati le. In these gigs, crews learn a great dea l about judgment, responsibility and command, which rotates among crew members. Together, they learn cooperation and self-reliance, and to look for and prepare for the unexpected. Many of the young crew members who have participated in this Challenge in the past have returned home to create programs in their communities in the US and abroad. Atlantic Challenge Foundation, PO Box B, Rockland ME 04841 ; 207 594-1800; FAX: 207 594-5056; e-mail: acfitsa@midcoast. com; web site: http:// www.atlanticchallenge.org. SEA HISTORY 85 , SUMMER 1998