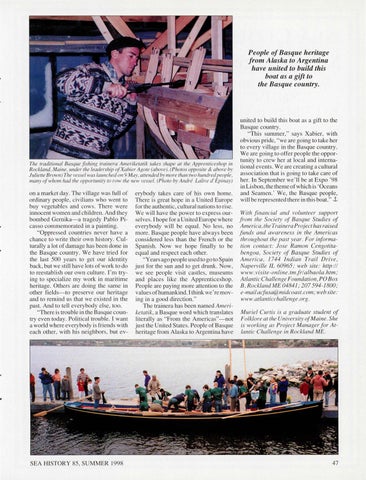 People of Basque heritage from Alaska to Argentina have united to build this boat as a gift to the Basque country.

The traditional Basque fishin g trainera Ameriketatik takes shape at the Apprenticeshop in Rockland, Maine, under the leadership ofXabier Agote (above). (Photos opposite &amp; above by J uliette Brown) The vessel was launched on 9 May, attended by more than two hundred people, many of whom had the opportunity to row the new vessel. (Photo by Andre Lalive d&#39; Epinay)

on a market day. The village was full of ordinary people, civilians who went to buy vegetables and cows. There were innocent women and chil dren. And they bombed Gernika-a tragedy Pab lo Picasso commemorated in a painting. &quot;Oppressed countries never have a chance to write their own hi story. C ultu rally a lot of damage has been done in the Basque country. We have tried for the last 500 years to get our identity back, but we still have lots of work to do to reestablish our own culture . I&#39; m trying to specialize my work in maritime heri tage . Others are doing the same in other fi elds- to preserve our heri tage and to remind us that we existed in the pas t. And to tell everybody else, too. &quot;There is trouble in the Basque country even today. Political tro uble. I want a world where everybody is fri ends w ith each other, with his neighbors, bu t ev-

erybody takes care of hi s own home. There is great hope in a Un ited Europe for the authenti c, cul tural nations to rise. We will have the power to express ourselves. I hope fo r a United Europe where everybody will be equal. No less, no more. Basque peopl e have always been considered less than the French or the Spanish. Now we hope finally to be equal and respect each other. &quot;Years ago people used to go to Spain just for the sun and to get drunk. Now, we see people vis it castles , museums and places like the Apprenti ceshop. People are pay ing more attention to the values of humankind . I thin k we &#39; re moving in a good directi on.&quot; The trainera has been named Ameriketatik, a Basque word whi ch translates literall y as &quot;From the Americas&quot;- not just the United States. People of Basque heritage from Alaska to Argentina have

united to build this boat as a gift to the Basque country. &quot;Thi s summer,&quot; says Xabier, with obvious pride, &quot; we are going to take her to every vill age in the Basque country. We are go ing to offer people the opportunity to crew her at local and internati onal events. We are creating a cultural assoc iation that is going to take care of her. In September we&#39; ll be at Expo &#39;98 in L isbon, the theme of which is &#39; Oceans and Seamen.&#39; We, the Basque people, will be represented there in thi s boat. &quot; 1,

With financial and volunteer support from the Society of Basque Studies of America, the Trainera Project has raised funds and awareness in the Americas throughout the past year. For information contact: Jose Ramon Cengotitabengoa, Society of Basque Studies of America , 1744 Indian Trail Drive , Naperville IL 60965; web site: http :// www .visite-on/ine .tmjrl albao la.htm; Atlantic Challenge Foundation, PO Box B, Rockland ME 04841; 207 594-1800; e-mail acfusa@midcoast.com; web site: www.atlanticchallenge.org. Muriel Curtis is a graduate student of Fo lklore at the University of Maine. She is working as Project Manager for Atlantic Challenge in Rockland ME.