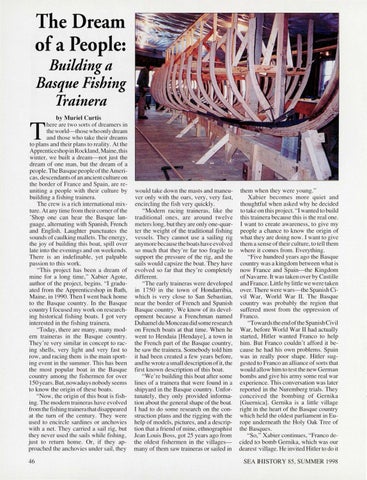 of a People: Building a Basque Fishing Trainera by Muriel Curtis here are two sorts of dreamers in the world- those who only dream and those who take their dreams to pl ans and their pl ans to reality. At the Apprenticeshop in Rockland , Maine, this winter, we built a dream- not just the dream of one man , but the dream of a people. The Basque peopl e of the Americas, descendants of an ancient culture on the border of France and Spain , are reuniting a people with their culture by build ing a fishing trainera. The crew is a rich internati onal mi xture. At any time from their corner of the &#39;Shop one can hear the Basque language, alternating with Spanish, French and English. Laughter punctuates the sounds of caulking mallets. The energy, the joy of building this boat, spill over late into the evenings and on weekends. There is an indefinable, yet palpabl e pass ion to this work. &quot;This project has been a dream of mine for a long time,&quot; Xabier Agote, author of the project, begins. &quot;I graduated from the Apprenti ceshop in Bath , Maine, in 1990. Then I went back home to the Basque country. In the Basque country I focused my work on researching historical fi shing boats. I got very interested in the fi shing trainera. &quot;Today , there are many, many modern traineras in the Basque country. They &#39; re very similar in concept to racing shell s, very light and very fas t to row, and rac ing them is the main sporting event in the summer. This has been the most popul ar boat in the Basque country among the fi shennen fo r over 150 years. But, nowadays nobody seems to know the origin of these boats. &quot;Now, the origin of this boat is fi shing. The modern traineras have evolved from the fi shing t:rainera that disappeared at the turn of the century. They were used to encircle sardines or anchov ies with a net. They carried a sail ri g, but they never used the sails while fi shing , just to return home. Or, if they approached the anchov ies under sa il , they

would take do wn the masts and maneuver only with the oars, very, very fas t, encircling the fish very quickly. &quot;Modern racing traineras, like the traditi onal ones , a re around twelve meters long, but they are only one-quarter the weight of the trad itional fi shing vessels. They cannot use a sailing rig anymore because the boats have evolved so much that they&#39; re far too fragile to support the pressure of the ri g, and the sails would capsize the boat. They have evolved so far that they &#39; re completely different. &quot;The early traineras were developed in 1750 in the town of Hondarribia, which is very close to San Sebastian , near the border of French and Spanish Basque country. We know of its development because a Frenchman named Duhamel du Monceau did some research on French boats at that time. When he went to Hendaia [Hendaye], a town in the French part of the Basque country, he saw the trainera. Somebody told him it had been created a few years before, and he wrote a small description of it, the first known description of this boat. &quot;We&#39; re building this boat after some lines of a trainera that were found in a shipyard in the Basque country. Unfortunately, they only provided infonnation about the general shape of the boat. I had to do some research on the construction plans and the rigging with the help of models, pi ctures, and a description that a fri end of mine, ethnographist Jean Loui s Boss, got 25 years ago from the oldest fis hermen in the villagesmany of them saw tra ineras or sailed in

them when they were young. &quot; Xa bie r becomes more qui e t and thoughtful when asked why he decided to take on this project. &quot;I wanted to build this trainera because this is the real one. I want to create awareness, to give my people a chance to know the origin of what they are doing now. I want to give them a sense of their culture, to tel 1them where it comes fro m. Everything. &quot;Five hundred years ago the Basque country was a kingdom between what is now France and Spain- the Kingdom of avarre. It was taken over by Castille and France. Little by li ttle we were taken over. There were wars-the Spanish Civil War, World War II. The Basque country was pro bably the region that suffered most fro m the oppress ion of Franco. &quot;Towards theend of the Spanish Civil War, before World War II had actuall y started, Hitler wanted Franco to help him . But Franco couldn &#39; t afford it because he had his own probl ems. Spain was in really poor shape. Hitler suggested to F ranco an alliance of sorts that would al low him to test the new German bombs and give hi s am1y some real war experience. This conversation was later reported in the Nuremberg trials. They conceived the bombin g of Gern ika [Guernica]. Gernika is a little vill age right in the heart of the Basque country which held the oldest parliament in Europe unde rneath the Holy Oak Tree of the Basques. &quot;So,&quot; Xabier continues, &quot;Franco decided t0&gt; bomb Gernika, which was our dearest &#39;v illage. He invited Hitler to do it SEA JHISTORY 85, SUMMER 1998