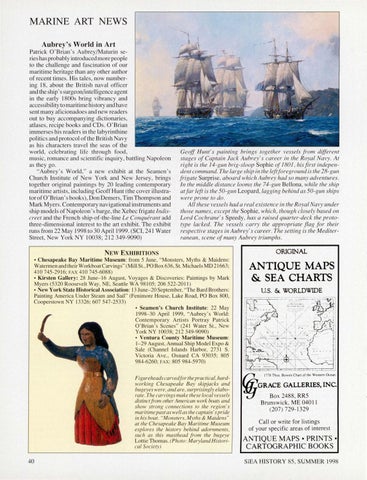 Geoff Hunt&#39; s painting brings together vessels from different stages of Captain Jack Aubrey&#39;s career in the Royal Navy . At right is the 14-gun brig-sloop Sophi e of 1801, his first independent command. The large ship in the leftforegrou nd is the 28-gun frigate Surprise, aboard which Aubrey had so many adventures. In the middle distance looms the 74-gun Bellona, while the ship at far left is the 50-gun Leopard , lagging behind as 50-gun ships were prone to do. All these vessels had a real existence in the Royal Navy under those names, except the Sophie, which, though closely based on Lord Cochrane&#39; s Speedy, has a raised quarter-deck the prototype lacked. The vessels carry the appropriate flag for their respective stages in Aubrey&#39;s career. The setting is the M editerranean, scene of many Aubrey triumphs.