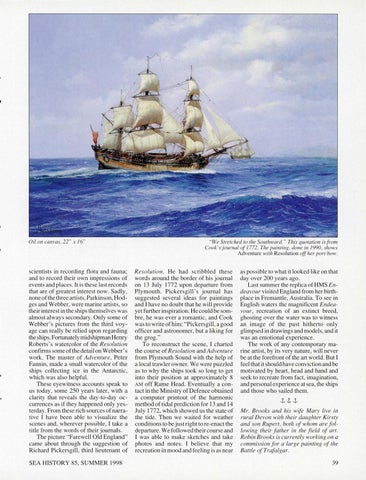 scienti sts in recording flora and fa un a; and to record their own impress ions of events and places. It is these last record s that are of greatest interest now . Sadly, none of the three artists, Parkin son, Hodges and Webber, were marine arti sts, so their interest in the ships themselves was almost always secondary . Only some of Webber&#39;s pictures from the third voyage can really be relied upon regarding the ships. Fortunately midshipman Henry Roberts&#39;s watercolor of the Resolution confirms some of the detail on Webbe r&#39;s work. The master of Adventure, Peter Fannin, made a small watercolor of the ships collecting ice in the Antarctic, which was al so helpful. These eyewitness accounts speak to us today , some 250 years later, with a clarity that reveals the day-to-day occuITences as if they happened only yesterday. From these rich sources of narrative I have been able to visualize the scenes and, wherever poss ible, I take a title from the words of theiJÂˇ journal . The picture &quot;Farewell Old England&quot; came about through the suggestion of Ri chard Pi ckersg ill , third lieutenant of SEA HISTORY 85 , SUMMER 1998

&quot;We Stretched to the South ward. &quot; This quotation is from Cook&#39; sjournal of 1772. The painting, done in 1990, shows A dventure with Resolution off her port bow.

Resolution . He had scribbled these words around the border of hi s journal on 13 July 1772 upon departure from Plymouth. Pickersg i 11 &#39; s journal has suggested several ideas for paintings and I have no doubt that he will provide yet further inspiration. He could besombre, he was ever a romantic , and Cook was to write of him: &quot;Pickersgill , a good officer and astronomer, but a liking for the grog. &quot; To reconstruct the scene, I charted the course of Resolution and Adventure from Plymouth Sound with the help of a local trawler owner. We were puzzled as to w)ly the ships took so long to get into their position at approximately 8 AM off Rame Head. Eventually a contact in the Ministry of Defence obtained a computer printout of the harmonic method of tidal prediction for 13 and 14 Jul y 1772, which showed us the state of the tide. Then we waited for weather conditions to be just ri ght to re-enact the departure. We followed their course and I was able to make sketches and take photos and notes. I believe that my recreation in mood and feeling is as near

as poss ible to what it looked like on that day over 200 years ago. Last summer the replica of HMS Endeavour visited England from her birthplace in Fremantle, Australia. To see in English waters the magnificent Endeavour, recreation of an extinct breed, ghosting over the water was to witness an image of the past hitherto only glimpsed in drawings and models, and it was an emotional experience. The work of any contemporary marine artist, by its very nature, will never be at the forefront of the art world. But I feel that it should have conviction and be motivated by heart, head and hand and seek to recreate from fact, imagination, and personal experience at sea, the ships and those who sailed them . Mr . Brooks and his wife Mary live in rural Devon with their daughter Kirsty and son Rupert, both of whom are following their father in the field of art. Robin Brooks is currently working on a commission for a large painting of the Battle of Trafalgar.