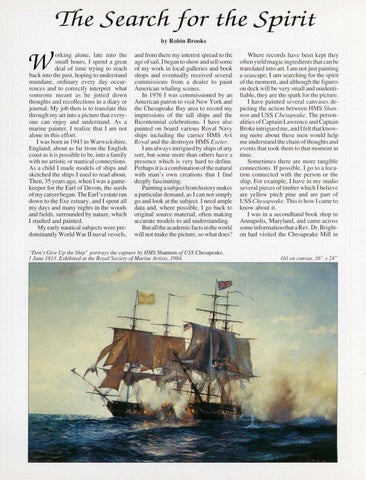 &#39;Ilie Search for t he Spirit by Robin Brooks

orking alone, late into the small hours, I spend a great deal of time trying to reach back into the past, hoping to understand mundane, ordinary every day occurrences and to correctly interpret what someo ne meant as he j otted down thoughts and recollections in a diary or journal. My job then is to tran slate thi s through my art into a picture that everyone can enj oy and understand . As a marine painter, I realize that I am not alone in thi s effort. I was born in 1943 in Warwickshire, England , about as far from the English coast as it is possible to be, into a family with no arti stic or nautical connections. As a child I made models of ships and sketched the ships I used to read about. Then, 35 years ago, when I was a gamekeeper fo r the Earl of Devon, the seeds of my career began. The Earl &#39;s estate ran down to the Exe estuary, and I spent all my days and many nights in the woods and fi elds, surrounded by nature, which I studied and painted. My early nautical subjects were predominantly World War II naval vessels,

and from there my interest spread to the age of sail. I began to show and sell some of my work in local galleries and book shops and eventuall y received several commi ss ions from a dealer to paint American whaling scenes. In 1976 I was commi ssioned by an American patron to visit New York and the Chesapeake Bay area to record my impress ions of the tall ships and the Bicentennial celebrations. I have also painted on board various Royal avy ships including the canier HMS A rk R oyal and the destroyer HMS Exeter. I am always intri gued by ships of any sort, but some more than others have a presence which is very hard to define . Perhaps it is a combination of the natural with man &#39;s own creations that I find deeply fascinating. Painting a subject from history makes a particular demand, as I can not simply go and look at the subject. I need ample data and , where possible, I go back to original source material , often making accurate models to aid understanding. But all the academic facts in the world will not make the picture, so what does?

&quot;Don&#39; t Give Up the Ship&quot; portrays the capture by HMS Shannon of USS Chesapeake, 1June 1813. Exhibited at the Royal Society of Marine Artists, 1984.

Where records have been kept they often yield mag ic ingredients that can be translated into art. I am not just painting a seascape; I a m searching for the spirit of the moment, and although the fi gures on deck will be very small and unidentifi able, they are the spark for the picture. I have painted several canvases depicting the acti o n between HMS Shannon and USS Chesapeake. The personalities of Captain Law rence and Captain Broke intrigued me, and I felt that knowing more about these men would help me understand the chain of thoughts and events that took them to that moment in time. Sometimes there are more tangible connections. If poss ible, I go to a location connected with the person or the ship. For example, I have in my studio several pieces of timber which I beli eve are yellow pitch pine and are part of USS Chesapeake. Thi s is how I came to know abo ut it. I was in a secondhand book shop in Annapoli s, Maryland, and came across some information that a Rev. Dr. Brighton had visited the Chesapeake Mill in