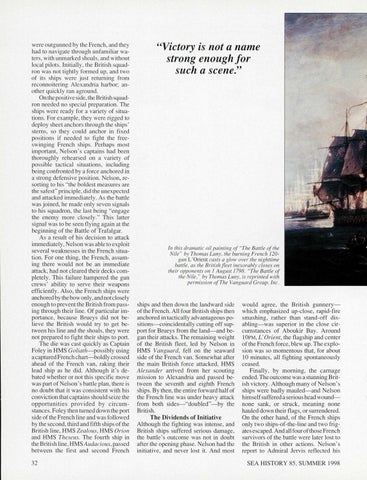 were outgunned by the French , and they had to navigate through unfamiliar waters , with unmarked shoals, and without local pilots. Initially, the British squadron was not tightly formed up, and two of its ships were just returning from reconnoitering Alexandria harbor; another quickly ran aground. On the positive side, the British squadron needed no special preparation. The ships were ready for a variety of situations. For example, they were rigged to deploy sheet anchors through the ships&#39; sterns, so they could anchor in fixed positions if needed to fight the freeswinging French ships. Perhaps most important, Nelson &#39; s captains had been thoroughly rehearsed on a variety of possible tactical situations, including being confronted by a force anchored in a strong defensive position. Nelson , resorting to his &quot;the boldest measures are the safest&quot; principle, did the unexpected and attacked immediately. As the battle was joined, he made only seven signals to his squadron, the last being &quot;engage the enemy more closely.&quot; This latter signal was to be seen flying again at the beginning of the Battle of Trafalgar. As a result of his decision to attack immediately, Nelson was able to exploit several weaknesses in the French situation. For one thing, the French, assuming there would not be an immediate attack, had not cleared their decks completely. This failure hampered the gun crews &#39; ability to serve their weapons efficiently. Also, the French ships were anchored by the bow only, and not closely enough to prevent the British from passing through their line. Of particular importance, because Brueys did not believe the Briti sh would try to get between his line and the shoals, they were not prepared to fight their ships to port. The die was cast quickly as Captain Foley in HMS Goliath- poss ibly using a captured French chart- boldly crossed ahead of the French van , raking their lead ship as he did. Although it &#39;s debated whether or not this specific move was part of Nelson&#39;s battle plan, there is no doubt that it was consistent with his conviction that captains should seize the opportunities provided by circumstances. Foley then turned down the port side of the French line and was followed by the second, third and fifth ships of the British line, HMS Zealous , HMS Orion and HMS Theseus. The fourth ship in the British line , HMSAudacious , passed between the first and second French

&quot;Victory is not a name strong enough for such a scene.&quot;

In this dramatic oil painting of &quot;The Battle of the Nile&quot; by Thomas Luny, the burning French 120gun L&#39;Orient casts a glow over the nighttime battle, as the British fl eet inexorably closes on their opponents on J August 1798. &quot;The Battle of the Nile,&quot; by Thomas Luny, is reprinted with permission of Th e Vanguard Group , Inc.

ships and then down the landward side of the French. All four British ships then anchored in tactically advantageous positions- coincidentally cutting off support for Brueys from the land-and began their attacks. The remaining weight of the British fleet, led by Nelson in HMS Vanguard, fell on the seaward side of the French van . Somewhat after the main British force attacked, HMS Alexander arrived from her scouting mi ssion to Alexandria and passed between the seventh and eighth French ships. By then , the entire forward half of the French line was under heavy attack from both sides- &quot;doubled&quot;-by the British. The Dividends of Initiative Although the fighting was intense, and British ships suffered serious damage, the battle &#39;s outcome was not in doubt after the opening phase. Nelson had the initiative, and never lost it. And most

would agree, the British gunnerywhich emphasized up-close, rapid-fire smashing, rather than stand-off disabling-was superior in the close circumstances of Aboukir Bay. Around lOPM, L&#39; Orient, the flagship and center of the French force, blew up. The explosion was so momentous that, for about 10 minutes, all fighting spontaneously ceased. Finally, by morning, the carnage ended. The outcome was a stunning British victory . Although many of Nelson &#39;s ships were badly mauled-and Nelson himself suffered a serious head woundnone sank, or struck, meaning none hauled down their flags, or surrendered. On the other hand, of the French ships ~ly two ships-of-the-line and two frigates escaped. And all fourof those French survivors of the battle were later lost to the British in other actions. Nelson &#39;s report to Admiral Jervis reflected his SEA HISTORY 85 , SUMMER 1998