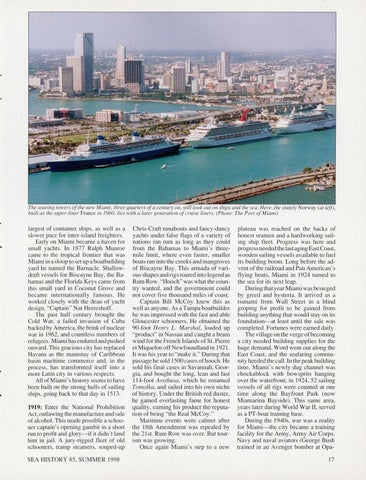 The soaring towers of the new Miami , three quarters of a century on, still look out on ships and the sea . Here, the stately Norway (a t leji) , built as the super-liner France in 1960, lies with a later generation of cruise liners. (Photo: The Port of Miami)

largest of container ships, as well as a slower pace for inter-island fre ighters. Earl y on Mi ami became a haven for small yachts. In 1877 Ralph Munroe came to the tropical frontier that was M iami in a sloop to set up a boatbuilding yard he named the Barnacle. Shallowdraft vessels fo r Biscayne Bay, the Bahamas and the Florida Keys came fro m thi s small yard in Coconut Grove and became internationally fa mous. He worked closely with the dean of yacht design, &quot;Captain&quot; Nat Herreshoff. The past half century brought the Cold War, a failed invasion of Cuba backed by America, the brink of nuclear war in 1962, and countless numbers of refugees. Miami has endured and pushed onward. This gracious city has repl aced Havana as the mainstay of Caribbean bas in maritime commerce and, in the process, has transformed itself into a more Latin city in various respects. All of Miami &#39;s history seems to have been built on the strong hull s of sailing ships, going back to that day in 1513.

Chris-Craft runabouts and fa ncy-dancy yachts under false fl ags of a variety of nations ran rum as long as they could from the Bahamas to Miami &#39;s threemile limit, where even fas ter, smaller boats ran into the creeks and mangroves of Biscayne Bay. Thi s armada of various shapes and rigs roared into legend as Rum Row. &quot;Hooch&quot; was what the country wanted, and the government could not cover five thousand miles of coast. Captain Bill McCoy knew this as well as anyone. As a Tampa boatbuilder he was impressed with the fas t and able Glouceste r schooners. He obtained the 90-foot Henry L. Marshal, loaded up &quot;product&quot; in Nassau and caught a beam wind for the French Islands of St. Pierre et Miquelon off Newfoundland in 1921. It was his year to &quot;make it. &quot; During that passage he sold 1500 cases of hooch. He sold his fi nal cases in Savannah, Georgia, and bought the long, lean and fas t 114-foot Arethusa, which he renamed Tomolka, and sailed into hi s own niche of history. Under the British red duster, he gained everlasting fame for honest quality , earning hi s product the reputation of being &quot;the Real McCoy. &quot; Maritime events were calmer after the 18th Amendment was repealed by the 21st. Rum Row was over. But tourism was grow ing. Once agai n M iami &#39;s step to a new

plateau was reached on the backs of honest seamen and a hardworking sailing ship fleet. Progress was here and progress needed the last aging East Coast, wooden sailing vessels available to fu el its building boom. Long before the advent of the railroad and Pan Ameri can&#39;s fl ying boats, Miami in 1924 turned to the sea fo r its next leap . During that year Miami was besieged by greed and hysteria. It arrived as a tsunami from Wall Street in a blind groping fo r profit to be gained from building anything that would stay on its fo undation-at least until the sale was completed. Fortunes were earned daily. The vill age on the verge of becoming a city needed building supplies fo r the huge demand. Word went out along the East Coast, and the seafaring community heeded the call. In the peak building time, M iami &#39;s newly dug channel was chockablock with bowsprits hanging over the waterfront; in 1924 , 52 sailing vessels of alJ rigs were counted at one time along the Bayfront Park (now Miamarina Bayside). This same area, years later during World War II, served as a PT-boat training base. During the 1940s, war was a reality for Mi ami- the city became a training fac ility for the Army, Anny Air Corps, Navy and naval aviators (George Bush trained in an Avenger bomber at Opa17