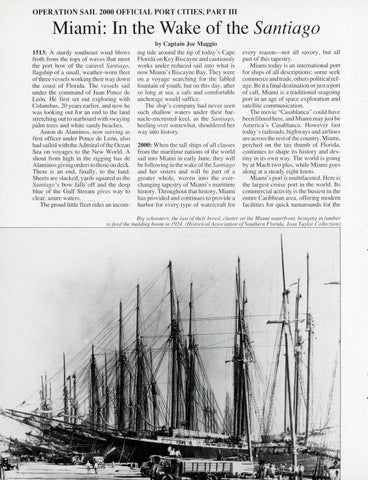 Miami: In the Wake of the Santiago by Captain Joe Maggio

1513: A sturd y southeast wind blows froth from the tops of waves that meet the port bow of the caravel Santiago, flagship of a small , weather-worn fleet of three vessels working their way down the coast of Florida. The vesse ls sai l under the command of Juan Ponce de Le6n. He first set out exploring with Columbus, 20 years earlier, and now he was looking out for an end to the land stretching out to starboard with swaying palm trees and white sandy beaches. Anton de Alaminos , now serving as first officer under Ponce de Le6n , also had sai led with the Admiral of the Ocean Sea on voyages to the New World. A shout from hi gh in the rigging has de Alaminos giving orders to those on deck. There is an end, finally , to the land. Sheets are slacked, yards squared as the Santiago&#39;s bow falls off and the deep blue of the Gulf Stream gives way to clear, azure waters. The proud little fleet rides an incom-

ing tide aro und the tip of today &#39;s Cape F lorida on Key Biscayne and cautiously works under reduced sail into what is now Miami &#39;s Biscayne Bay. They were on a voyage searching for the fabled fo untain of yo uth , but on thi s day, after so long at sea, a safe and comfortable anc horage wou ld suffice. The ship&#39;s company had never seen such shallow waters under their barnacle-encrusted keel , as the Santiago, heeling over somewhat, shouldered her way into history .

2000: When the tall ships of all classes from the maritime nations of the world sail into Miami in early June, they wi ll be following in the wake of the Santiago and her sisters and will be part of a greater whole , woven into the everchanging tapestry of Miami&#39;s maritime history. Throughout that hi story, Miami has provided and continues to provide a harbor for every type of watercraft for

every reason-not all savory, but all part of this tapestry . Miami today is an international port for ships of all descriptions; some seek commerce and trade, others political refuge. Be it a final destin ation or just a port of call , Miami is a traditional seagoi ng port in an age of space exp loration and satellite communication. The movi e &quot;Casablanca&quot; could have been filmed here, and Miami may just be America&#39;s Casablanca. However fast today &#39;s railroads, highways and airlines are across the rest of the country, Miami, perched on the tan thumb of Florida, conti nues to shape its hi story and destiny in its own way. The world is go ing by at Mach two plus, while Miami goes a long at a steady eight knots. Miami &#39;s port is multifaceted. Here is the largest crui se port in the world . Its commerc ial activity is the busiest in the entire Caribbean area, offering modern facilities for quick turnarounds for the

Big schooners, the last of their breed, cluster on the Miami waterjiÂˇont, bringing in lumber to feed the building boom in 1924. (Historical Association of Southern Florida, Jean Taylor Collection)