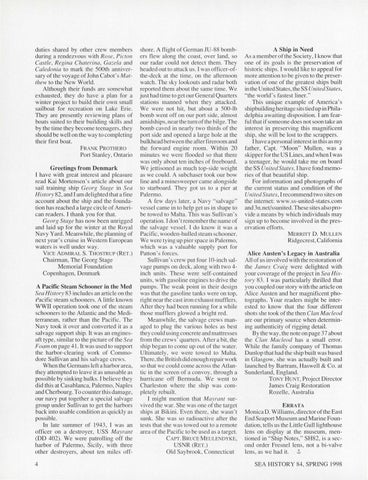 duties shared by other crew members during a rendezvous with Rose, Picton Castle, Regina Chaterina , Gaze/a and Caledonia to mark the 500th anniversary of the voyage of John Cabot&#39;s Matthew to the New World. Although their fund s are somewhat ex hausted, they do have a pl an for a winter project to build their own small sailboat for recreation on Lake Erie. They are presently rev iew ing pl ans of boats suited to their building skill s and by the time they become teenagers, they should be well on the way to completing their first boat. FRANK PROTH ERO Po11 Stanley, Ontario

Greetings from Denmark I have with great interest and pleasure read Kai Mortensen&#39;s artic le about our sail training ship Georg Stage in Sea History 82, and I am delighted that a fine account about the ship and the foundation has reached a large circle of American readers . I thank you for that. Georg Stag e has now been unrigged and laid up for the winter at the Royal Navy Yard . Meanwhile, the planning of next year&#39;s cruise in Western European waters is well under way. VICE ADMIRALS. THOSTRUP (RET.) Chairman, T he Georg Stage Memorial Foundation Copenhagen, Denmark

A Pacific Steam Schooner in the Med Sea History 83 includes an article on the Pacific steam schooners. A littl e known WWII operation took one of the steam schooners to the Atlantic and the Mediterranean , rather than the Pac ific. The Navy took it over and converted it as a salvage support ship. It was an eng inesaft type, similar to the picture of the Sea Foam on page 41. It was used to support the harbor-clearing work of Commodore Sullivan and his salvage crews. When the Germans left a harbor area, they attempted to leave it as unu sable as possible by sinking hulks. I believe they did this at Casablanca, Palermo, Naples and Cherbourg. To counter thi s damage, our navy put together a special sa lvage group under Sullivan to get the harbors back into usable condition as quickly as possible. In late summer of 1943, I was an officer on a destroyer, USS Mayrant (DD 402). We were patrolling off the harbor of Palermo, Sici ly, with three other destroyers , about ten miles off4

shore. A flight of German JU-88 bombers flew along the coast, over land, so our radar could not detect them . They headed out to attack us. I was officer-ofthe-deck at the time, on the afternoon watch. The sky lookouts and radar both reported them abo ut the same time. We just had time to get our General Quarters stations manned when they attacked. We were not hit, but about a 500-lb bom b went off on our port side, almost amidships, near the turn of the bilge. The bomb caved in nearly two th irds of the port side and opened a large hol e at the bulkhead between the after fire room and the forward eng ine room. Within 20 minutes we were flooded so that there was only about ten inches of freeboard. We jettisoned as much top-side weight as we could. A subchaser took our bow line and a minesweeper came alongside to starboard. They got us to a pier at Palermo. A few days later, a Navy &quot;salvage&quot; vessel came in to he lp get us in shape to be towed to Malta. This was Sullivan&#39;s operation. I don&#39;t remember the name of the salvage vessel. I do know it was a Pacific, wooden-hulled steam schooner. We were tying up pier space in Palermo, which was a valuable suppl y port for Patton &#39;s forces. Sullivan &#39;s crew put fo ur 10-inch salvage pumps on deck, along with two 4inch units. These were self-contained units, with gaso line engines to drive the pumps. The weak point in their design was that the gasoline tanks were on top, right near the cast iron exhaust mufflers. After they had been running for a while those muffl ers glowed a bright red. Meanwhile, the salvage crews managed to plug the various holes as best they could using concrete and mattresses from the crews&#39; quarters. After a bit, the ship began to come up out of the water. Ultimately, we were towed to Malta. There, the British did enough repair work so that we could come across the Atlantic in the screen of a convoy, through a hurricane off Bermuda. We went to Charleston where the ship was completely rebuilt. I mi ght mention that Mayrant survived the war. She was one of the target ships at Bikini. Even there, she wasn &#39; t sunk. She was so radioactive after the tests that she was towed out to a remote area of the Pacific to be used as a target. CAPT. BRUCE MEULENDYKE, USNR (RET.) Old Saybrook, Connecticut

A Ship in Need As a member of the Society, I know that one of its goals is the preservation of historic ships. I would like to appeal for more attention to be given to the preservation of one of the greatest ships built in the United States, the SS United States, &quot;the world &#39;s fastest liner. &quot; Thi s unique example of America&#39;s shipbuilding heritage sits tied up in Philadelphi a awa iting disposition . I am fearful that if someone does not soon take an interest in preserving thi s magnificent ship, she wi ll be lost to the scrappers. I have a personal interest in thi s as my father, Capt. &quot;Moon&quot; Mullen, was a skipper for the US Lines , and when I was a teenager, he would take me on board the SS United States. I have fond memories of that beautiful ship. For information and photographs of the current status and condition of the Un ited States, I recommend two sites on the internet: www.ss-united-states.com and 3n.net/ssunited. These sites also provide a means by which individuals may sign up to become in volved in the preservation efforts. MERRITT D. MULLEN Ridgecrest, California

Alice Austen&#39;s Legacy in Australia A lI of us involved with the restoration of the James Craig were delighted with your coverage of the project in Sea History 83. I was particularly thrilled that yo u coupled our story with the article on Alice Austen and her magnificent photographs. Your readers might be interested to know that the four different shots she took of the then Clan Macleod are our primary source when determining authenticity of rigging detail. By the way, the note on page 3 7 about the Clan Macleod has a small error. While the family company of Thomas Dunlop that had the ship built was based in Glasgow, she was actually built and launched by Bartram, Haswell &amp; Co. at Sunderland, England. TONY HUNT, Project Director James Craig Restoration Roze lle, Australia ERRATA MonicaD. William s, directoroftheEast End Seaport Museum and Marine Foundation, tell s us the Little Gull lighthou se lens on di sp lay at the museum , mentioned in &quot;Ship Notes,&quot; SH82, is a second order Fresnel lens, not a bi-valve lens, as we had it. tSEA HISTORY 84, SPRING 1998